x
Project 39A at National Law University, Delhi has released a study analysing trial court death penalty judgments from Madhya Pradesh, Maharashtra and Delhi during the period 2000-2015
Your free access to Live Law has expired
To read the article, get a premium account.

Project 39A has released a report titled DeathPenalty Sentencing in Trial Courts: Delhi, Madhya Pradesh and Maharashtra(2000-2015) containing findings from a study of all capital cases decided by trial courts of Delhi, Madhya Pradesh and Maharashtra between 2000 and 2015. Analysing 215 judgments (43 from Delhi, 82 from Madhya Pradesh, and 90 from Maharashtra), the report exposes the hollowness of sentencing hearings that are conducted. Combining empirical analysis and doctrinal critique, substantial parts of the report are also dedicated to demonstrating the normative and procedural gaps in death penalty sentencing framework that have been the legacy of the Bachan Singh judgment and the numerous inconsistencies in Supreme Court judgments in the 40 years thereafter.

Contrary to the Constitution Bench decision in Bachan Singh (1980) which emphasised the relevance of mitigating factors in capital sentencing, trial courts heavily relied only on aggravating circumstances of the crime to decide the outcome. In 51% of the 215 trial court judgments, mitigating circumstances were not considered. Further, in complete defiance of the spirit of individualised justice envisaged in s.235(2) CrPC, 44% cases involved sentencing on the same day as conviction. In addition, the trials courts did not consider the default punishment of life imprisonment in 73% cases while deciding between life imprisonment and the death sentence. It would, however, be incorrect to attribute complete blame for a broken state of capital sentencing in trial courts exclusively to these courts themselves.

The report also comments on the challenge in collating trial court judgments and records. Observing the lack of effective implementation of digitisation strategies, the report states that a large proportion of judgments had to be physically collected from records rooms across different High Court benches after due authorisation. 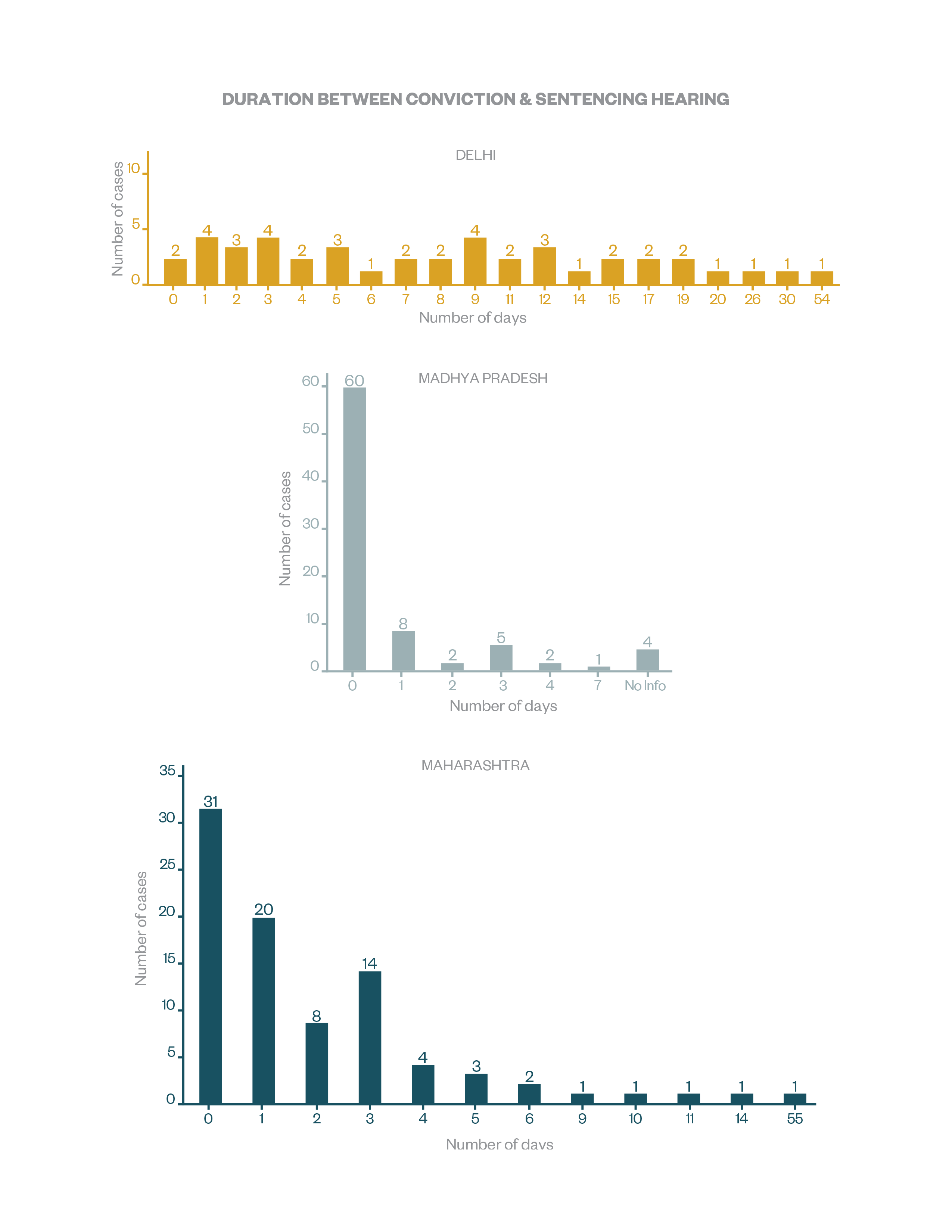 Trial courts across the three states used a crime-centric approach to impose the death penalty, and dismissed mitigating circumstances without any meaningful consideration. Resultantly only aggravating factors were used to impose the death penalty, most of which centrered around brutality of the crime. For instance, in one of the cases from Madhya Pradesh, the trial court observed: "Can any mitigating circumstance be a reason for such a beastly act? Can such a person gain mercy and sympathy from society? Can such a person have repentance for his deeds and reform for the good? Should the court allow such a person to live a grand life after serving the punishment?" 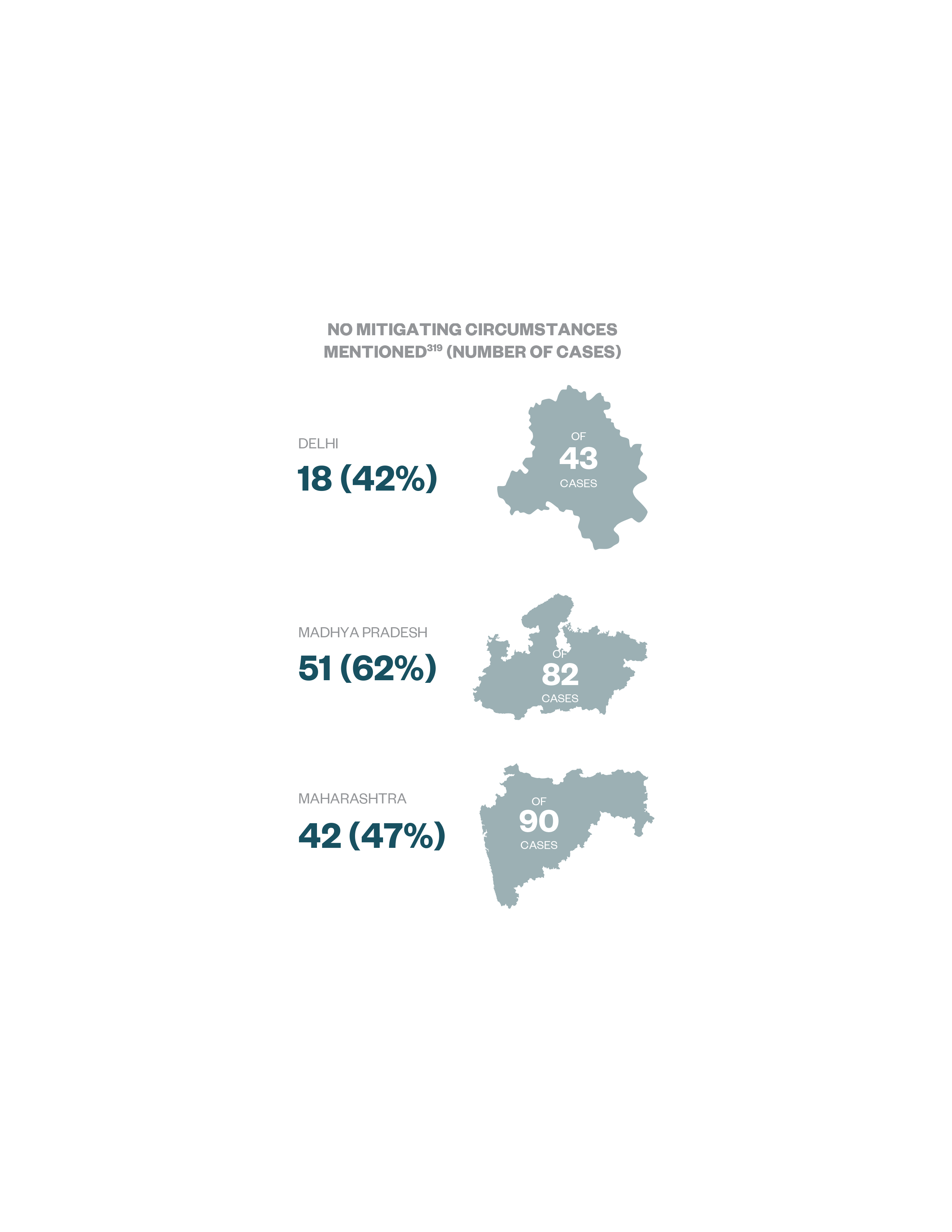 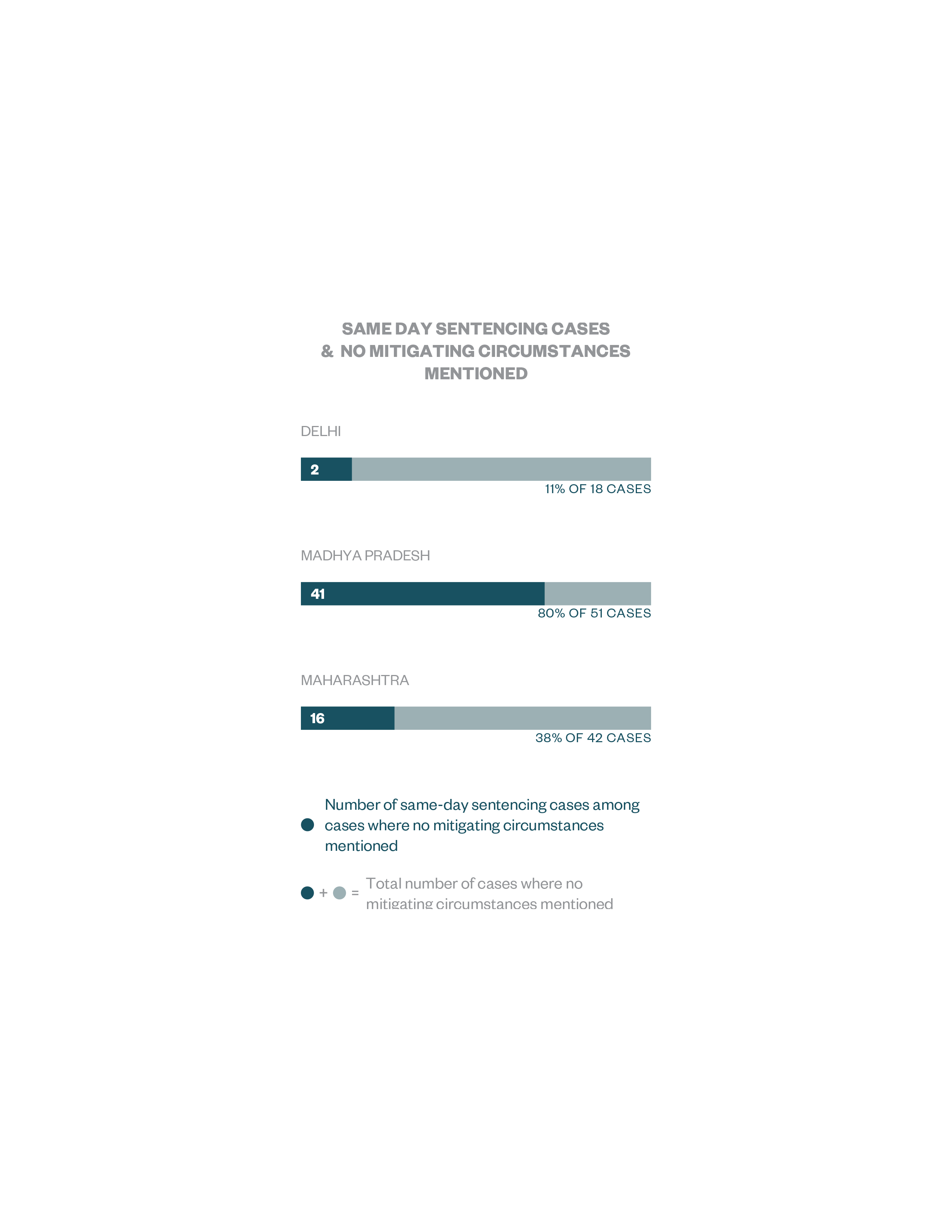 While creating a sentencing framework for courts deciding between life imprisonment and the death penalty, Bachan Singh had placed no importance on the role of public opinion in deciding the outcome. Three years later, a 3-judge bench in Machhi Singh v. State of Punjab (1983) made public opinion relevant to capital sentencing by stating that the death penalty might be deserved in cases where the conscience of the society is so shocked as to warrant the imposition of the death penalty. Subsequently, satisfying the collective conscience and society's cry for justice have been used frequently by the Supreme Court to impose the death penalty. Despite frequent usage, this approach has been critiqued by the Supreme Court itself in Santosh Kumar Satishbhushan Bariyar v. State of Maharashtra, for want of clarity around the meaning of 'public conscience' and the counter-majoritarian role of courts.

The Report finds that trial courts across Delhi, Madhya Pradesh and Maharashtra have frequently invoked collective conscience, to the complete exclusion of mitigating factors. 31 cases in Delhi, 35 in Madhya Pradesh and 46 in Maharashtra used this as a relevant factor in deciding appropriate punishment. Of these total 112 cases, in 63 cases the courts considered absolutely no mitigating factors. 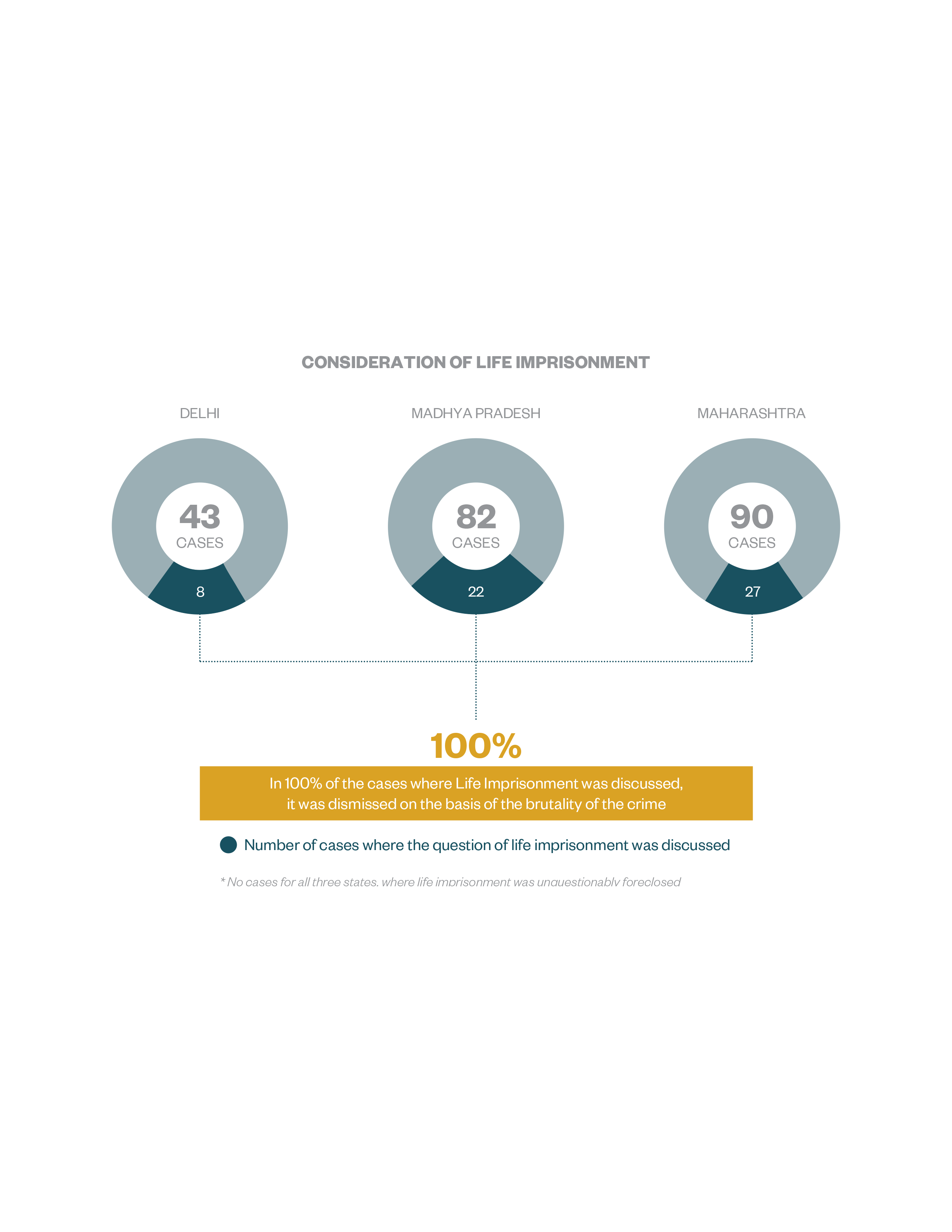 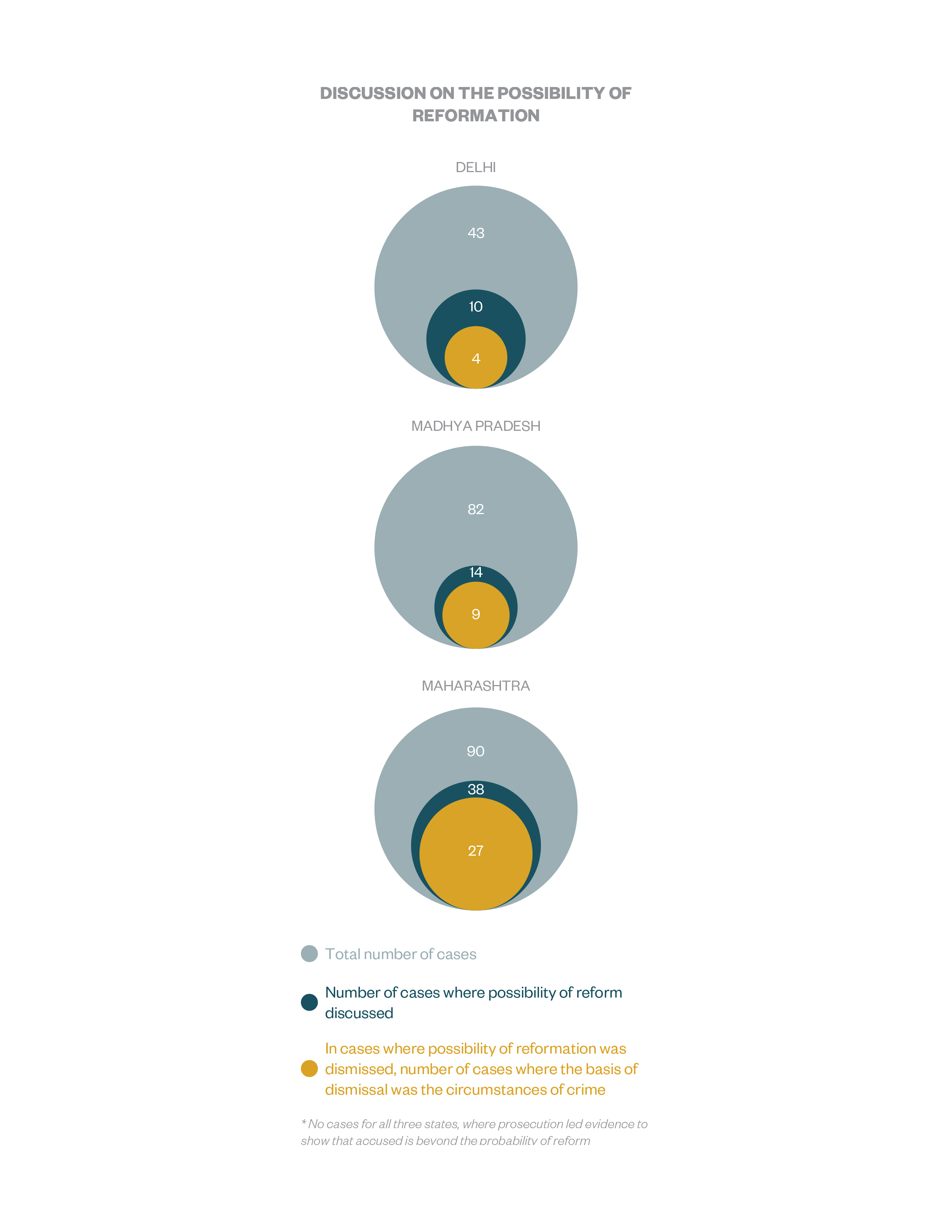 Comparing the data in this Report from 2000-2015 with Project 39A's Annual Death Penalty Statistics for 2016-19 shows interesting patterns about increased imposition of the death penalty for murders invovling sexual violence.

For the period 2000-15, the Report finds that 49% of the death sentencess for murder simpliciter, while 28% had the death penalty imposed for murder involving sexual ofences. In Madhya Pradesh, however, sexual violence comprised a higher proportion of 36% of the total death sentences, as compared to 25% in Maharashtra and 23% in Delhi.

The full report can be read here.