[M.J. Akbar V. Priya Ramani] I Am Shocked To See How, By The Power Of A Pen, A Person Can Be Called A Predator: Sr. Adv. Geeta Luthra 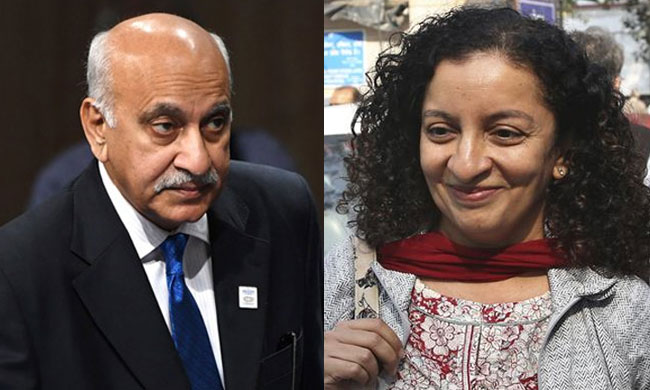 Main thrust of Ms. Geeta Luthra's arguments was how Ms. Priya Ramani's statement by calling him a predator had tarnished Mr. Akbar's reputation in public life. According to her, Ms. Ramani and her counsel, Sr. Adv. Rebecca John had failed to adduce any evidence or material on record that could prove the serious allegations made against the complainant.

"They have defined him as the biggest predator of media. If you defame a person's reputation, you need to bring proof for it. You have not done any investigation. They do not have a proof because they did not approach the court of law." She argued.

Ms. Geeta Luthra further argued that the accused, Ms. Ramani had failed in taking recourse of law thereby her actions do not fall within the boundaries of due process. According to Ms. Luthra, in order to initiate a criminal case, one must have a cause of action subsequent to which a complaint has to be filed. According to Ms. Luthra, Ms. Ramani had none.

On the point of there being no law on the subject of sexual harassment at workplace at the time when the incident happened, Ms. Luthra argued that even if the law came years later, the accused had recourse of Indian Penal Code which is in the legal textbooks since 1860.

"What is her defense to support calling Mr. Akbar a predator? What basis prior to 2017 she has shown on which she as a journalist has proved this? This is a case of res ipsa loquitur. It's a case which is per se defamatory." She argued.

Furthermore, she argued on the meaning of the word "predator" by relying on Advanced Law Lexicon which defines a sexual predator as a person who has committed many violent sexual acts or who has the propensity of doing so. She also relied on the Black Law Dictionary which defines a predator as anyone who is sexually dangerous person.

"I am shocked to see how by the power of a pen a person can be called a predator. A predator is more powerful than his prey. She is a journalist. She should know the meaning of the words. It is with the brush of a pen, you can spoil somebody's reputation without any proof." She argued.

Another issue raised by Ms. Geeta Luthra in her arguments was that the accused Ms. Priya Ramani has heavily relied on various articles in the Vogue magazine, New York Times and the New Yorker. However, she has failed to prove the contents of her allegations. '

She argued that in order to prove that the contents of an article is correct, the proof can only be given after the author of such article is called in the court of law to verify its contents thereof, which in this case wasn't done.

"The basic principle under Indian Evidence Act is if a person writes something, only the author can be called to verify it. They didn't produce any witness with regards to the documents. Ms. Priya Ramani was the person who maligned Mr. Akbar and that her tweets were circulated, whatever she said spread like wild fire." She submitted.

Thereafter, she relied on the judgment of G. Chandrasekhara Pillai v. K. Karthikeyan (1964) Ker 277 wherein the Kerela High Court held that "it cannot be disputed that the burden is on the accused to make out that his case would come under any one of the exceptions under sec. 499 of IPC". Therefore, she argued that the onus of proving the allegations rests with the accused which she has not discharged.

Reliance was also made to the judgment of Malay Kumar Ganguly v. Sukumar Mukherjee & Ors. (2009) wherein the Supreme Court held that "A document becomes inadmissible in evidence unless author is examined; the contents cannot be held to have been proved unless he is examined and subjected to cross- examination in a court of law."

"You haven't produced the author. This aspect is based on an inadmissible document so this defense is not opened. From all my witnesses no such question has been put. No cross examination was done." She argued.

The matter is now scheduled to be heard on 18th January 2021.