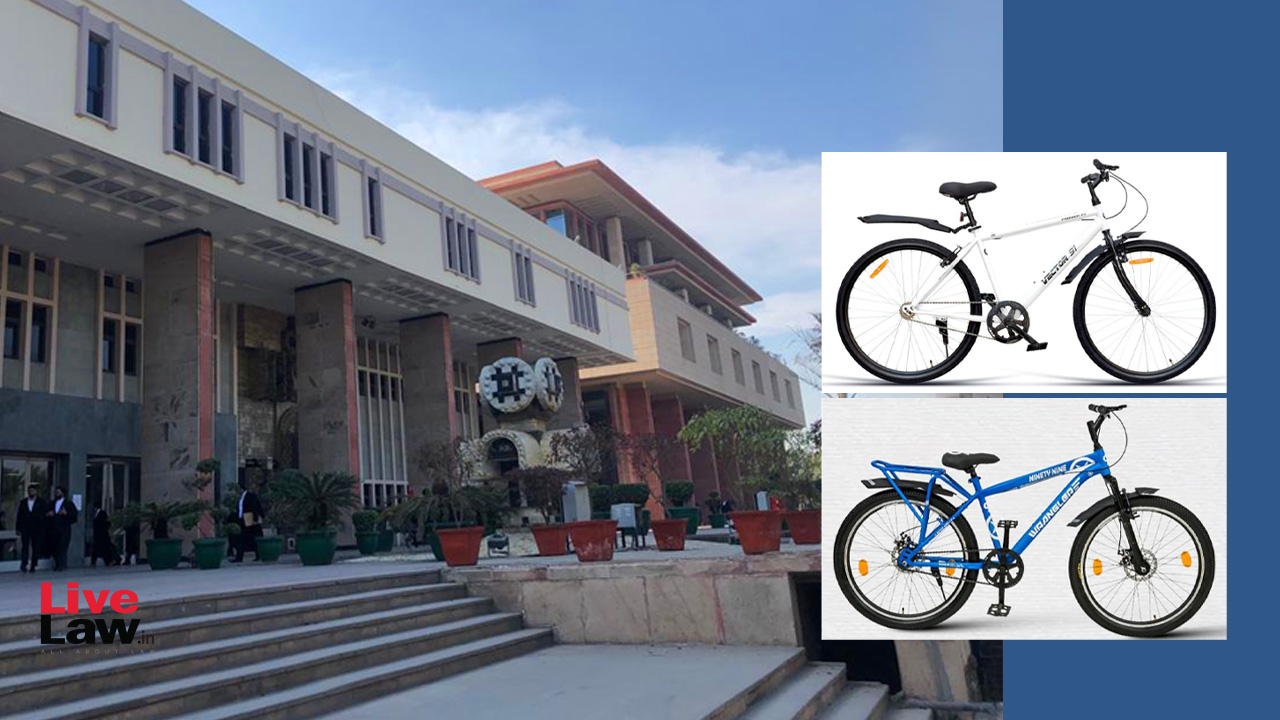 Observing that bicycles by their very nature are bought by a large swathe of population which could also include semi-illiterate persons, the Delhi High Court has halted the fresh manufacturing of 'NINETY NINE/99' cycles as it found its mark "deceptively or confusingly similar" to the name of 'NINETY ONE/91' cycles which are produced by a different company.

"The competing marks can be easily confused and the same can be in the form of sponsorship or affiliation. Consumers may be deceived to believe that both bicycles originate from the same manufacturers and the marks 'NINETY NINE/99' and 'NINETY ONE/91' are series marks," said Justice Prathiba M. Singh.

The plaintiff told the court that it was incorporated in 1987 and started the bicycle production business in 2015. The mark 'NINETY ONE/91 was adopted by it in 2020. The company's counsel further told the court that it is engaged in the business of design, distribution and sale of bicycles for various genders, across age groups in India under various names like 'NINETY ONE', '91 CARES', 'OUTDOORS91' and others. The company has registration for five marks including 91 CARES, OUTDOORS91, VECTOR 91.

It was argued though adoption of the 'NINETY ONE/91' mark is recent but the company within a short period has acquired substantial reputation and goodwill, and also invested a substantial sum on advertising. The court was also informed that the company has "pending applications for the mark 'NINETY ONE' in word and device form on a standalone basis in class 12' but a third party has opposed the same.

During a recent hearing, Advocate Aditya Gupta told the court that defendants initially started their business under the mark 'SACHIN' and continued to use various other marks such as 'SACHIN BIKES', 'SACHIN CROCS' and 'SACHIN DUNALIZX' since 2018. It was only in July 2021 that they started using the mark 'NINETY NINE/99' on their Facebook page, the court was told.

It was also submitted that the plaintiff contacted the defendants in August 2021 and informed them about the similarity and the confusion being caused by it. Gupta told the court that though defendants undertook to change the mark but thereafter reneged from the undertaking.

In response to a query whether there can be a monopoly on numbers, advocate Gupta relied upon the book McCarthy On Trademarks (2017 edition) and also the judgement of a single bench in M/s Vrajlal Manilal & Co. v. Adarsh Bidi Co.

The court said the author J. Thomas McCarthy has opined that in the case of letter and number marks, the marks would have to be compared on the basis of similarity. Referring to the single bench decision, the court said it was accepted that numerics can be used as a trademark and rights can be acquired in such marks by use.

"In the present case, the mark adopted by the Plaintiff and used since 2020 being 'NINETY ONE/91' prima facie appears to have acquired goodwill even within a short period which is evident from the sale figures of the products of the Plaintiff. Moreover, the e-mail correspondence which has been placed on record thus shows that the Defendants may have assured the Plaintiff but then later resiled from the same," it said.

Observing that defendants may have adopted the 'NINETY NINE/99' mark due to the popularity of plaintiff's mark, the court said it is prima facie convinced that some interim protection ought to be granted to the plaintiff "in the light of the earlier correspondence with the Defendants".

Restraining the defendants from making any fresh manufacture of bicycles under the mark 'NINETY NINE/99' in numeric form or in word form or any other mark similar to the plaintiff's mark, the court appointed a Local Commissioner for preparing inventory of the already manufactured bicycles.

"Insofar as use of the mark 'NINETY NINE/99 on online platforms is concerned, the Defendants shall immediately cease use of the said mark either in numeric form or in word form in respect of bicycles," said the court, while listing the matter for hearing on January 11, 2023.

The court has also asked the Local Commissioner to visit the premises of Sach Industries in Ludhiana district of Punjab by October 25 and submit a report within two weeks.