'Demitting Office With Fullest Satisfaction Of Having Discharged My Responsibilities As Per Constitution': Justice JR Midha Bids Farewell To Delhi HC 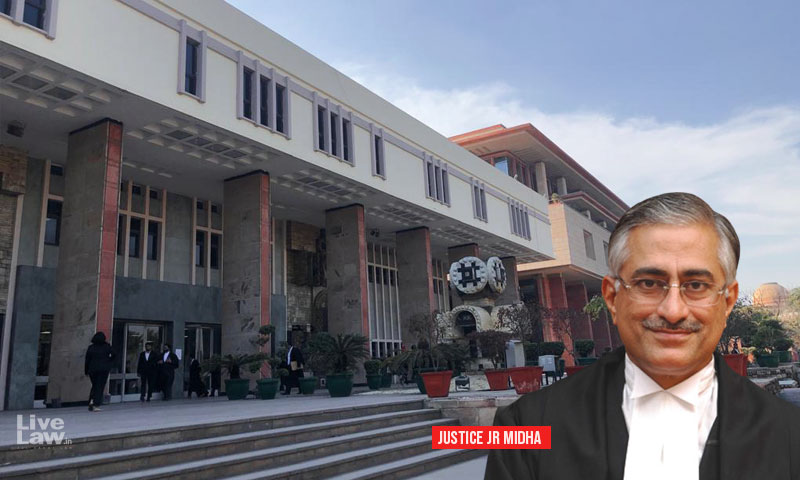 "A judge's job is to impart justice. I'm demitting office today with fullest satisfaction of having discharged my responsibility as per constitution, be it the district Court or this Court," said Justice JR Midha in his virtual farewell function organized by the Delhi High Court on Wednesday.Justice JR Midha retired from the Delhi High Court today, after serving there as an Additional Judge...

"A judge's job is to impart justice. I'm demitting office today with fullest satisfaction of having discharged my responsibility as per constitution, be it the district Court or this Court," said Justice JR Midha in his virtual farewell function organized by the Delhi High Court on Wednesday.

Justice JR Midha retired from the Delhi High Court today, after serving there as an Additional Judge from 11th April, 2008 and as permanent Judge from 6th July, 2011.

The Judge began his address by bowing down before his parents with whose blessings he achieved the position. "Next I bow down to the lord who guided me to discharge my duties. I then bow down before the God inside all of you," he said.

Before moving ahead with his farewell speech, Justice Midha paid homage to the departed souls of former colleagues, counsels, judges and Court staff who lost their lives due to Covid-19.

"Today is the judgment day as the Bar is the judge of the judges. The bar of the Delhi High Court is the best bar in the country and I'm proud to be a part of it from 1982 onwards," he said while remembering his early life in the legal profession.

Highlighting his struggles of entering the legal profession without any 'godfather' or legal backing in the field, Justice Midha said:

"When I joined the bar at 1982, I had no godfather from the legal background. I came from a very modest background and struggled a lot in my journey."

"I had never thought of or dreamt of having reached this position. I have to say that our judicial system is very strong and because of its fundamentals, the lawyers without any godfather, can be elevated to this position," he added.

Justice Midha then shared his fond memories with the audience, starting with how Justice Mudgal recommended his name to then Chief Justice Shah after knowing his vision and contribution in motor vehicle cases.

"Chief Justice Shah then invited me and said I'm giving you the motor vehicle roster but you have to decide atleast 5 appeals a day. I said I'll decide 10 appeals. But with my passion, I started deciding 15 appeals a day," Justice Midha recalled.

"India has got highest numbers of motor accident numbers. The number is so high that even Covid-19 will feel small in front of it. We have 6 lakh accidents in one year resulting in one and half lakh deaths, meaning one accident every minute and one death 3.5 minutes."

As Justice Midha went ahead to share his experiences as a judge, he made sure of thanking every person who helped him reach to the position by saying "I belonged to a middle class family. I lost my father when I was 13. I had taken science stream in my school and after two unsuccessful attempts for admission to medical course, I joined law with no godfather. I joined this profession with no confidence as to how I will succeed in this profession. Today I thank every person who helped me reach here."

Justice Midha also thanked the advocates who helped him as an amicus curiae by providing their assistance to him in rendering landmark judgements. He specially thanked Justice Anup J Bhambhani, who had assisted him as an amicus before becoming a Judge of the Delhi High Court.

He also thanked his former and present court staff, interns, law researchers and domestic staff for their immense contribution and hard work.

"A judge is the visible face of the justice delivery system. What goes on behind is sheer dedication and sincerity of the staff," Justice Midha expressed.

Showing his love for his five dogs, Justice Midha said "I couldn't spare sufficient time for my five pet dogs. I hope to spend more time with them."

"In my view, meditation is of immense help in discharging these judicial functions. Judge's job is to impart justice. I'm demitting office today with fullest satisfaction of having discharged my responsibility as per constitution, be it the district court or this court."

"As the curtain drops, I wish to complete my spiritual journey. During my tenure I could not devote sufficient time to my inner journey. I treated my judicial work as meditation."

"One last thing I'll say. When I was elevated, I was almost like ice, I was solid. But with the warmth and love of the Bench and Bar, I melted and became water. But in last six days, the blessings that you all have showered on me, the entire water is evaporated and now I will live in your hearts."

The virtual farewell ended after Justice Midha played the song "Shukriya" as a gesture to be thankful to his life for giving him the opportunity to become a judge of the Court.

"The last thanks giving I want to give is to my own life," he said while bidding farewell to the High Court.