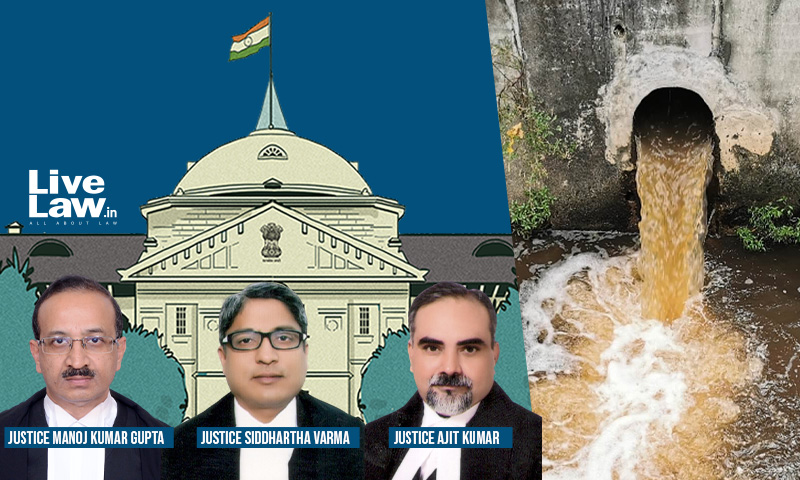 The Allahabad High Court recently directed two premier institutions of India, IIT Kanpur and IIT BHU, Varanasi to test the samples and submit a report regarding the quality of water in rivers, Ganga & Yamuna.Importantly, while taking into account the complaints regarding sewage water falling directly into the two rivers, the Bench of Justice Manoj Kumar Gupta, Justice Siddhartha...

The Allahabad High Court recently directed two premier institutions of India, IIT Kanpur and IIT BHU, Varanasi to test the samples and submit a report regarding the quality of water in rivers, Ganga &  Yamuna.

Importantly, while taking into account the complaints regarding sewage water falling directly into the two rivers, the Bench of Justice Manoj Kumar Gupta, Justice Siddhartha Varma, and Justice Ajit Kumar also constituted a committee to get samples drawn from different points of the rivers, Ganga and Yamuna.

Essentially, the Court was dealing with a Public Interest Litigation (PIL) petition filed by Advocate V. C. Srivastava complaining that during nighttime, the sewerage treatment plants are shut down and the sewage water is directly discharged into rivers Ganga and Yamuna.

It was submitted by A. K. Gupta, Amicus and V. C. Srivastava (petitioner) that at the point of discharge of effluents from untapped nalas, which are being treated by the so-called process of bio-remediation, it is visible to naked eyes that there is discolouration of the water and that it emits foul smell and water is not fit even for bathing.

Since the Court was not satisfied with the report of the Uttar Pradesh Pollution Control Board regarding the collection of samples and a subsequent report regarding the quality of the water, the Court constituted this committee and directed thus:

"Four number of samples from each point shall be drawn. One set shall be used by U.P. Pollution control Board for testing and the report thereof shall be supplied to this Court in a sealed cover on or before the next date. Two set of each sample shall be sent for testing to I.I.T., Kanpur and I.I.T., B.H.U. One set of each sample shall be preserved and shall be produced before this Court on the next date of hearing. We request the Director, I.I.T. Kanpur and Director, I.I.T., B.H.U. to assist the Court in getting the samples tested and submit report in a sealed cover directly to this Court through the Registrar General so as to be available on or before the next date"

Electric Crematorium and Shifting of Burial places which are in close vicinity of bathing Ghats:-

Noting that there are two electric crematoriums in Allahabad and most of the time, they are non-functional, the Court asked the Government and Nagar Nigam to improve the quality of infrastructure of electric crematoriums so that more and more people are attracted to avail the said service instead of burying the bodies on open ghats, adding to the gradual depletion of forest cover and pollution in the two rivers.

In view of this observation, the Court also directed the Nagar Ayukt, Nagar Nigam, Prayagraj to forthwith make proper arrangements for non-stop running of electric crematoriums.

"There should be a proper backup arrangement for power supply, basic amenities for sitting, drinking water and toilets. The Nagar Ayukt shall file his personal affidavit disclosing the steps taken by him in compliance of the above direction," the Court added while calling upon the Nagar Ayukt, Nagar Nigam Prayagraj and Additional Secretary, Urban Development, to specify the proposed steps to be taken so as to improve the infrastructure of the two crematoriums in Prayagraj."

Regarding the issue of Sale and Recycling of Plastic bags and other items, the Court directed the Commissioner, Allahabad Division, Allahabad to constitute a team to supervise and implement the ban on use, manufacture, sale, distribution, storage, transport, import and export of all kinds of plastic carry bags of thickness less than 50 microns.

The Commissioner has been directed to call for a status report from the said team on a fortnightly basis and to personally supervise the implementation of the ban and file an affidavit of compliance before this Court on the next date, i.e., on November 12, 2021.