"We Have To Compensate People Dying Due To Lack Of Oxygen":Delhi High Court Directs Delhi Govt. To Provide Details 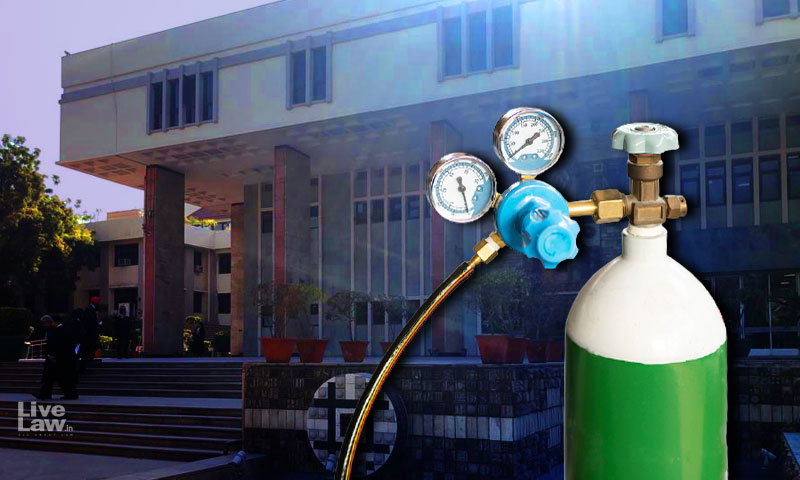 The Delhi High Court on Tuesday directed the Government of NCT of Delhi to file report with regards to deaths that have taken place at hospitals nursing homes due to shortage of oxygen. The Affidavit in this regard shall be filed within 4 days."We direct the GNCTD to file a report, after making enquiries from all the hospitals and nursing homes, with regard to the deaths which have taken place...

The Delhi High Court on Tuesday directed the Government of NCT of Delhi to file report with regards to deaths that have taken place at hospitals nursing homes due to shortage of oxygen. The Affidavit in this regard shall be filed within 4 days.

"We direct the GNCTD to file a report, after making enquiries from all the hospitals and nursing homes, with regard to the deaths which have taken place in the said hospitals and nursing homes on account of shortage of oxygen. The particulars of all such deaths i.e. the name of the patient; the ward/ rooms in which they were admitted; the time of death and; the reason for death should be indicated in a tabular form. The affidavit in this regard by filed within 4 days." The Court ordered.

A division bench comprising of Justice Vipin Sanghi and Justice Rekha Palli was dealing with the plea concerning Covid 19 situation and shortage of medical oxygen supply in the national capital.

"We make it clear that in case any of oxygen refillers don't provide the data on the portal, strict action would be taken not just be delhi govt but also the court." The Court ordered.

Dealing with the aspect of providing details of the number of deaths, the Bench orally remarked:

"We will also have to compensate these people for dying due to lack of oxygen. Its the responsibility of the State." The Bench observed.

On Yesterday's Meeting Between Three Stakeholders

Senior Advocate Tushar Rao referring to the meeting ordered by the bench yesterday between the three stakeholders, apprised the Court that some cylinder vendors did not attend the meeting.

Suggesting that a system may be found where continuity is given to small hospitals, Rao submitted thus:

"Smaller hospitals are also lining up with individuals in cylinder filing places & they are crowding. If we can provide a continuity to these gas filing stations as the bigger hospitals."

Senior Advocate Maninder Singh appearing on behalf of Shanti Mukund Hospital apprised the Court that he had also attended the meeting.

At this point, Chief Secretary of the Delhi Government informed the Court that a marathon meeting was conducted between the stakeholders wherein it was discussed that supply of medical Oxygen is ensured so that such hospitals can focus on their medical duties also.

Submitting that an order as regards to the quota for allocation of oxygen will be placed before the Bench, it was also informed that there will be a dedicated number and that the existing contractual agreements shall be honoured.

At this point, Justice Vipin Sanghi observed that till the time the order is finalized, the supply of such medical oxygen should not stop.

Advocate Sacchin Puri appearing on behalf of Venkateswara Hospital submitted before the Court that the hospital is about to run out of oxygen and that the nodal officers have not been responding to them since the morning.

Taking note of the submission, the Bench remarked thus:

"This complaint is coming to everyone, then there must be some truth to it. There has been repeated complaints of calls and messages not being answered."

Arguing on the order issued by the Delhi Government dated 25th April stating that patients should be attended to immediately, Rahul Mehra appearing for GNCTD apprised the Bench that it was just an advisory.

At this point, the Bench remarked "That's what we have been saying. If there is negligent behaviour by any hospitals you pass orders. But passing these orders generally? This proceeds on assumption that without this order hospitals are not doing their job. You are unnecessarily putting pressure on hospitals who are already under pressure. There has to be some background to whenever an issue is passed."

Questioning the stand of GNCTD, the Bench went ahead to ask Mehra "You are not looking at the other side, the hospitals and workers. And have your own delhi govt hospitals been able to achieve this?"

On Supply of Medical Oxygen

On the inquiry of the Court as to whether there were only 6 oxygen suppliers in the national capital, Mehra apprised the Court that a system is being set up so a plan could be given to the hospitals in advance regarding supply.

During the course of hearing, Counsel appearing on behalf of Agrasen Hospital and Mahadurga Charitable Trust also highlighted the issue of shortage of medical oxygen faced by them due to which patients were not being given adequate covid treatment.

An assurance in view of this was given by Mehra suggesting that the GNCTD will come up with a workable order today to deal with the issue.

"We are going to come up with a workable order today. We need to understand the issue. Right now we are unable to understand who's giving what. We can only in a cooperative spirit." Mehra submitted.

On the submissions of one of the suppliers namely Seth Air that the Delhi Government does not have answer as to the distribution of oxygen supply, the Bench pulled up the the GNCTD by remaking thus:

"Again we are seeing you are only doing distribution of lollipops. This man is saying he has 20 tonnes but doesn't know who to distribute to! And you say you don't have oxygen."

At this point, Udit Rai appearing for the Delhi Government apprised the Court that the supplier's submission was completely false and that all the commitments made have been honoured by the Government.

At this juncture, Solicitor General Tushar Mehta apprised the Court that the Home Minister has agreed on the request made by the Delhi Government for providing assistance of aircrafts to be used for procuring tankers from Bangkok.

Expressing it's surprise that the Delhi Government vide order dated 22nd April failed to take into consideration all the gas refillers in Delhi, the Bench noted that although a substantial quantity is supplied to such gas refillers however no mechanism has been evolved to see that further supply is made by them to the hospitals.

Taking serious note of Seth Air's (one of the suppliers) submissions on its failure of supply oxygen to Maharaja Agrasen Hospital, the Bench opined that "we find this stand as completely false and unreasonable."

"It is evident that Mr Seth has been diverting that oxygen and possibly selling cylinders in black market. We direct GNCTD to take note and take over their unit. We direct Mr Seth to not cause any obstruction in running of plant under management of officers of GNCTD."

At this juncture, the Bench also went ahead to remark that "We want this unit to be taken over by tomorrow. Let this be an example for others."

Furthermore, the Bench also asked Mr. Seth to ensure that the hospitals get the supply of oxygen or he will be taken into custody.

The Bench also asked the GNCTD to file an affidavit in the Court tomorrow as to why, despite Seth Air being a big supplier in Delhi, was it not included by the order by the Delhi Government.

Pulling up the conduct of the Delhi Government, the Bench told Mehra that "Get your house in order. Enough is enough. If you can't do it, tell us, we will ask Central govt to take over. People are dying!"

Asking the GNCTD to pull up its socks on the aspect of distribution of liquid oxygen not only to larger Hospitals but also to smaller hospitals, the Court directed the Oxygen refillers to provide data on the government's portal.