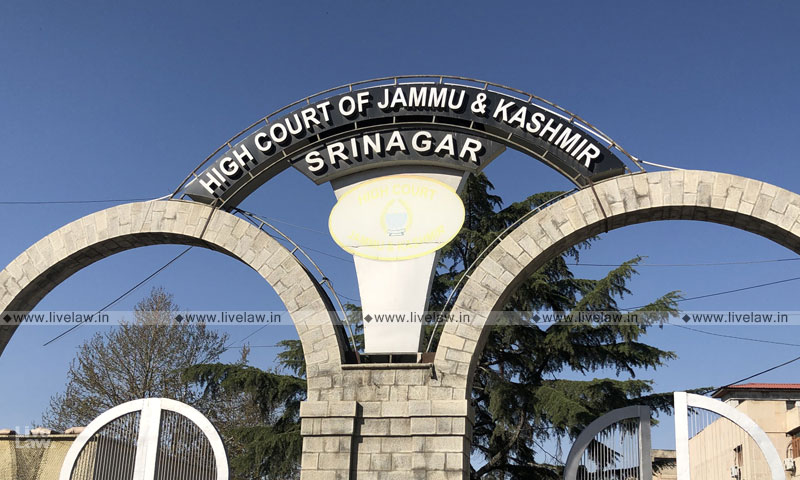 The Jammu & Kashmir and Ladakh High Court has held that the State cannot be permitted to acquire private lands without paying full compensation to affected people for a very long period of time. While coming down heavily upon the lackadaisical behaviour of the State, a Division Bench comprising Chief Justice Pankaj Mithal and Justice Sanjay Dhar observed, "It is an alarming...

The Jammu & Kashmir and Ladakh High Court has held that the State cannot be permitted to acquire private lands without paying full compensation to affected people for a very long period of time. While coming down heavily upon the lackadaisical behaviour of the State, a Division Bench comprising Chief Justice Pankaj Mithal and Justice Sanjay Dhar observed,

"It is an alarming situation that State is acquiring private land without payment of full compensation. This kind of action or omission on the part of the State authorities is not acceptable and cannot be allowed to continue for an indefinite period. We deprecate such practice and expect that the State would henceforth take all possible measures to ensure passing of an award within a reasonable time and payment of fair compensation to the persons interested where ever the land is acquired."

The petitioners were residents of village Kanli Bagh, Baramulla in the Union Territory of Jammu and Kashmir (erstwhile State of Jammu and Kashmir). They had invoked the writ jurisdiction of the Court for quashing the entire acquisition proceedings in respect of about 150 kanals and 03 marlas of the land which was notified for acquisition for the public purpose of establishing a Housing Colony at Sangri in Baramulla.

In respect of the said acquisition, a final declaration under Section 6 of the Land Acquisition Act ("the Act") was issued on 27.05.1978. The Collector, Housing and Urban Development Department, Srinagar prepared a draft award on 15.10.1982, in terms of which a tentative award was issued on 17.03.1998 directing for payment of compensation @ ₹ 5,000/- per kanal with 15% Jabrana (solatium). Further, a simple interest @ 4% was directed to be paid from July 1978 to July 1985/1995, for the period of possession but no final award was pronounced as is mandatory under Section 11 of the Act for completing the acquisition proceedings.

The petitioners had earlier approached the Court through a writ petition praying for a writ of mandamus to State for initiating acquisition proceedings afresh. In that case, no response was filed by the State. Therefore, the Court was constrained to decide the matter without having the version of the State. It directed the State to look into the grievances of the petitioners and to decide upon it, in accordance with law, within a period of two months. However, the State did not take any step as such.

The petitioners then instituted contempt proceedings. It was finally disposed of in view of the statement made by the counsel for the State that the consideration order would be passed on or before 09.02.2018. The consideration order was passed only on 15.03.2018. But again, no relief was granted to the petitioners. Hence, this petition was filed.

The Court held that the possession of the land was taken over by the respondents and consequently, the villagers were divested of the land which came to be vested in the State. In the normal course, in view of Section 11B of the Act, the land acquisition proceedings would have lapsed for want of final award within two years of the date of declaration. However, here the urgency provisions were invoked and the possession of the land had been taken over on account of which the land was vested in the State. The land vested in the State cannot be divested and therefore, the proceedings for acquisition attained finality and would not lapse and permit de-notification of the acquisition proceedings. Under such circumstances, the respondents are left with no option but to make a final award as mandated by Section 11 of the Act.

"…there is no dispute to the fact that the land stands acquired and that its possession has been taken over and handed over to the indenting department decades ago but till date final award has not been passed. The villagers as such have been deprived of the proper compensation of the acquired land which is clearly violative of the statutory provisions of the Land Acquisition Act and Article 300A of the Constitution of India. It rather amounts to denial of the basic human right to the villagers for almost about forty years."

The Court stressed that right to possess and occupy land/property used to be a fundamental right and is still continuing to be a constitutional right. It has been recognized even as a basic human right. In view of Article 300-A of the Constitution of India, no person can be deprived of his property otherwise by following the due process of law. Therefore, the non-payment of the compensation as provided under the statutes amounts to depriving the person of his right to the property.

The Court relied on Krishna Reddy v. Special Deputy Collector Land Acquisition, AIR 1988 SC 2123, wherein the Supreme Court while directing the statutory authorities to make the payment of compensation at the earliest observed that a person who has been uprooted may be facing starvation, therefore, the delayed payment may lose the charm and utility of compensation. Thus, the compensation must be determined and paid without loss of time.

Accordingly, the Court issued the writ of mandamus, giving three months to the respondents to decide upon the final award. It further held that the petitioners would be entitled to and paid compensation according to the final award along with all statutory benefits including the interest within a period of one month of the pronouncement of the final award after adjusting the amount which had already been paid to them under the tentative award. Additionally, it imposed exemplary costs of Rupees 10 lakhs on the respondents for dragging the petitioners in unnecessary litigation for decades and for depriving them of their property without adequately compensating them for such a long period.