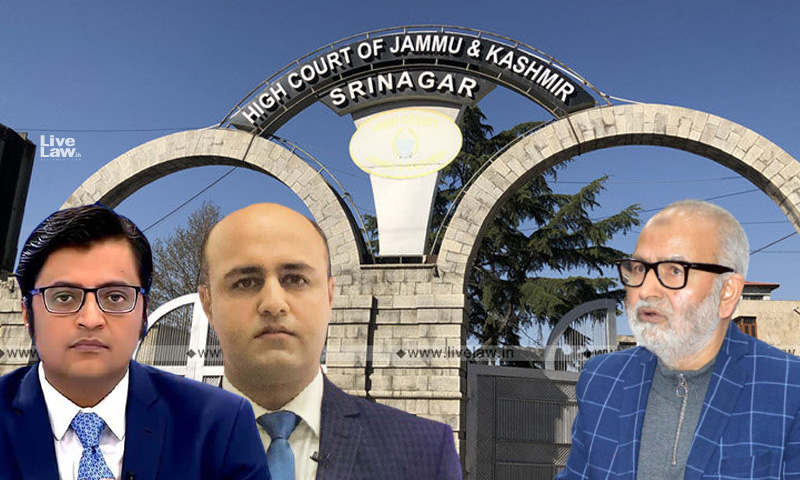 The Jammu & Kashmir And Ladakh High Court yesterday quashed a defamation complaint filed by the senior leader of Peoples Democratic Party (PDP), Naeem Akhter, against the Editor-in-Chief of Republic TV, Arnab Goswami, and journalist Aditya Raj Kaul.Stressing that the press has a bounden duty to bring to the notice of the viewers and readers the day-to-day events, particularly those...

Stressing that the press has a bounden duty to bring to the notice of the viewers and readers the day-to-day events, particularly those relating to public figures and public servants concerning their actions/omissions affecting the public at large, the Bench of Justice Sanjay Dhar observed thus:

"...when a journalist publishes accurate and true report in respect of a public figure relating to his public functions, which is already in public domain, it cannot be stated that there was any intention to harm the reputation of such person."

"...question that arises for consideration is as  to whether reporting of allegations levelled by a senior office bearer of a Public Sector Corporation against a Minister touching the public duties of the said Minister would amount to offence of defamation. The answer to this question has to be in negative. This is so because categorizing as defamation, the publication of allegations/charges concerning public duties of public figure recorded in a letter which is in public domain, would be an unreasonable restriction on the freedom of press guaranteed under Article 19(1)(a) of the Constitution".

The Case in brief

The 2018 complaint filed by Akhter, a former J&K Legislative Assembly member, had alleged that on July 4, 2018, Republic TV had broadcast a defamatory and malicious news segment against the Akhter following a letter dated June 21, 2018, written by one Khalid Jahangir, member of Bhartiya Janta Party to the Governor.

Essentially, Khalid Jahangir had leveled allegations of corruption and favoritism against a close aide of the former Chief Minister of the State.

According to the complainant, even though the letter did not make a mention of the name of any person, yet Arnab Goswami, while reporting about the said letter, deliberately and intentionally mentioned the name of Akhter in connection with the allegations leveled in the letter.

It was further alleged that the anchors of the programme i.e., including Aditya Raj Kaul, repeatedly and intentionally, kept on mentioning Akhter's name in connection with the allegations made in the letter.

Therefore, alleging that the news segment in question was defamatory and had been made with a mala fide intention to cause irreparable damage to the reputation of the complainant, Akhter filed a defamation complaint u/s 499 and 500 RPC before the court of Chief Judicial Magistrate, Srinagar

Thereafter, the court took cognizance and initiated the process against petitioners, and also issued bailable warrants for securing their attendance.

Challenging the complaint as well as the proceedings emanating therefrom, the petitioners moved the High Court on the grounds that the allegations of corruption against the complainant were not made by the petitioners but these were made by Mr. Khalid Jahangir in his letter addressed to the Governor.

The petitioners further contended that the broadcast was concerning the conduct of a public servant in discharge of his public duties and the same was aired in good faith for public good.

It is also contended that the broadcast reported fairly the contents of the letter which contained serious allegations of corruption in relation to the working of the JKPCC and the manner in which contracts/works were awarded to third parties.

In light of this, it was submitted that the complaint made by the complainant before the trial Magistrate against them together with the material in support thereof, did not disclose the commission of any offence by the petitioners

Importantly, noting that the Supreme Court has time and again emphasized the importance of freedom of the press in its various judgments, the Court opined thus:

"...we have to balance the hand the freedom of press which is encompassed in the fundamental right to freedom of speech and expression guaranteed under Article 19(1)(a) of the Constitution, which is subject to certain restrictions including the one relating to defamation."

Against this backdrop, referring to the letter in question containing allegations of corruption and favouritism, the Court said that the Works Minister, referred to in the letter, was none other than the complainant (Naeem Akhter), who was holding the portfolio of Works Minister in the coalition Government of People's Democratic Party and Bhartiya Janta Party during the period when the letter was written.

"The reporting of contents of letter written by Shri Khalid Jahangir touching the official functioning of the department that was under the Ministry headed by the complainant, would not amount to offence of defamation," the Court further held.

Importantly, underscoring that the channel had, while telecasting the programme, taken due care that is expected of a responsible news channel, the Court remarked thus:

"The anchors and presenters only repeatedly referred to the letter of Shri Khalid Jahangir and read out contents thereof. In fact, upon watching the programme on the compact disk, it appears that the news anchors were at pains to emphasize the fact that their source of information is the letter in question and they go on repeatedly telling the viewers about the charges/allegations with each caption carrying question mark(?) at its end, thereby conveying to the viewers that the allegations/charges contained in the letter are yet to be established."

In this view of the matter, the court ruled that it cannot be stated that the accused intended to harm the reputation of the complainant.

The Court also took into account the fact that the letter was already reported by the media, and therefore, the Court was of the opinion that it was a case, where petitioners, in their capacity of anchors and reporters of news channels, had disseminated, whatever was already in the public domain in the form of a letter of Khalid Jahangir

"Categorizing as defamation, the publication of allegations/ charges concerning public duties of public figure recorded in a letter which is in public domain, would be an unreasonable restriction on the freedom of press guaranteed under Article 19(1)(a) of the Constitution," the Court further ruled.

Lastly, noting that no offence is disclosed against the petitioners from the contents of the complaint and the material, the petition was allowed and the complaint titled "Naeem Akhter v. Arnab Goswami & others" pending before the Court of Chief Judicial Magistrate, Srinagar, and the proceedings emanating therefrom were quashed.