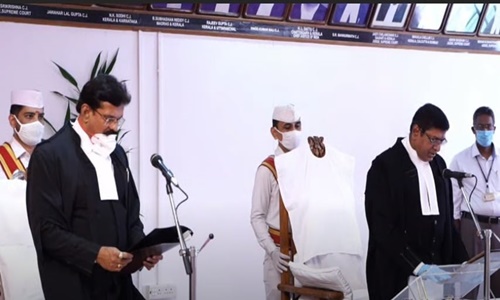 The swearing in ceremony took place at Banquet Hall in the High Court at 9.30 am today and the same was streamed live. The Chief Justice S. Manikumar administered the oath to the judge. In the light of Covid-19 pandemic and the Government guidelines, the participants were limited to the minimum.

Justice Badar joined the Maharashtra Judicial Service and was recruited as a District Judge in November, 2000. He worked as an Additional District & Sessions Judge at Akola and Wardha; Member, Industrial Tribunal at Nagpur and Principal District and Sessions Judge at Pune. He also worked in the Registry of Bombay High Court as Registrar (Vigilance). He was elevated as an Additional Judge of the Bombay High Court on March 3, 2014 and was made permanent in March, 2016.