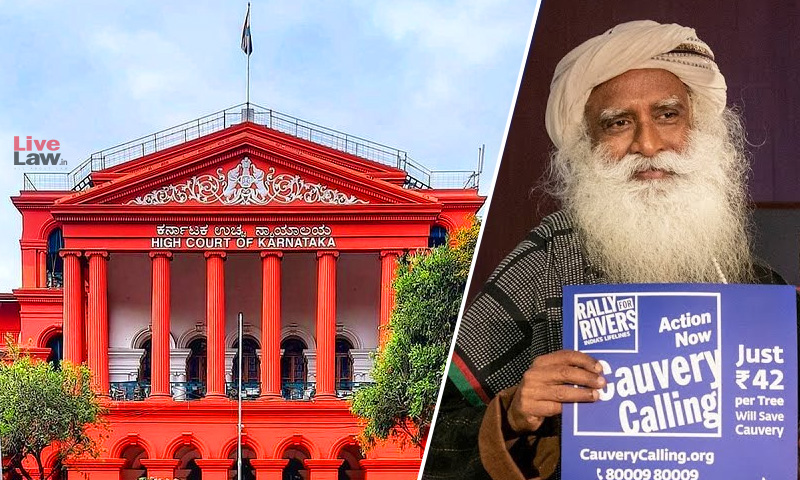 x
The Court said that the efforts of Isha Outreach Foundation in afforestation must be appreciated.

The Karnataka High Court on Tuesday dismissed a writ petition which sought directions to restrain Sadhguru Jaggi Vasudev's Isha Outreach Foundation from collecting public funds for the"Cauvery Calling Project", which involves planting of tree saplings along the Cauvery river bed. Observing that the court is of the "considered opinion that afforestation has become very necessary keeping...

The Karnataka High Court on Tuesday dismissed a writ petition which sought directions to restrain Sadhguru Jaggi Vasudev's Isha Outreach Foundation from collecting public funds for the"Cauvery Calling Project", which involves planting of tree saplings along the Cauvery river bed.
Observing that the court is of the "considered opinion that afforestation has become very necessary keeping in view the present scenario and such activities need appreciation rather than putting spokes in carrying out projects like Cauvery calling", the Court  dismissed the PIL filed by advocate A V Amarnathan,which was later taken up as a suo-motu petition, seeking directions to the Isha Outreach foundation to not collect funds from the public for the Cauvery Calling project.

A division bench of Acting Chief Justice Satish Chandra Sharma and Justice Sachin Shankar Magadum, while holding that the petition was a frivolous petition and deserved to be dismissed, said "

The court also noted that much has been argued on the point of planting trees on government land. During the course of the arguments, the Court has asked a pin pointed question to the learned government advocate to bring to the notice of this court any statutory provision of law which restrains individual citizens of India, from planting trees on government land. However, no such law has been brought to the notice of this court by the state government.

Further, the bench observed, "In the present case, a categorical statement has been made by the state government that the project Cauvery calling is not their project, planting of sapling is not being done on government land or public land. Hence the question of interference by this court in a 'noble project' like Cauvery Calling, does not arise."

The court also referring to a Supreme Court order in which it dealt with the necessity of forest and the disaster which has taken place due to loss of forest cover, said, "Therefore the only remedy available to save mankind and planet earth is afforestation, which is being done by Respondent 3. The efforts by the respondent 3, certainly requires appreciation."

The High Court had on September 2, reserved its judgement on the petition. Senior Advocate Uday Holla appearing for respondent Isha Outreach had submitted that, "Honestly, when trees are being planted and when forest cover has come down in India by almost 40 percent, any plantation should be welcomed. However, in this case it was the other way round. The respondent (Isha outreach) is not only doing plantation drives in Karnataka but also in Tamil Nadu."

Further, he submitted that one of the grounds raised in the petition was that we are collecting money for carrying out the plantation and mobilising farmers to participate from the public. Holla said, "That cannot be found fault with, because we are a public charitable trust and we have to declare our accounts every year."

Amicus Curiae Advocate B V Vidyulatha firstly apprised the court about a special leave petition filed before the Supreme Court by Isha outreach challenging the order of the high court taking the matter to suo-motu. She sought permission to make arguments in view of the pending petition. The court allowed her to proceed.

She had submitted that the court was concerned about two aspects: the afforestation being undertaken on government land and forest land, and also money being raised from the public by the foundation. She said that Rs 42/ tree is being demanded and the foundation plans to plant around 253 crores tree saplings across the 639 kilometer stretch of Cauvery river bank from its birthplace Talacauvery to Thiruvarur. That means, it is collecting a sum of Rs 253 X 42 in total of Rs 10,626 crores. That is why the court looked into the matter.

A reference was also made to the claim that the Cauvery calling project is seeking to plant trees in forest land and no permission has been taken for it. When the financial burden is being borne by the state government, and the foundation is simultaneously raising the amount from the public, then what happens to the money collected from the public was one of the questions she posed.

To which the bench had said, "If I say my expenses will be borne by the government, does it mean anything unless there is an order of the government?"

Holla informed the court about the awards and accolades received by the foundation for the work undertaken by it. He submitted, "The Cauvery calling project is managed and executed by respondent 3. It is our project as the government did not accept it, we said we will do it on our own. Everything is accounted for, it is a public charitable trust, we have to file returns every year. If there is a difference they will not continue my exemption." He added "To say that there is some cheating is wrong. We are a public charitable trust and we have a reputation. We have received innumerable accolades and awards. If we would have been there to cheat we would have not received it."

The state government had also clarified to the court that the Cauvery calling was not its project. The court again queried with the counsels- "suppose it is forest land and I am planting a teak or sandalwood tree then, will it amount to an offence?" The amicus replied that there was no bar in any act to her knowledge.

In response the bench orally observed, "We should promote these activities." Justice Chandra even recalled that "We are having a big mango tree in our house in Jabalpur. We wanted to expand the house, so we changed the design, instead of felling the tree. My son now says we are getting so many mangoes that we do not need to buy from the market."

Last year, the Court had converted the PIL as a suo moto case after removing the petitioner as a party. The Court took this action after rebuking the petitioner for serving a legal notice on the Discovery Channel against the telecast of a program on 'Cauvery Calling' by misrepresenting that there was a stay on such a telecast.

Case Title: A V Amarnathan And State Of Karnataka