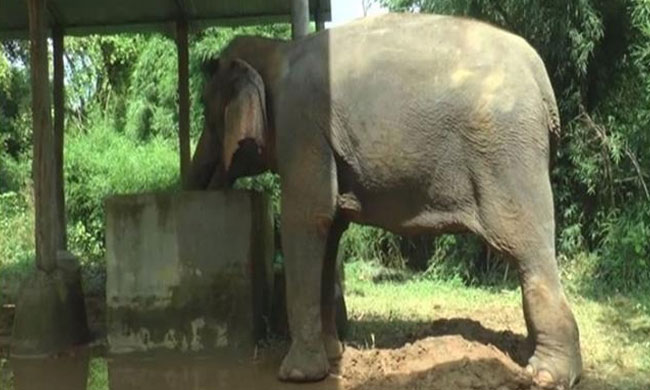 The Karnataka High Court has held that Section 40 of the Wild Life (Protection) Act, 1972 permits private ownership of live elephants and there is no bar in giving them up in adoption, so long as the transaction is of non-commercial nature.

The observation was made while dismissing a PIL against adoption of four elephants by Gujarat based Radha Krishna Temple Elephant Welfare Trust (Respondent no. 3), from State of Karnataka. A division bench of Chief Justice Ritu Raj Awasthi and Justice Ashok S Kinagi held,

"The Respondent No.3 is a public trust of which according to us the Elephants are beneficiaries. The relationship between them is of trustee and beneficiary. In view of what we have held above, we do not see the need of formal documentation for a privately owned Elephant, especially which is in need of rescue or adoption."

It added, "We are satisfied that the Respondent No.3 is a bonafide Trust which is carrying out a laudable object...We do not see the need for a formal documentation for a privately owned Elephant, especially one which is in need of rescue or adoption. In fact, the law does not require any documentation. According to us, any document with any nomenclature is sufficient as long as it shows consent and absence of commercial transaction."

It further said, "We see no reason whatsoever as to why the 153 Elephants, which we would like to refer as adoptee Elephants, in custody and care of Respondent No.3 should be disturbed by anyone especially since they are getting good care, good facilities and seem integrated and well adjusted."

The petitioner, citing news reports, had questioned the transfer of elephants. A direction was sought to the State Government to issue guidelines directing that no person can sell or transfer or translocate Elephants from the State of Karnataka to the trust.

Advocate Ramesh T, argued that elephants cannot be entrusted with private individuals or organisations and must be reclaimed by the State Government, which has the duty to maintain them.

Advocate Dr Sujay N Kantawala appearing for the trust submitted that the objects for which the Trust is formed is to promote welfare of animals, and that it has received a formal permission from the Principal Chief Conservator of Forest (Wildlife) and Chief Wildlife Warden, Gujarat on 9th July 2020 for the Elephant Care Camp at Jamnagar.

The bench referring to Wild Life (Protection) Act, 1972, the Indian Elephant – Elephas Maximus stands at Sr. No.12B of Schedule I of the said Act, said, "While no person other than one having a certificate of ownership can acquire, receive or keep any animal from Schedule I in his possession as per Section 40(2A), the proviso in the Section carves out an exception in case of live Elephants. This permits private individuals to have ownership over live Elephants. Next Section 43 states that no person having in his possession any captive animal shall transfer the animal by way of sale or transaction of a commercial nature."

"In such cases where the Elephants are or were privately owned, the question of involvement of Forest Authorities is minimal and limited only to the extent of granting a transfer permit in accordance with Rule 125-e of the Central Motor Vehicle Rules. We therefore find nothing wrong with the relocation of the Elephants to Respondent No.3."

"We also do not see anything wrong in other instances of transfers of private Elephants which are loosely stated in the Petition. In fact the only aspect relevant for relocation of an Elephant which is privately owned is the consent of the person in whose possession the Elephant is, such consent having been given without any element of commercial transaction. Once such consent is given it is incumbent on authorities to grant transfer permits in accordance with law."

The court also rejected the contention of petitioner about preference being given to Respondent No.3 Trust and its capability. It said, "We find that the said allegation is without any data or basis."

Finally the court issued following directions to the trust:

(i) The Elephants that are in the custody and care of the Respondent No.3 Trust, shall till the end of their respective lives, be continued to be given the same care and facilities as specified in the Counter filed in these proceedings.

(ii) In case any more Elephants are relocated to the Respondent No.3's facility by private individuals, organisations, Central or any State Governments or their departments and agencies, the same care and facilities as specified in the Counter filed in these proceedings shall be provided to them for the rest of their respective lives.

(iii) The Respondent No.3 shall not enter into any commercial transaction referred to in Section 43 of the Wild Life (Protection) Act, 1972.

(iv) The Respondent No.3 shall before receiving any further Elephants, ensure that the same infrastructure as present is available and sufficient for the new adoptee Elephants.

(v) The Respondent No.3 shall not use its facilities for any commercial purpose.

(vii) The Respondent No.3 shall submit an annual report of its activities and facilities for the Elephants under its care to the local forest authorities in whose jurisdiction they are situated.