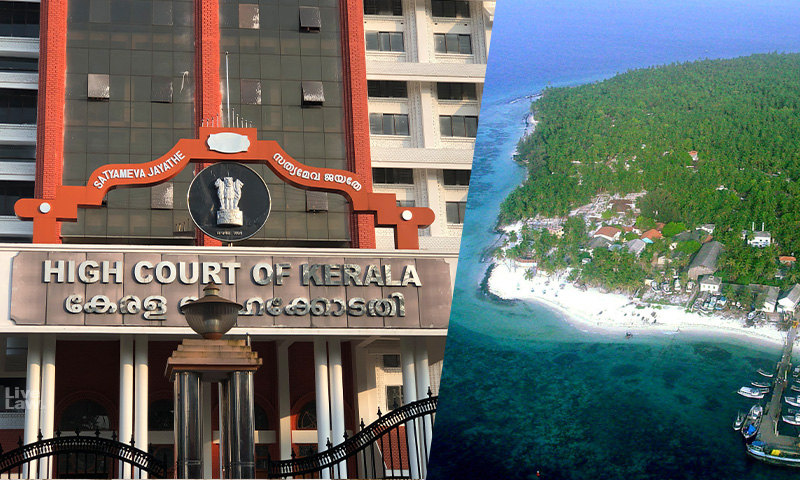 The Lakshadweep Administration has filed a counter affidavit before the Kerala High Court in a plea primarily seeking that the UT's draft regulations be published in vernacular languages.The Senior Standing Counsel S. Manu on behalf of the Administration has submitted that the said writ petition is not maintainable and hence liable to be rejected, citing several reasons for...

The Lakshadweep Administration has filed a counter affidavit before the Kerala High Court in a plea primarily seeking that the UT's draft regulations be published in vernacular languages.

The Senior Standing Counsel S. Manu on behalf of the Administration has submitted that the said writ petition is not maintainable and hence liable to be rejected, citing several reasons for the same. It has also been contended that English is taught in all schools on the islands and such, the petition has no merits either.

The main contention in the counter affidavit was that judgments in PILs operate as judgments in rem. The Administration has listed down a number of recent writ petitions challenging the implementation of its draft regulations where the Court had rejected to interfere with the matter. In fact, challenge against the draft regulations has been unequivocally held as premature by the Court, the Administration argued.

It was also argued that the doctrine of res judicata would be applicable in the matter. On these ground, they have accused the petitioners of having abused the process of the court since the petitioners were already aware of these decisions.

Additionally, it is also submitted that all the draft regulations produced in the writ petition have already been forwarded to the Ministry of Home Affairs, Government of India by the Lakshadweep Administration after the consultation process.

Hence, the respondent alleged that the petitioners have approached the Court much after the draft regulations were forwarded with the comments received during the consultation process to the Ministry without stating any reasons for the delay in this regard. They are actually seeking a reversal of the steps already completed, the counter read.

Coming to the merits of the petition, it was alleged that there is no legal requirement of any pre-legislative consultation in framing regulation under Article 240 of the Constitution, since the requirements of principles of natural justice have no application in legislative process. Yet the Administration purportedly followed a consultation process in the case of the draft regulations, after which they were forwarded to the Ministry.

Additionally, the counter submitted that the contentions of the petitioners that the drafts ought to have been published in vernacular is without any merits for the reason that there is no such requirement in law. As a matter of fact, the petitioners themselves did not point out anything having the force of law to support this contention.

The Administration relied on Art. 348 (1)(b)(ii) of the Constitution to establish that the authoritative text of all orders, rules, regulations and bye laws issued shall be in the English language. Moreover, it has been argued that Malayalam has not been adopted as the official language of Lakshadweep under Art. 345.

In fact, the language mainly spoken by the people of Lakshadweep except in Minicoy Island is Jeseri, which has no script. Furthermore, English is taught in all schools on the islands.

The allegation that sufficient time was not granted to submit objections and suggestions with regard to the regulations was alleged to be incorrect and hence denied. The very fact that several comments/suggestions were received within the time provided shows that those who were diligent in the matter had enough time and opportunity to submit the objections.

Apart from the above contentions, the Administration also pointed out that the challenge in this writ petition is against the legislative process and therefore no interference by the Court is warranted. Similarly, Administration did not address the aspects of purpose, objectives and necessity of the regulations in its counter affidavit as it is premature to justify the same at this point of time.

The petitioner Lakshadweep MP P.P Mohammed Faizal had submitted that it was vital that the recently proposed draft regulations be made available in the vernacular language for the benefit of the indigenous stakeholders for the reason that Lakshadweep has no legislature. This was cited to be of immense significance to ensure public participation in the law-making process.

Chief Justice S Manikumar and Justice Shaji P Chaly while admitting the PIL last month had directed the Centre and Lakshadweep Administration to file their response within two weeks.

Advocate P Deepak had appeared on behalf of the petitioner in June and added that the regulations proposed by the new administration are likely to have far-reaching consequences on the life, liberty, and way of living of the residents. The PIL hence urged that these vernacular versions be made available through both print and electronic media, accompanied by a concise justification and essential elements of the proposed regulations.

The broader financial implications and the probable impact of such legislation on the environment, fundamental rights, lives, and livelihoods of the indigenous population of the Union Territory were also sought to be disclosed in such drafts.

Several documents were attached with the petition which included the public notices of the draft regulations issued since January 2021. According to the petitioner, these notices were issued to gather public opinion in the proposed Regulations. However, it was alleged that this wasn't sufficient to effectively receive a public opinion for four reasons.

1. Not published in the vernacular language

The petition also pointed out that since some of the draft regulations have an impact on the environment, specific reports should be obtained from the National Centre for Earth Science Studies and the National Centre for Sustainable Coastal Management  with respect to the viability/impact of the proposed regulations vis-à-vis the Integrated Island Management Plans approved for the 10 inhabited islands

"All developmental activities in the archipelago are to be undertaken strictly in consonance with the provisions contained in the Integrated Island Management Plans and in consultation with the elected local self-government bodies," the plea said.

The petitioner, therefore, urged the court to direct the respondents inter alia to place the vernacular versions of draft notifications in the public domain, together with a brief justification of the proposed regulations.