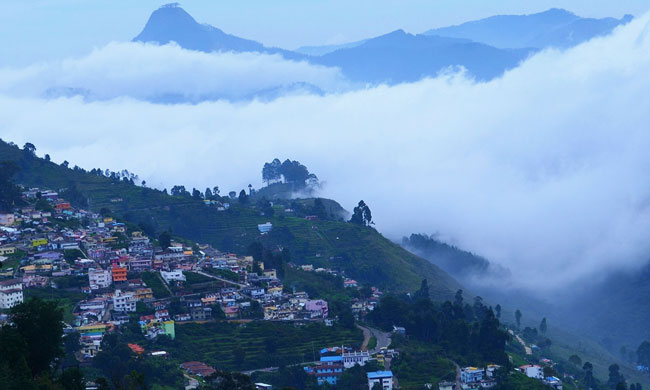 Observing that Kodaikanal has already become a concrete jungle, the Madras High Court on Monday passed omnibus directions for conserving the ecology of the famous hill station in Western Ghats.

The division bench of Madras High Court, Madurai Bench, took judicial note of the fact that Kodiakanal has already been polluted and damaged enough, and directed the District Collector, Dindigul to submit a report to the Registry of Court certifying that no unauthorized construction had come up and no polluting activity had taken place in Kodaikanal, once in every six months.

Further the court ordered that "Such a report shall be published in the website of the Tamil Nadu Government and it will be open to any public spirited citizen to initiate contempt proceedings if the said report filed by the District Collector, Dindigul turns out to be incorrect."

The court went on to suggest that if need be, tourist motor vehicles may be stopped at the foothills of Kodaikanal and they be asked to use solar /electric public transport systems, in order to remedy the degenerating air quality and traffic congestion in the region.

The bench also directed that "the solid waste generated by the inhabitants and the hotel industry cannot be dumped in Kodaikanal. The cost of disposal and transportation will have to be borne only by the waste generator. In other words, pollution of every kind will have to be put an end to. The violators will have to be dealt with an iron hand. If a new construction is illegally coming up, action should be taken and the deviation should be nipped in the bud. Whenever an application for putting up a construction is submitted, it must be vetted with utmost care and the process of scrutiny will have to be strict. The authorities at the regulatory, supervisory and field level will have to ensure that every norm laid down in the laws relating to planning and environment are scrupulously adhered to. Time has come to fix personal liability on the officials and make them accountable."

The Act provides for planning, development and use of rural and urban land in the State of Tamil Nadu and for purposes connected therewith. As per Section 32 of the Act, the Master Plan for Kodaikanal should be updated once in every five years, the petitioner submitted.

The Madras High Court had on previous occasions directed the municipality of Kodaikanal to take prompt and strict actions against unauthorized constructions in the region. Pursuant to that, the Kodaikanal Municipality and TANGEDCO had locked and sealed a number of buildings.

Aggrieved by the same, the Association moved the court contending that for sustainable development in Kodaikanal, ecology must be balanced with development and tourist inflow. They contended that the government was, in view of the aforementioned provision, bound to revise and review the Master Plan for Kodaikanal every five years.

"When a power has been conferred on the authority, there arises a duty to exercise the same", it was argued.

The Master Plan was alleged to be last updated in the year 1998. Thus, the question that arose before the court was whether the Master Plan for Kodaikanal was to be mandatorily revised periodically in accordance with Section 32 of the Act.

The bench did not find merit in the petitioner's argument that to meet the demands of urbanization and the tourist industry, the Master Plan was to be periodically modified and revised by the government. The power conferred on the Government under Section 32 of the Act cannot be so applied as to destroy the ecosystem of Kodaikanal, by making it mandatory, the court held.

"We are of the view that a mechanical and routine approach cannot be adopted in this case. As already pointed out, the statute provides for planning, development and use of rural and urban lands in the State of Tamil Nadu. But, Kodaikanal is not one more piece of rural or urban land. It is a unique eco-system by itself. Therefore, the imperatives will have to be altogether different. The Government has to plan for the preservation of the unique natural heritage of Kodaikanal."

"We can take judicial notice of the fact that Kodaikanal has already been polluted and damaged enough. We must preserve atleast what is left. That is why we cannot countenance the contention that to meet the demands of urbanisation and the tourist industry, the Master Plan will have to periodically modified and revised.", the bench observed.

The bench further relied on various precedents, including the verdict of High Court of Uttarkhand in WP No.126 of 2014, which granted person hood rights to the Ganga river basin and accordingly held that "there is thus a movement toward the recognition of nature as a rights-holder, a change from a prevailing stance that protects nature by way of human interest".

The order was pronounced by Justice Swaminathan today at 2 pm in his chambers while Justice Kirubakaran was in Chennai.