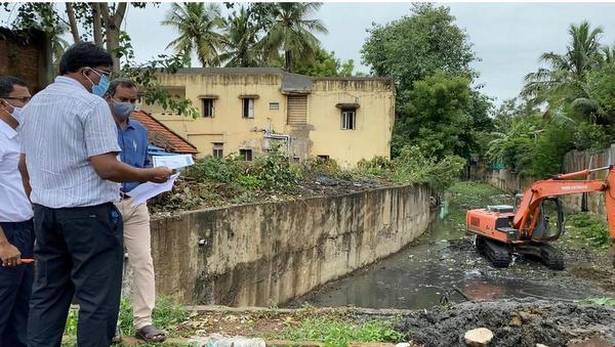 Issuing a slew of directions on top of the directions already in force, the Madras High Court has underscored that there will be no leniency towards waterbody encroachers and land grabbers. The court has made it clear in a batch of writ petitions seeking directions to prevent widespread encroachment that- it won't allow the encroachers to peacefully enjoy the properties listed as water bodies...

Issuing a slew of directions on top of the directions already in force, the Madras High Court has underscored that there will be no leniency towards waterbody encroachers and land grabbers.

The court has made it clear in a batch of writ petitions seeking directions to prevent widespread encroachment that- it won't allow the encroachers to peacefully enjoy the properties listed as water bodies on the 'Tamil Nilam' Website.

The first bench of Acting Chief Justice Munishwar Nath Bhandari and Justice PD Audikesavalu has directed that no registering authority under the Registration Act, 1908,  shall register any document pertaining to lands classified as water bodies in the revenue records as shown in the Tamil Nilam Website.

Additionally, the court made the following directions:

1) The registering authority must obtain a declaration from every such applicant seeking land registration, plan approval, electricity/ water connection or assessment of property tax that their lands are not situated in waterbodies.

2) Moreover, the authority allowing the requests in such applications should ensure that the property has not been identified as a waterbody by the State Government in Tamil Nilam Website. To ascertain the status of the land concerned, physical inspection at the property must also be carried out for ensuring the same and an office note about the same must be kept on record.

3) The court has also given an ultimatum to aiding/ abetting officials who circumvent law to facilitate encroachment of water bodies. The court, therefore, noted in the common order as given below:

"Any public authority, official or other staff concerned, who is found to have granted or aided or abetted in granting approval for lay-out or building construction or assessment of property tax or electricity or water connection for a property located on water body, or commits dereliction of duty by not protecting a water body from encroachment, shall be liable for disciplinary action under the relevant rules governing their employment, and prosecution for offences relating to encroachment under Criminal Law."

The court has asked the Chief Secretary to file a report of compliance before the Registrar (Judicial) of High Court by 31st April. The court has also asked the authorities to regularly desilt the waterbodies, arrange periodical cleanliness drives, install CCTV Cameras and put up fencing for prevention of waterbodies' encroachment, along with the appointment of security guards wherever possible.

"Though the Division Bench of this Court in Anti Corruption Movement -vs- Government of Tamil Nadu (Order dated 04.10.2007 in W.P. Nos. 25776 of 2006 and 17915 of 1993) had issued specific directions to demarcate the boundaries of the water bodies and remove the encroachments in the entire State and the said directions have been reiterated by the Full Bench of this Court in T.K.Shanmugam -vs- State of Tamil Nadu [(2015) 5 LW 397], the same has not been completed. In such circumstances, it would not be proper for this Court to grant any further extension of time in that regard and it has become imperative that the aforesaid exercise has to be taken up without brooking any more delay..."

Stating the above reasons, the court ordered that demarcation of the boundaries of all water bodies as listed in the Tamil Nilam Website must be carried out immediately. After the completion of this first step, the court has given a strict mandate to the authorities for immediate removal of encroachments found, after giving due notice under Tamil Nadu Protection of Tanks and Eviction of Encroachment Act, 2007, or the Tamil Nadu Land Encroachment Act, 1905, as the case may be.

The directions given by the High Court in 2019 includes an Action Taken Report by the Chief Secretary about the removal of encroachments as well as Collectors preparing a list of water bodies across the state as given in revenue records and sending the copies of the said list to Registration Department, TANGEDCO and local bodies.

The directions in 2019 also instructed that no electricity/ water connection should be given to sny building situated in a water body and the concerned departments issuing circulars to that effect.  Additionally, the court also asked the local bodies not to give approval for construction or assess the building for taxation when it is known that the building is located in a water body notified by the Government.

The court direction that no person whose residence is in a land notified as a water body in the revenue records shall not be included in the Voter's List was revoked by the High Court later. Yesterday, the first bench also agreed on removing that direction alone for the purpose of public interest litigations that came up before it.

It is pertinent to note here that the Chief Secretary submitted a status report to comply with the first direction in the 2019 order in substance. However, it must be noted that this was done much later, i.e. on 14th December, 2021, when the present petitions were being heard by the first bench. According to the 2019 order, Chief Secretary was supposed to submit the list by 11th February, 2019.

Additionally, the State also mentioned that the Land Register will get integrated with the 'Tamil Nilam' website to form a more efficient Government Land Management System. The status report also included the Government's plans for a DGPS (Differential Global Positioning System) based survey of all water bodies, training and hiring of licenses surveyors that were completed, taking survey refresher courses for Village Administrative officers and equipping them with the skillset for accurately carrying out the survey of water bodies along with the already hired surveyors.

Therefore, the court iterated the important excerpts of the status report filed by the Chief Secretary in the order:

"It is explained that in order to display the water bodies in their respective exact real-world positions with 'centimetre-accuracy', a survey of all water bodies using Global Positioning System (GPS) or drones has to be conducted and their geo-referenced shapes have to be published online and overlaid (superimposed) on real-time Google Maps/Google Earth or on maps of NRSC so that their exact status, i.e., whether they are encroached or not could be exactly ascertained by the public. If the boundaries of villages are also surveyed using DGPS, the boundary of each village can be displayed online within which the water bodies concerned can be displayed at their real-world positions.

The court also took note of the submission that large scale manpower in terms of licensed surveyors would be required for the completion of the process, along with sanction of more funds to complete the demarcation of boundaries of the enormous number of water bodies across the State. The status report also mentions the measures that would have the efficacy to overcome such obstacles.

"...Cadastral Survey using Differential Global Positioning System (DGPS) and Electronic Total Stations is currently under progress in Krishnagiri, Kanniyakumari and the Nilgiris Districts. Geo-referenced Village Maps of these 3 Districts will be published online on the website of the Department of the Survey and Settlement as soon as the DGPS survey of each Taluk is completed and the maps are validated", the status report of 14th December had stated.

The court also added that the competent authority has the power to independently classify a piece of land not included in the current list of water bodies if there is sufficient proof to that effect.

In another batch of writ petitions, during the course of proceedings on 8th December, the court had directed the personal appearance of the Chief Secretary while hearing a batch of writ petitions challenging illegal encroachment of water bodies, including a suo moto petition registered pursuant to the apex court directions and connected matters.

When the court ordered the personal appearance of the Chief Secretary and directed the compilation of a list of water bodies within the next one week, it had also recalled the directions issued back in January 2019 as a first step in dealing with illegal encroachments.

Later, the court had dispensed with the personal appearance of Tamil Nadu Chief Secretary V Irai Anbu upon the intimation that the list of water bodies has been published in Tamil Nilam Website detailing their survey numbers, location and area, pursuant to the 2019 order. On16th December, the court completed hearing the arguments and the judgement was reserved.