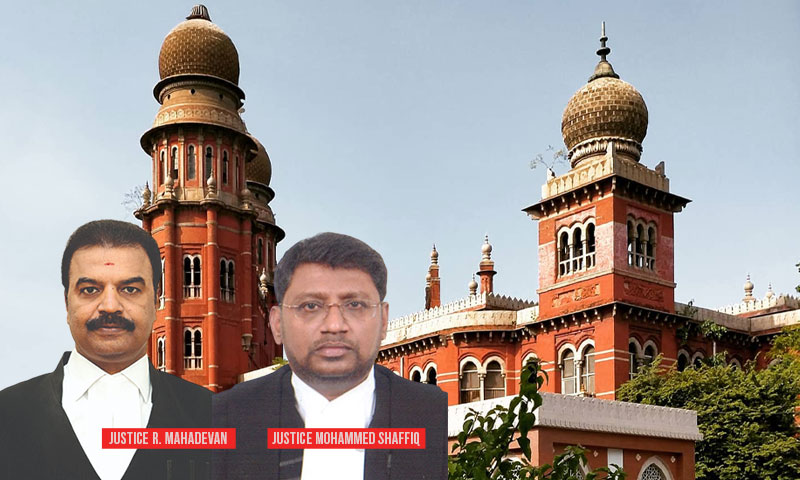 The Madras High Court recently upheld the validity of amendments made to Section 6 of The Tamil Nadu Value Added Tax Act, 2006. The court observed that in matters relating to tax, the interest of the State must be considered as against the interest of certain individuals. The court also discussed the power of the legislature in taking decisions with respect to tax

Justice R Mahadevan and Justice Mohammed Shaffiq also held that the assessment orders made under the Act could not be challenged in the writ petitions and should be challenged through the remedy of appeal under Section 51 of the Tamil Nadu Value Added Tax act 2006.

The petitioners in these batches of writ petitions are engaged in works contract. Earlier, The Tamil Nadu General Sales Tax Act, 1959 and the Tamil Nadu Value Added Tax Act, 2006 gave benefits to the dealers in works contract. Under Section 5 of the 2006 Act, A dealer is liable to pay tax for each year on his taxable turnover relating to his business of transfer of properties and goods involved in the works contract, either in the same form or in some other form, which may be arrived at in such a manner as specified under the first schedule of the Act.

With the amendment introduced by Act 21 of 2007 to Section 6 of the Tamil Nadu Value Added Tax Act, 2006, discrimination was created between the dealers who purchase goods within the State and outside the State/country. The retrospective operation of the act was also challenged as being arbitrary, beyond legislative competence, resulting in hostile discrimination within the works contractors.

Contention of the Petitioner

The petitioner contended that fiscal legislation can be subjected to challenge if there is no rational distinction between the two classes. In the present case, there is no justification for the classification made by virtue of the impugned amendment. It was argued that the amendment discriminates between the co-developers, who use goods purchased locally and purchase goods from dealers outside the state, which limits the dealers to purchase goods from within the State. Subsequently, this violates the rights guaranteed under Part XIII of the Constitution.

The petitioners argued that the impugned amendment violated Article 304 (a) of the Constitution which mandates the States to levy tax on goods having its origin outside the State at the same rates as local goods and prohibits the States from levying taxes at different rates on the basis of its origin.

Contention of the Respondent

The respondent submitted that the intention behind bringing in the amendment was to mitigate the loss of revenue and to promote the growth of intra-state purchases and manufacturing. Therefore, such legislation giving effect to economic and fiscal policy dealing with financial aspects requires no judicial interference by this Court.

The respondents argued that certain contractors were evading the payment of tax by resorting to purchase goods for execution of works only from dealers outside the State or by import from outside the country and use the goods in the execution of the works. In this fashion, the contractors were benefited, saving the tax legitimately payable by them on the purchase of goods.

Thus, they contended that the amendments were brought out to impose certain restriction on certain categories of dealers who were wrongfully enjoying the benefits of the legislation, which were not intended to be provided to them.

Further, it was argued that even if the classification was irrational, the taxation statute cannot be questioned by the tax payers merely because different rates of taxation are prescribed for different categories of persons.

The court observed that Section 6 of the TNVAT Act, 2006 is not a charging Section. It was always open to the dealers to fall back on Section 5 on the deemed sale.

The court also held that it was open to the State to impose any restriction or conditions for availing concession for payment of output tax. In the present case, the authority of the State to levy tax on sale of goods is traceable to Entry 54 of List II of Seventh Schedule as it stood then.

"The economic wisdom of a tax is within the exclusive province of the Legislature and it also extends to the allowing of depreciation on specific items on a higher percentage. It is not the function of the court to consider the propriety or justness of the tax or enter upon the realm of legislative policy."

The court did not find the amendment to Section 6 as imposing any restriction on purchases from other States or import and found that there was a rationale behind the amendment. The court also observed that "In fiscal or taxing enactments, it is not necessary that every enactment should be backed by objects and reasons".

According to the court there were two objects sought to be achieved through the amendment - (i) to curb the loss of revenue accrued due to interstate purchase of goods or import; and (ii) to create a level playing field for the local dealers. Therefore, the condition is well found on intelligible differentia and has a nexus to the object that is sought to be achieved.