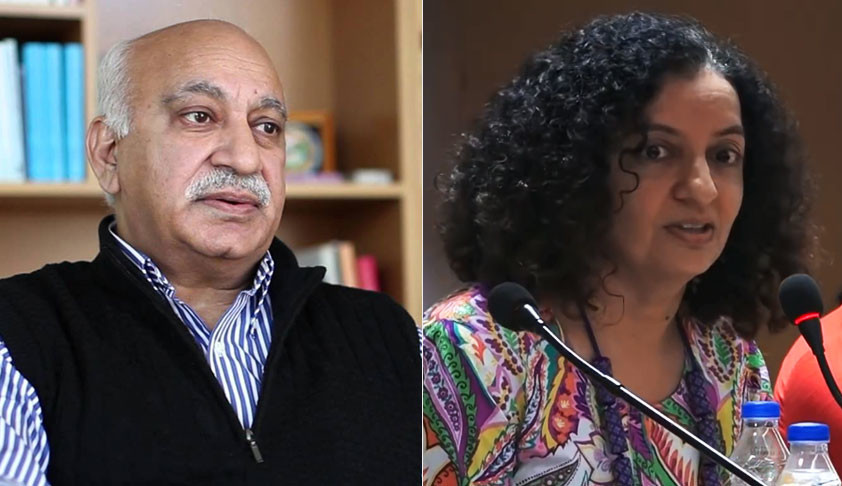 On Lack of Evidence on the Part of Ms. Priya Ramani to Prove her case

The main thrust of Ms. Geeta Luthra's argument was to show how the accused, Ms. Priya Ramani fell short of proving her allegations with absolutely nothing to back her statements or any material evidence or witness to support.

Senior Adv. Geetha Luthra had argued that whenever an allegation is made in the court of law, such allegation has to be backed up by some supporting piece of evidence which in this case was absence since the very beginning.

"You make an allegation, I denied that. You have an onus to prove it, you haven't discharged the onus. Where is the onus in this case? There has to be a proof. It cannot be in the air." She argued.

She further argued that the learned counsel for the accused, Ms. Rebecca John had not proved the allegations whereas she had merely put forth suggestions which were recorded by the Court. According to Ms. Luthra, suggestions are not sufficient in proving someone's case and that there has to be sufficient material on record to substantiate the grave allegations put forth by the accused.

"Whether you make a whisper that a person is a thief, or a cheat or anything that cast imputations on him, you have to back it with evidence." She said.

On Refuting Meeting the Accused in a Hotel at Nariman Point

A major part of the arguments advanced by Adv. Geeta Luthra was about the alleged meeting between Ms. Priya Ramani and Mr. MJ Akbar at a hotel in Nariman Point, Bombay in the year 1993. This meeting had been one of the subject matter of Mr. Akbar's cross examination done by Ms. John.

The meeting dates back to 1993 when Mr. Akbar held the position of being the editor at Asian Age Newspaper and according to Ms. Ramani, she had alleged sexual misconduct by him after she applied for the job in the newspaper and was allegedly called by Mr. Akbar for a meeting at the hotel.

Ms. Geeta Luthra refuted the allegations of meeting the accused in the hotel by arguing that there was no CCTV footage, phone call recording, conversation evidence or any other material record which had been placed on record by the accused to prove the serious allegations made against the complainant.

"Just by calling it my truth, doesn't make it a truth. It still remains a truth. You haven't proved whether you have made a call to complainant, you haven't proved that you met the accused. This version is a figment of imagination and not truth. Clearly it is improvable after 30 years. After 30 years, you are trying to bring something without bringing any evidence. It is all in the air. It is an air bubble. No proof is generated." She said.

On Failing to Comply with Legal Recourse and Due Process

Ms. Luthra went ahead to argue that the accused Ms. Priya Ramani had in fact failed to comply with due process of law. According to her, the fact that she chose the recourse of going on a social media platform rather than taking recourse of legal proceedings shows the mala fide intention of the accused of implicating Mr. Akbar on false sexual harassment charges.

"If at all you had a criminal course of action, which you had none, you had remedies available in law from 1860. Since when do we have the IPC? 1860. Lord Macaulay made IPC. It has a section 509. It's not a recent provision. There is a National Commission for Women, there is Vishakha judgment. There is CEDAW Convention. If you say you want to drink water but do not take a glass to drink it, then you cannot say you have no remedy. There is always a remedy, but you did not choose to take recourse of law." She continued to argue.

While arguing so, she referred to the judgment of Rupan Deol Bajaj & Anr. v. Kanwar Pal Singh Gill and argued that the accused had valid recourse to law at the time of the incident but failed to do so. According to Ms. Luthra, in cases where a personal has a grievance, there is a remedy in law.

Furthermore, on the issue of law of limitation and the long gap of around 30 years in taking legal recourse, Ms. Luthra argued:

"We have thrown limitation out in the winds. We can come 15 or 20 years later and call it a truth whereas all of this is falsity."

On the Articles Published Without Naming Any Person

Another major point of argument raised by Ms. Ramani in the matter was the absence of any name directly mentioned by the accused Ms. Priya Ramani while talking about the sexual harassment allegations. According to Ms. Luthra, as the article published with the Vogue does not highlight one particular name, the name can be of any of the former bosses that Ms. Ramani had the occasion of having.

"She says she never named him as he never did anything and she said it sarcastically. Where do we get this ability to look into what she is saying? How can we know that she is sarcastically saying this? When you said he didn't do anything, how did you call him a predator? What investigation or basis did you have to say so?"

On the Damage of Reputation of Mr. Akbar

Ms. Luthra concluded her arguments by submitting that due to the harsh and false allegations made by the accused in public domain, she had caused an irreparable damage to the reputation of the accused because of which a case of criminal defamation was filed by him.

She also argued that if the purpose of coming out in public domain after 30 years was to raise awareness, the same had not been done by the accused in a responsible manner.

Moreover, she had also argued that if the motive of the accused in coming forward in order to raise awareness was true and not mala fide, she could have reached the Ministry of Defense or any appropriate authority for making complaints against the complainant who was then holding the position of Minister in the said Ministry.

"By maligning someone which is the easiest thing to do, you cannot raise awareness. When I ask her the question what is your basis, she said nothing. She didn't feel the need to call the Ministry or a PRO or any Officer including the complainant himself? She did not feel it in all these years to check the veracity." She argued.

She went ahead to say that if there was a good faith, the accused would have at least issued a corrigendum or presented any evidence which in this case was never done and that such a manner can never serve public good. "Public good doesn't mean that you can malign somebody. When you are making public statements about somebody, you need to be respectful and mindful in doing so." She continued.

The matter will now be heard on 14th January at 11 AM.

Full details of the proceedings can be accessed here: