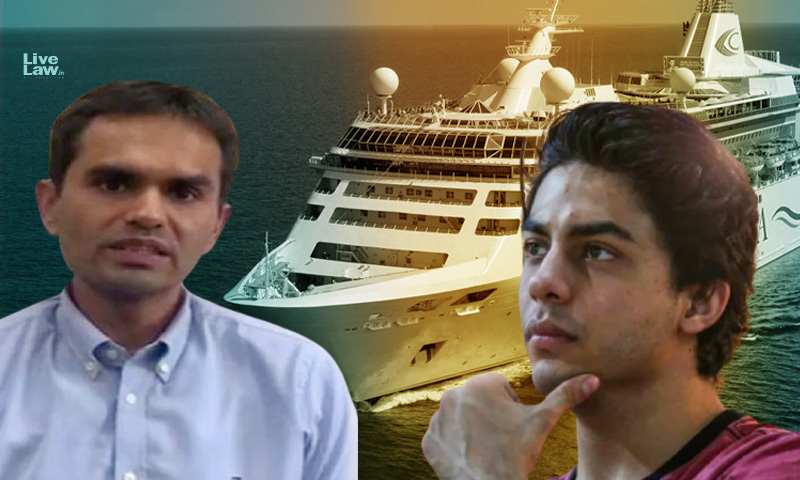 The Narcotics Control Bureau has approached the Special NDPS Court against the notarised affidavit of one of its own witnesses alleging extortion and against the "lurking threat of arrest" to its zonal director Sameer Wankhede. NCB's application seeks directions that no action or cognizance be taken on witness Prabhakar Sail's affidavit without the Special NDPS court or any other...

The Narcotics Control Bureau has approached the Special NDPS Court against the notarised affidavit of one of its own witnesses alleging extortion and against the "lurking threat of arrest" to its zonal director Sameer Wankhede.

NCB's application seeks directions that no action or cognizance be taken on witness Prabhakar Sail's affidavit without the Special NDPS court or any other court's permission, and the same should be kept in abeyance till then.

"This Hon'ble Court be pleased to direct that no cognizance of such purported Affidavit dated 23.10.2021 be taken or the same perused in any manner except in the form or manner directed by this Hon/ble Court or Court of competent jurisdiction, if at all."

Moreover, the NCB seeks a direction that without the Special court's permission no pleading in the context of the cruise ship drug case be filed, except in accordance with law, to maintain the sanctity of Court proceedings and of an on-going investigation.

Special Judge VV Patil heard NCB's counsel for 45 mins in the morning session and said it would pass appropriate orders.

"The Applicant further states and submits that, this Application is filled in extreme urgency and in the interest of justice to avoid an independent and reputed agency from being defamed and tarnished by unscrupulous elements who intend to further their vested interests," the plea states.

Attached to the application is an affidavit by Zonal Director Sameer Wandheke who has claimed that there is a lurking threat of arrest to him and that he is being targeted by a political figure.

The NCB has said that the allegations of extortion bid in the Aryan Khan case raised by Prabhakar Sail, one of the panch witnesses in the case, is an attempt to scuttle the investigation and to create undue pressure on the agency.

"The allegations of alleged extortion against NCB officials and money changing hands is a clear attempt to undermine the ongoing investigation and create pressure with mala fide and ulterior motive", the NCB said.

The NCB's plea states that Sail's affidavit is in a subjudice matter as Aryan Khan's and other bail applications are listed for hearing before the Bombay High Court and the accused are charged with conspiracy. "The contents of the affidavit are false, mischevious and misleading," the application states.
Regading the alleged reference to Shahrukh Khan's manager Pooja Dadlani in the affidavit, where Sail says that she met panch witness KP Gosavi after the raid, the NCB's plea states-
"What is dubious and untrustworthy, among others, is a reference to a lady in para 13 who allegedly met one of the panchas. It also appears that the said lady appears to have influenced such panchwitness when the investigation is on-going, such interferenace at the stage of investigation is a malafide attempt to ensure that the same is derailed and the quest of truth is obstructed."

Wankhde in his affidavit states that, "after spear heading this cruise investigation, I have been personally targeted especially by a known political figure for reasons best known to him.

Wankhede says that the only justification seems to be the arrest of the leader's (Cabinet Minister Nawab Malik's) son – in- law in an NDPS case and his subsequent release on bail.

"...from time to time there is a series of vendetta targeted at me and my family members who are victims of such defamatory attacks and false, frivolous and vexatious allegations.… I was threaten to be arrested and to be dispelled from my job/service. There is a slew of attacks against me and my family", he said in his affidavit.

He says that he is under a lurking threat of arrest as it does not suit some vested interests. Moreover, the court may take "serious cognisance of such pressures extended on officers like us in a subjudice matter with malafide intent so that the truth does not come to light. "