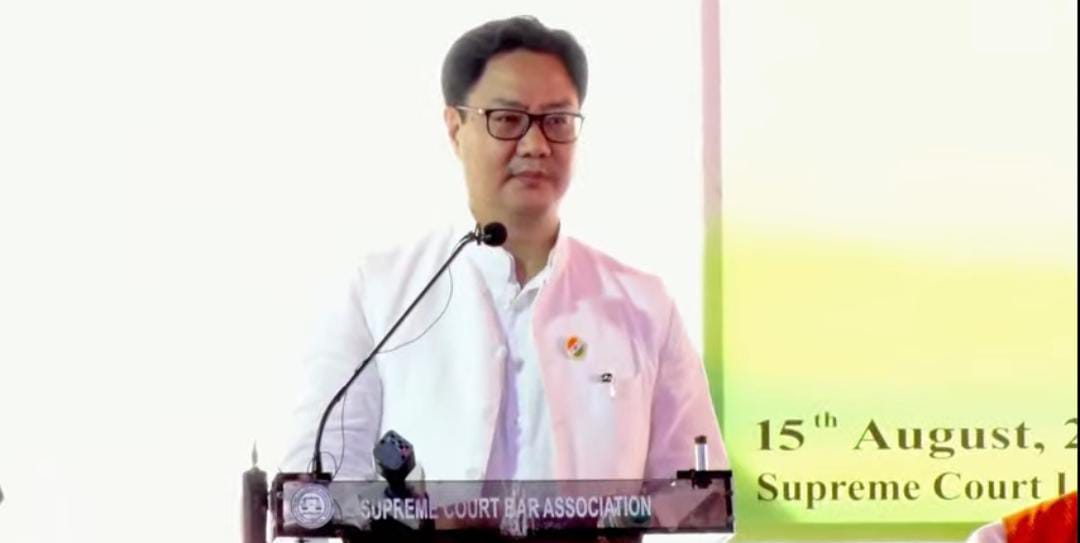 The Hon'ble Union Minister for Law & Justice, Mr. Kiren Rijiju was invited as the 'Guest of Honour' at the 75th Independence Day celebrations organised by the SCBA in the Supreme Court Complex. While stating that no country could face the unique set of problems which India faced, he said that while it was easy to pass sweeping comments on the working of the State, it was not easy to hold a position in one of the organs of the state.

At the outset, he highlighted that starting now, till 2047, India will be celebrating the 'Amrat Kal'. He stated that the government had set many targets which would ensure that India becomes a developed country by 2047 when she celebrates her 100 years of independence. He stated that for realising the strong vision of the Prime Minister to make India a developed nation, all three organs, namely, the Legislature, the Executive and the Judiciary, had to work together as a team.

Law Minister Rijiju congratulated the judiciary for taking "a lead role in the celebration of this independence year and Amrat Mahotsav" by decorating all court buildings in tricolour across the country.

He then stated that while many might believe that judiciary, legislature and executive work very differently, the same was not the case and that all three organs worked closely but because of the sensitivity of the nature of the work carried out, they seem to work separately. While elaborating upon the same, he stated that–

"There is nothing wrong in somebody who is occupying a constitutional post, fighting for the preservation of its independence as well as its authority. But at times you have to understand what is the story of the other side of the fence...In the parliament too, many will question the law minister. People ask the question to the law minister - "Why is there a pendency of cases, why is there so much delay in delivery of justice?" At times I become helpless because I cannot answer in definite terms...I have to also understand that I have to come back to judiciary, talk to Chief Justice, I have to interact with judges. I have a 'laxman rekha' with me which I will never cross."

Rijiju underscored the uniqueness of all organs of the state and the challenges faced by them. To elaborate upon the same, he stated that no country's judiciary had a load similar to that of India where each judge disposed off 40-50 cases in a day. He also highlighted the unique work carried out by Indian members' of the Parliament by recalling his meeting with Sir Patrick Cormack (Member of House of Lords of the United Kingdom). He stated that–

"When I was in England for Parliamentary Interaction Programme in 2004, I was much younger. I interacted with the Senior most MP in the house of common known as the father of the house, Sir Patrick Cormack. Now he has moved on to become the member of House of Lords. I learnt so many things from him. But more shocking was what he learnt from me. There, each constituency, each Lok Sabha, what they call the member of the house of common has 70,000 voters. In India, on an average, (one member of the parliament) represents 3 million (voters). There, the voters don't go to the MP's house to seek help. There is no long queue in front of the house of the MP to seek education help, to seek medical help, to seek electricity connection- all kinds of police case...So many issues which cannot be confined to one subject- a spectrum of issues. Even when I was an MP, before becoming Minister, even if you see throughout the day, you will never finish meeting all the people who are waiting to meet the local MP. At the same time, MP is expected to perform his parliamentary duties too. So all these issues are unique to India. The only country which is larger than India in population and size is China which is not democratic! So no country can face the problem which India is facing."

After highlighting the uniques issues faced by Indian state organs, Minister Rijiju stated that while it was easy to pass sweeping comments on the working of the State, it was not easy to hold a position in one of the organs of the state.

While underscoring the importance of work carried out by the executive, he stated that while there were challenges in every sphere of life, the government, by virtue of being the executive and being the authority to do all the executive work had a larger responsibility. He highlighted that the Prime Minister had laid down the priorities of the government, which included its commitment towards establishing a robust judiciary in our country. He stated that he understood that without government's proactive and supportive role, it would be difficult for judiciary to perform its duties in isolation.

While speaking about his role as the Union Minister for Law and Justice, he stated that while many people may believe that he did not understand law owing to the lack of a long experience in the area of legal practice, he believed that he had a clear cut role of playing a a bridge between judiciary and executive and to some extent, the parliament of India.