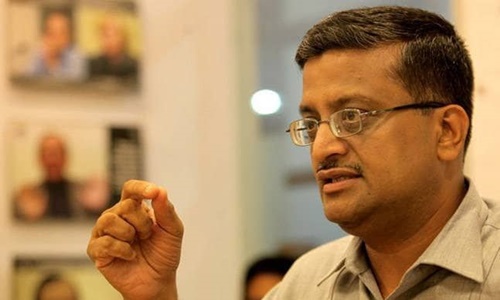 x
Court says officers of such professional integrity needs to be protected from damage of adverse remarks.

In a significant win for IAS officer Ashok Khemka, presently posted as Principal Secretary, Department of Sports in Haryana Government, the Punjab & Haryana High Court on Monday not just expunged adverse remarks made by Chief Minister ML Khattar in his Personal Appraisal Report (PAR) but also observed that, "Since number of such officers whose integrity is beyond doubt and who...

In a significant win for IAS officer Ashok Khemka, presently posted as Principal Secretary, Department of Sports in Haryana Government, the Punjab & Haryana High Court on Monday not just expunged adverse remarks made by Chief Minister ML Khattar in his Personal Appraisal Report (PAR) but also observed that, "Since number of such officers whose integrity is beyond doubt and who have professional integrity of higher standard is depleting very fast, therefore, they need protection from being damaged by recording adverse remarks against the record".

A bench of Justice Rajiv Sharma and Justice Kuldip Singh said so while deciding Khemka's appeal against an order of the Central Administrative Tribunal (CAT) which had rejected "in toto" his application for expunging remarks made by Khattar as the accepting authority and restoration of a grade of 9.92 as awarded by Cabinet Minister Anil Vij in his PAR for the period April 8, 2016 to March 31, 2017, when he served as the Principal Secretary to Government of Haryana, Science and Technology, Department.

Even as the CAT rejected his application and the high court allowed his plea on Monday, Khemka's statutory representations/comments on his PAR remain not decided by the Chief Minister.

In the instant case, Khemka, a 1991-batch IAS officer known for exposing Robert Vadra-DLF illegal nexus and land scams in Haryana, had challenged his downgrading by the CM while also making adverse remarks.

The Chief Secretary, who was the reporting authority, had graded him 8.22 and 8.27 on several attributes even as it recorded that "his integrity is beyond doubt".

In his comments on Khemka's overall qualities, the Chief Secretary had said "Sh. Khemka is an intelligent and experienced officer. The officer possesses a very good understanding of various Acts and Rules. He can examine an issue thread bare bringing out all the pros and cons. He possesses good command over the written and spoken word. Against the revised plan budget estimate of Rs. 26.62 crores of the Science and Technology department, Rs. 25.35 crores was spent. Five years backlog for Haryana Vigyan Ratna and Yuva Vigyan Ratna Awards was cleared by him. The officer fully understands the power of social media. He frequently tweets on diverse subjects, including matters not directly related to his department. He has a sympathetic attitude towards the Scheduled Castes and weaker sections of society."

The reviewing authority i.e., Minister Anil Vij, however, gave him an overall grade of 9.92, while commenting that, "Mr. Ashok Khemka is well-known in the county for effective professional integrity under very difficult circumstances. Despite being in a relatively unimportant post, Mr. Ashok Khemka has shown excellent achievements under severe constraints…"

However, when the report reached Chief Minister Khattar, he downgraded the figure from 9.92 to 9 while stating that the "report of the Reviewing Authority is slightly exaggerated" and that there was no specific mention of constraints faced by Khemka.

Following this, on January 12, 2018, Khemka sent his comments on his PAR wherein he pointed out the delay of 184 days caused by the Chief Minister in grading him.

On the CM pointing out the reporting and the reviewing authority not mentioning the constraints faced by him, Khemka spoke about "severe constraints" faced by him in the form of "pervasive corruption" and the witch-hunting and hounding he is being subjected to from October 15, 2012, when he cancelled the mutation in Robert Vadra-DLF land licensing scam in Gurgaon.

He made mention of several false inquiries initiated against him, frequent transfers, inconsequential postings without work as some of the many constraints he has been facing at work and in his personal life.

He also spoke about the lack of full-time director in the department.

On his representation, Vij wrote to Khattar on February 12, 2018, endorsing Khemka's representation while also speaking about how the Department of Science and Technology witnessed perceptible higher performance as compared under Khemka's tenure.

Thereafter, Khemka sent a request to the Chief Minister on April 4, 2018, to decide the representation but in vain.

Khemka then moved CAT submitting that the remarks made by Khattar were barred by delay and therefore, the view of the reviewing authority had attained finality.

The tribunal dismissed his application forcing him to move the high court.

"Reference has been made to 'excellent achievements under severe constraints'. It has also been mentioned that he is very innovative and has immense potential which can be utilized better by government. The Accepting Authority has recorded that the Reviewing Authority or the officer himself has not specified any constraint what to talk of 'severe constraints'.

"We are of the view that some of the matters are better understood than said in expressed words. The severe constraints in which an honest and upright officer works under the political leadership are well known. There are so many pulls and pressures and the officer has to work according to the rules despite all these pulls and pressures. The Reviewing Authority has recorded that the petitioner is well known in the country for effective professional integrity under very difficult circumstances."