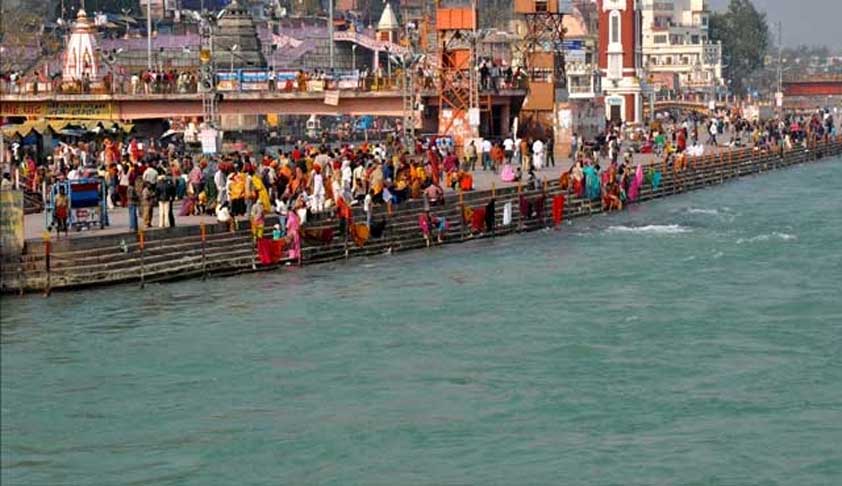 In a significant move, given the way there has been lackadaisical approach on part of the authorities in the past to implement NGT's orders, National Green Tribunal pulled up states of Bihar, Jharkhand and West Bengal over inaction on their part to respond to the Green Tribunal for unabated damage to river Ganga.

Green Tribunal was considering, in furtherance of its order dated 14.05.2019, the matter of execution of directions of the Tribunal dated 10.12.2015 and 13.07.2017 with regard to prevention and remedying of pollution of River Ganga in M.C.Mehta v Union of India & others.

Tribunal remarked that failure of the authorities is posing a danger to the environmental rule of law. It said that continued failure is not only resulting in damage to the environment but also to public health. Expressing dissatisfaction over the current state of affairs, it remarked that unless prompt and stringent action to control pollution of River Ganga is stopped, it may be left with no option but to recover cost of restoration from officers responsible for the failure and may also require their prosecution.

"We record our dissatisfaction with the progress particularly after all prescribed timelines are over and no adequate action has been taken against identified polluters, law violators and officers responsible for failure for vigorous monitoring, encroachments and pollution are undisputed. Orders of this Tribunal remain uncomplied."

Tribunal commenting over the status report filed by the state of Uttarakhand with respect to Phase-I, Segment-A said that while it purports to give the status of compliance with reference to the observations and suggestions of the Monitoring Committee, directions with regard to setting up of the Sewage Treatment Plants and preventing untreated sewage and effluents in the River Ganga have not yet been complied with in spite of the expiry of the timeline. Fifteen projects for additional STPs are said to be under construction, it noted, directing for completion of construction expeditiously. Chief Secretary, Uttarakhand was directed to monitor the matter, identify the persons responsible for failure, take credible action and file his own affidavit before the next date.

Tribunal said that Ganga pollution control has to be model for remedying pollution of other 351 polluted river stretches.

"We make it clear that the NMCG [National Mission for Clean Ganga] will be treated to be doing its duty only if there is decrease in pollution load and improvement in water quality in the River Ganga. The monitoring criteria must mainly focus on reduction of pollution load and improvement of water quality ensuring this must be 5 specific responsibility (sic) of identified officers. Ganga pollution control has to be model for remedying pollution of other 351 polluted river stretches."

Discharge of Effluents a 'Criminal Offence'

Commenting on Phase-I, Segment-B from Haridwar to Unnao, it remarked that UP Pollution Control Board has filed an action taken report, indicating action against polluting industries. But Tribunal made it clear that in view of the statutory provisions of the Water (Prevention and Control of Pollution) Act, 1974, the State PCB must forthwith prohibit any industrial polluting activity instead of partially allowing such activity and partially permitting the same.

It said that discharge of effluents is a criminal offence, atleast for commercial purposes, and such offence cannot be permitted. It said further that the compensation regime should be suitably revised so as to recover the actual cost of restoration. It directed State of Uttar Pradesh to provide funds to the Central Pollution Control Board for remediation of Chromium dumps at Kanpur Dehat, Khanpur and Rakhi Mandi.

"Proper e-flows may be ensured from the Narora Barrage by the NMCG and the State of Uttar Pradesh and compliance status may be furnished. The State of Uttar Pradesh may also take expeditious action for removing encroachments, identifying and notifying flood plains on the pattern of State of Uttarakhand as directed above. Tapping of drain and other remedial steps for preventing pollution of River Ganga may be expeditiously taken and completed which may be monitored by the NMCG. The Chief Secretary, Uttar Pradesh may personally monitor and ensure zero tolerance approach to the pollution of River Ganga and take stern action against those responsible for failure. An affidavit be filed by the Chief Secretary before the next date. This direction will also apply with regard to Phase-II, III and Phase-IV which will also cover the States of Jharkhand, Bihar and West Bengal."

River Ganga Pollution Having an Adverse Effect on Public Health

Tribunal noted through tabular representation that in respect of State of Bihar, there is practically no progress, as not a single project has been completed. Almost similar is the position with regard to State of West Bengal where out of 22, only 03 projects are said to have been completed. Even for Jharkhand progress is not adequate, it noted.

It directed the Chief Secretaries concerned to monitor and file their respective affidavits. Court said that mandate of National Mission for Clean Ganga (NMCG) is to act in a "mission mode". It cannot afford to act leisurely without rigid timelines, it said. Consequence of such inaction for inadequate progress of NMCG is that pollution of the River Ganga continues having adverse effect on the public health which defeats the object for which NMCG has been set up. The timelines extending to long period of two to three years, even after more than two years of order of the NGT cannot be held in the spirit of the orders of the Tribunal and the mandate of law, and need to be revised and preponed, Tribunal said.

"We note that as per the stand of the NMCG, out of 31 projects undertaken, only 5 have been completed and work in respect of 4 projects is still underway. For the remaining work the timeline is proposed extending up to December, 2021. Such progress can hardly be held to be satisfactory in view of the mandate of orders of this Tribunal dated 13.07.2017."

Tribunal expressing the concern over non-implementation of orders on ground noted that matter has been monitored by the top court of the country since 1985, before even the passage of orders, but non-compliance with orders passed in last 34 years is a matter of serious concern. It expressed the hope that after its interaction with the Director General of NMCG, the matter will be taken up seriously.

Tribunal expressed dissatisfaction over non-representation of the states of West Bengal and Jharkhand despite orders of the Tribunal on same.

"The States of West Bengal, Bihar and Jharkhand are not represented in spite of orders of this Tribunal dated 14.05.2019 by which we recorded strong disapproval to such attitude of the said States. Such insensitivity in a serious matter is a matter of concern. We note that O.A. No. 390/2018 is also listed along with these matters in which State of Bihar is a party."

It directed the States of Bihar, Jharkhand and West Bengal to deposit a sum of Rs. 25 Lakhs each by way of interim compensation for the continued damage to the River Ganga, which may be spent on restoration of the environment.

It directed National Mission for Clean Ganga (NMCG) to file its action taken report in respect of progress on parameters of reduction of pollution load, improvement of water quality and further road map and also identifying the persons accountable and also stating the action taken for the past lapses within four weeks from the passage of this order.

It further asked authorities to proceed in accordance with the River Ganga (Rejuvenation, Protection and Management) Authorities Order, 2016, issued by the Central Government which lays elaborate mechanism to deal with the matter and confers wide regulatory powers. NMCG may compile information about the steps taken under the said order, it said further.

Ministry of Environment, Forest & Climate Change (MoEF&CC) was asked to nominate its representative in terms of Para-21 of the order dated 14.05.2019 preferably within one week from passage of the order. The guidelines for bio-diversity parks for the whole country were asked to be finalized within four months.

Tribunal listed the matter for further consideration on 7th of August, 2019.