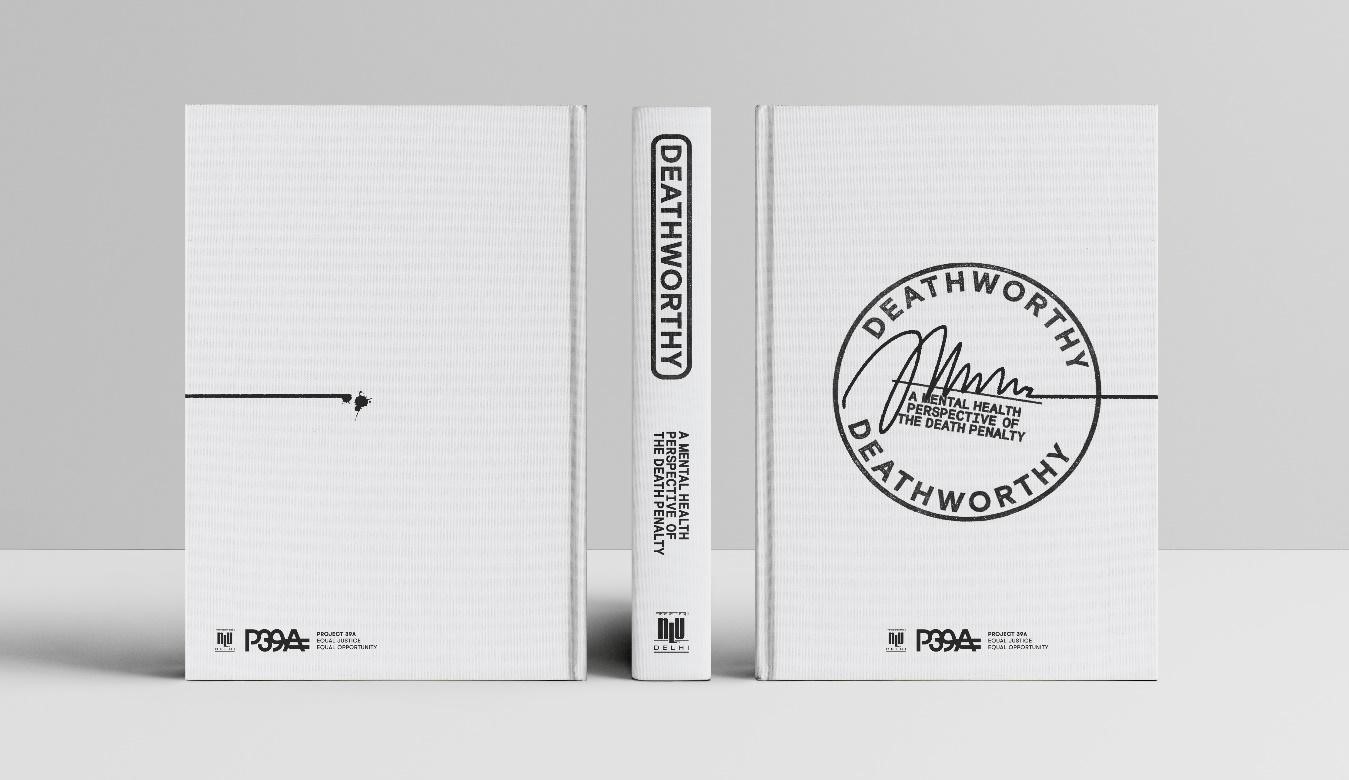 Building on its pioneering work on the death penalty [ Death Penalty India Report (2016), Matters of Judgment (2017), Death Penalty Sentencing in Trial Courts (2020), Death Penalty Annual Statistics, 2016-20 ], Project 39A's Deathworthy: A Mental Health Perspective of the Death Penalty (Report) delves into the psychosocial realities of persons on death row in India. Spanning five states, the Report interviewed 88 prisoners and 110 families. Deathworthy explores the (a) psychiatric concerns among death row prisoners, (b) intellectual disability among prisoners sentenced to death, and (c) the psychological consequences of being on death row.

An overwhelming majority of death row prisoners interviewed (62.2%) had at least one mental illness which is much higher than the community population and also the general prison population figures. Majority of the prisoners were diagnosed with Major Depressive Disorder (MDD), General Anxiety Disorder (GAD) and Substance Use Disorder (SUD). Exposure to adversities has been linked to disturbances in psychological, cognitive, emotional and behavioural development, including later in life. The Report reveals that 82% of the prisoners interviewed experienced three or more adverse childhood experiences and over 60% experienced three or more traumatic life events. It is also the first to inquire into the presence of intellectual disability in a prison population in India. The figures show that around 11% have intellectual disability, these figures are about 20 times higher than the community population.

Maitreyi Misra, Lead Author and Head of Mental Health and Criminal Justice at Project 39A said "This Report is a modest exercise in providing an insight into the harsh and often unforgiving life that the prisoners have faced. We often willingly ignore the social realities and surroundings of prisoners sentenced to and living with the death sentence. Through this, we want to highlight the gaps in law and provide insight into the changing relationship between criminal law and mental health, particularly in the context of the death penalty. There is an urgent need to reappreciate facets of the death penalty and engage with these issues in a more nuanced manner."

While the discussion on mental health is still at a nascent stage in India, issues of mental health within the prison population especially those on death row are largely understudied. In its foreword, Dr. Pratima Murthy (Director, NIMHANS, Bangalore) and Dr. Sanjeev Jain (Professor of Psychiatry, NIMHANS, Bangalore), tell us about the web that the report attempts to untangle in its study of persons on death row. "While the notion that mental illness is associated with crime is often exaggerated and stigmatizing, the corollary that crime is associated with a higher than general population rate of mental illness has been suspected from centuries. We now understand that a variety of factors contribute to criminal behaviours, and that these factors can all interact in a complex manner to influence how a person thinks, feels or behaves."

The Report adopts a longitudinal view of death row prisoners and spans the life of the prisoners from childhood to their lives on death row. In addition to the qualitative interviews conducted with the prisoners and their families, the study used various psychometric tools (DSM-5 Cross-Cutting Symptom Measure-Adult screener, WHO Assist, Mental State Examination, WAIS-IV) to assess and diagnose mental illnesses, substance use and dependence, cognitive impairment and intellectual disability. 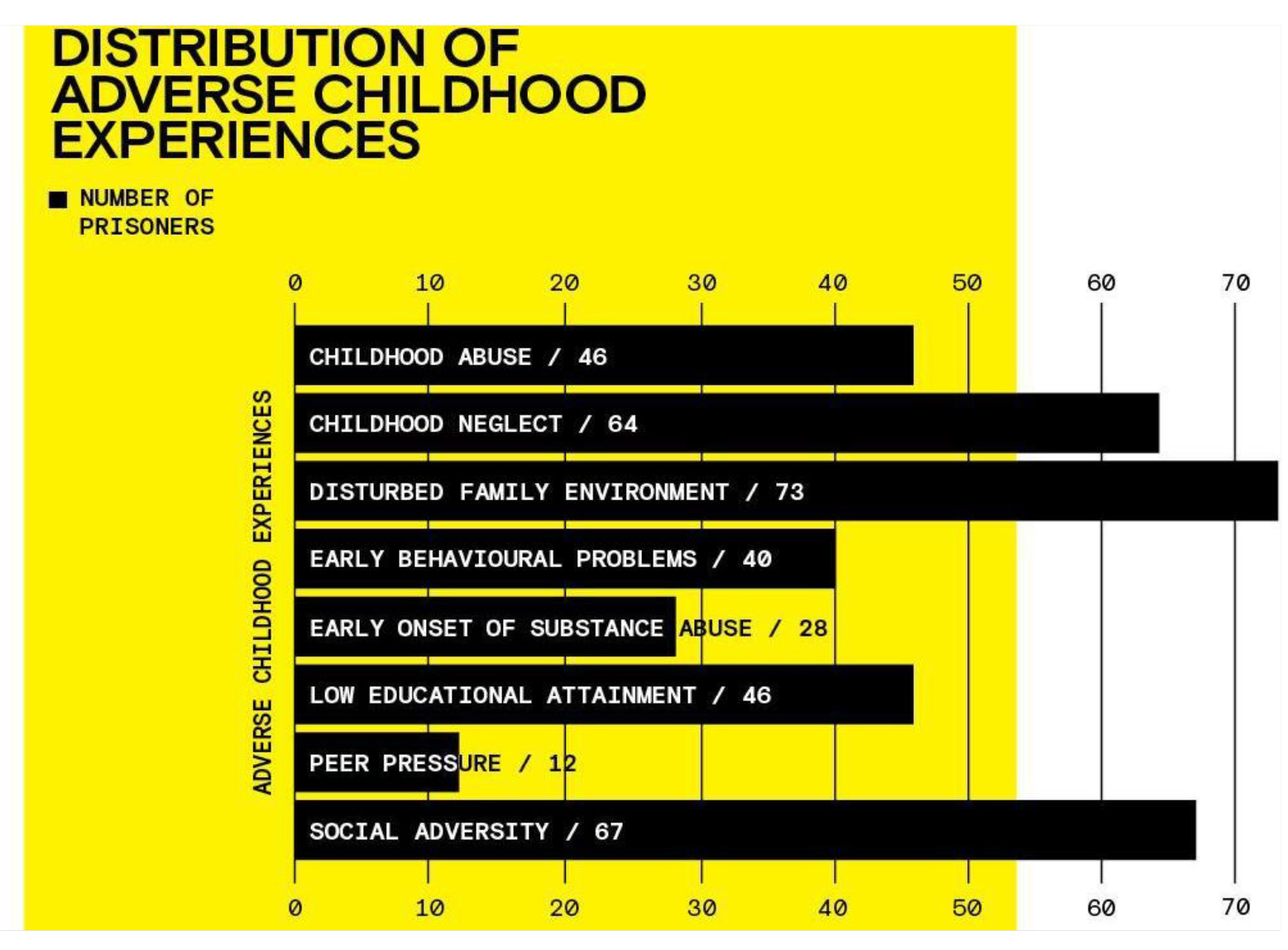 The Report also finds positive associations with other life experiences like joining the workforce early or consuming substances before turning 18. 35 out of the 46 prisoners who experienced violence and abuse in childhood, also took on adult responsibilities as children. 20 out of the 28 prisoners who had started using substances early in their lives were also subjected to abuse during childhood. The Report stresses that this very complex, inter-related background of vulnerability, is seldom identified or acknowledged. Over 80% of the death row prisoners have been exposed to three or more ACE. 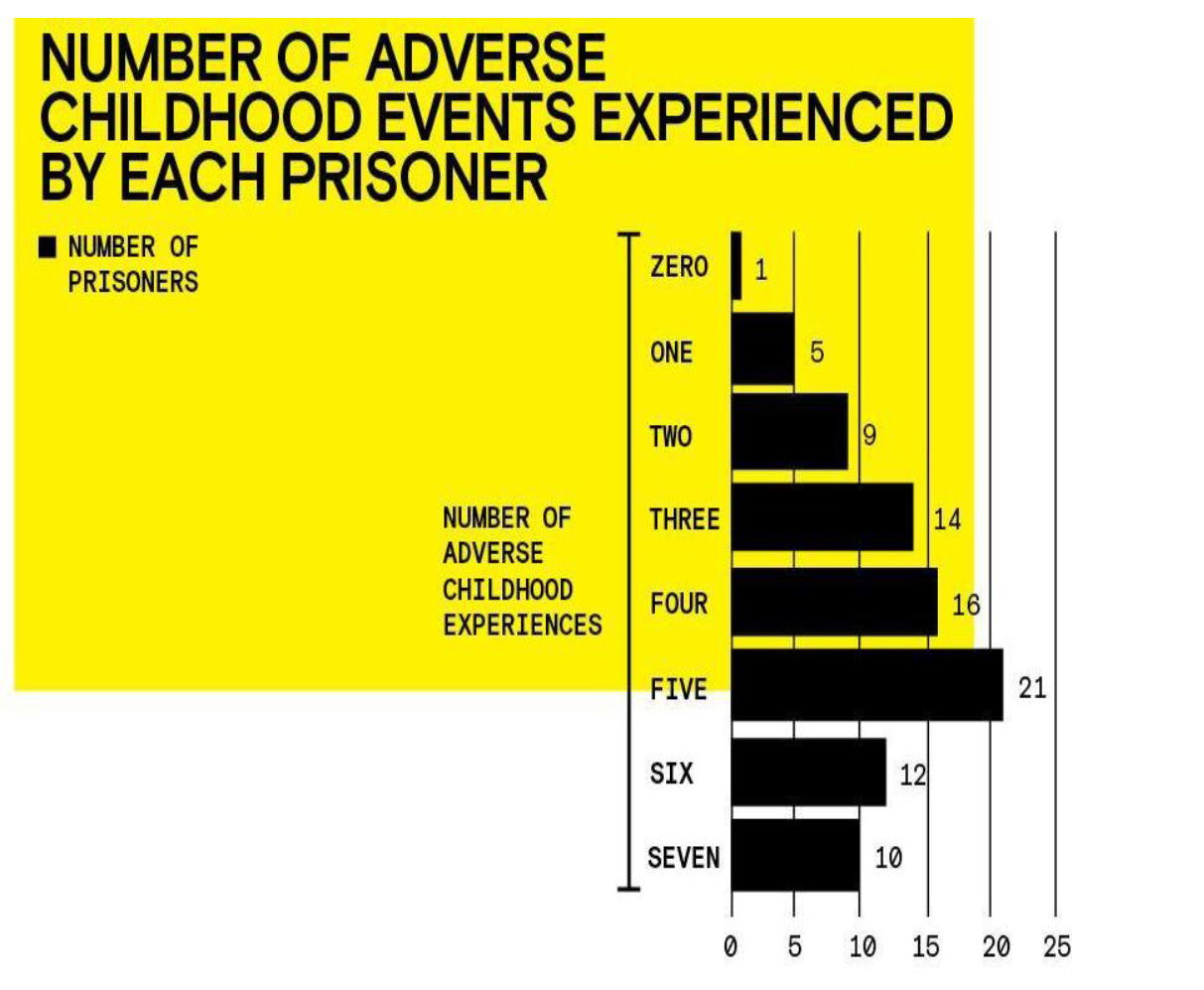 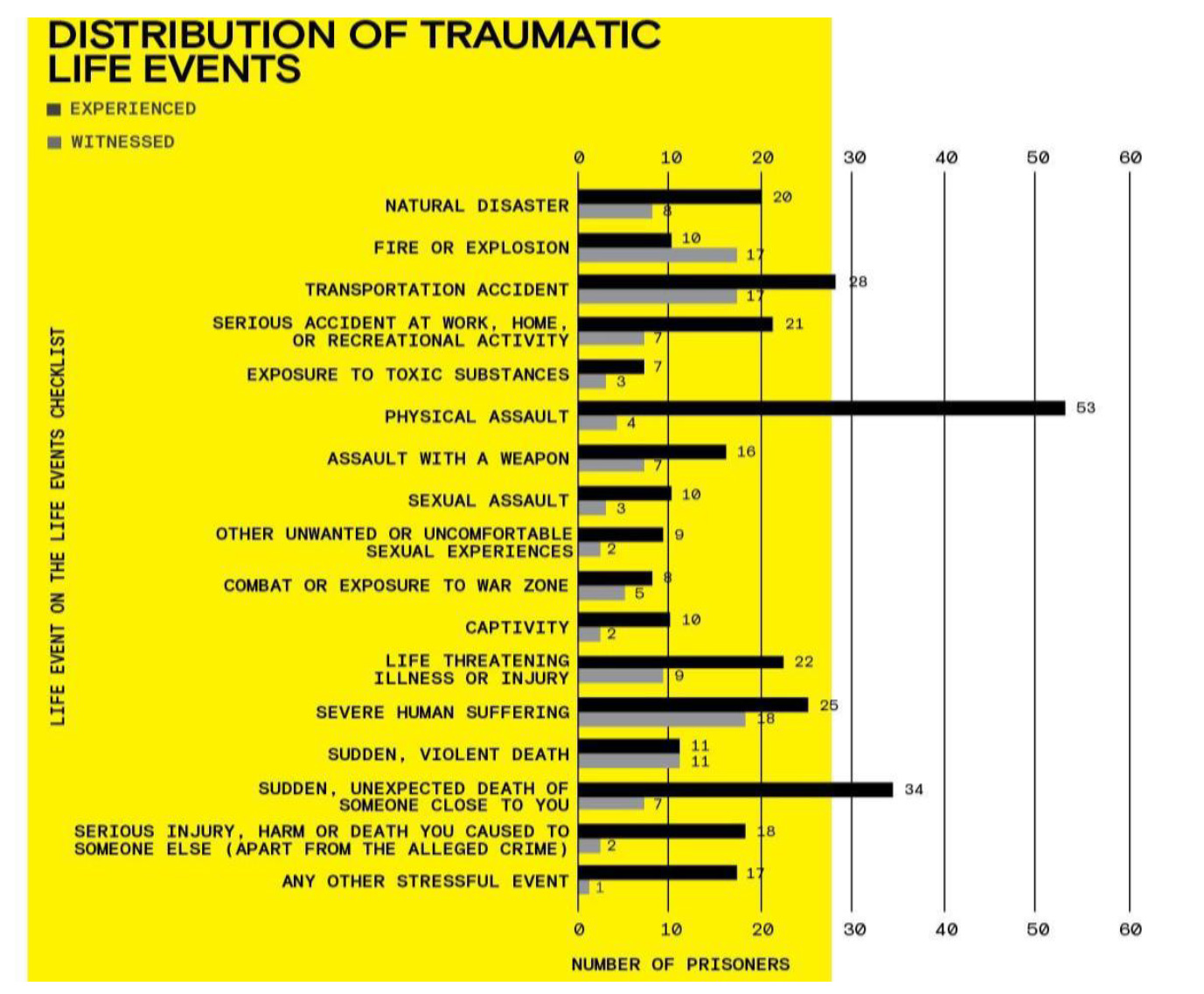 Significant associations of ACE and TE with mental illness

20 out of the 30 prisoners with MDD, reported having been subjected to abuse (verbal and physical) in childhood. Similarly, SUD among prisoners was found to have a significant positive association with low educational attainment. 16 out of the 18 prisoners with SUD had less than 10 years of formal education.

62.2% of the persons interviewed were diagnosed with at least one mental illness. The proportion of prisoners with MDD is approximately 11 times higher than that in the community population, respectively. The numbers are also higher in the case of GAD, Schizophrenia and other psychotic disorders. 29.5% of the prisoners were diagnosed with at least two mental illnesses while eight (9.1%) had a diagnosis of three illnesses. 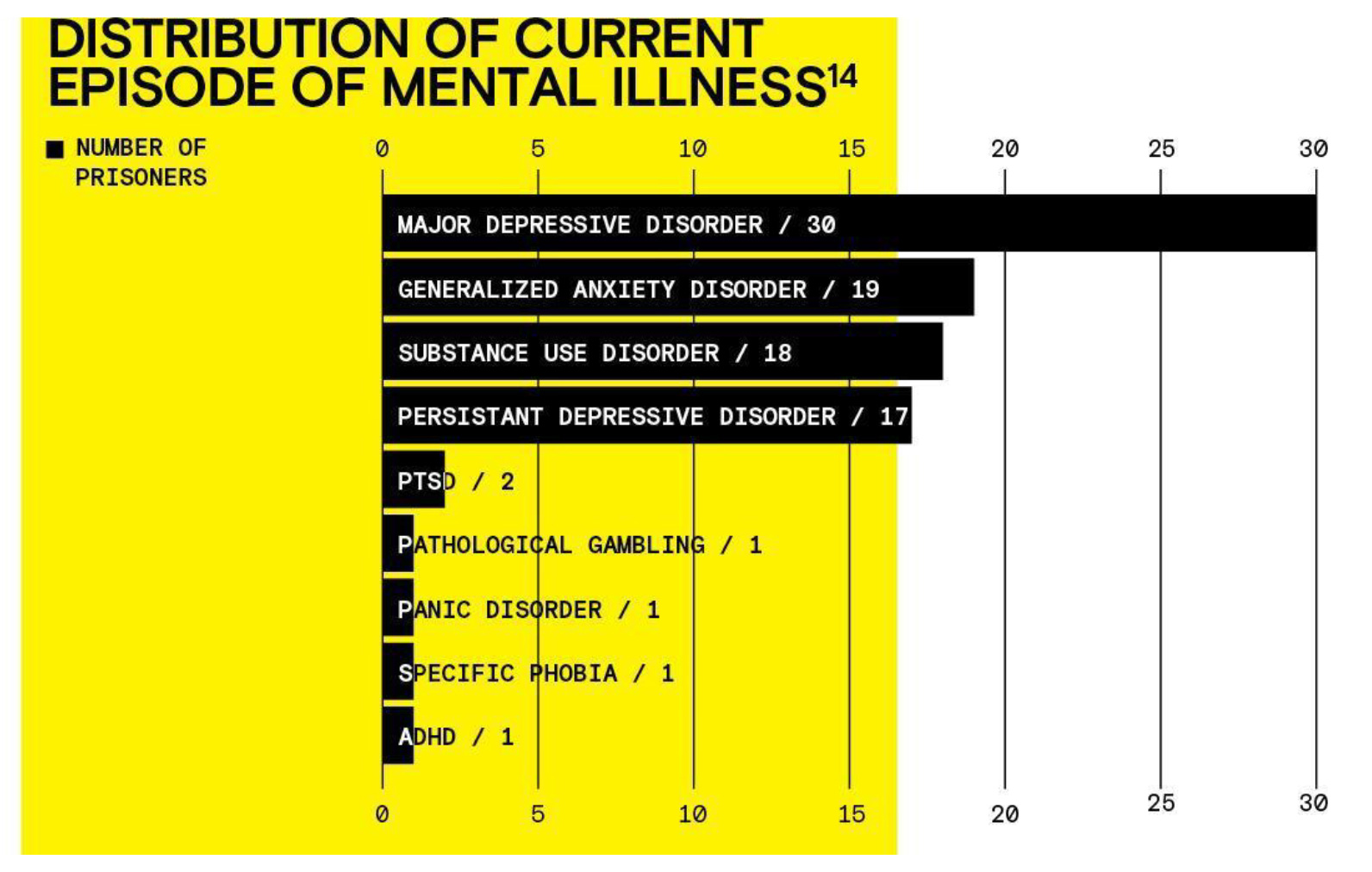 Suicide attempts and ideation may be a manifestation of mental agony, distress caused due to being on death row, alienation from family, social isolation and the uncertainty of the judicial outcomes. Over 50% had thoughts of dying by suicide in prison and eight prisoners had also attempted suicide in prison. Of the 34 prisoners who reported contemplating suicide in prison, 94.1% also reported death row distress. The figures on suicide were found to phenomenally higher than the community population. According to the 2016 study conducted by NIMHANS, 0.9% of the population was recognised as being at high risk of suicide. 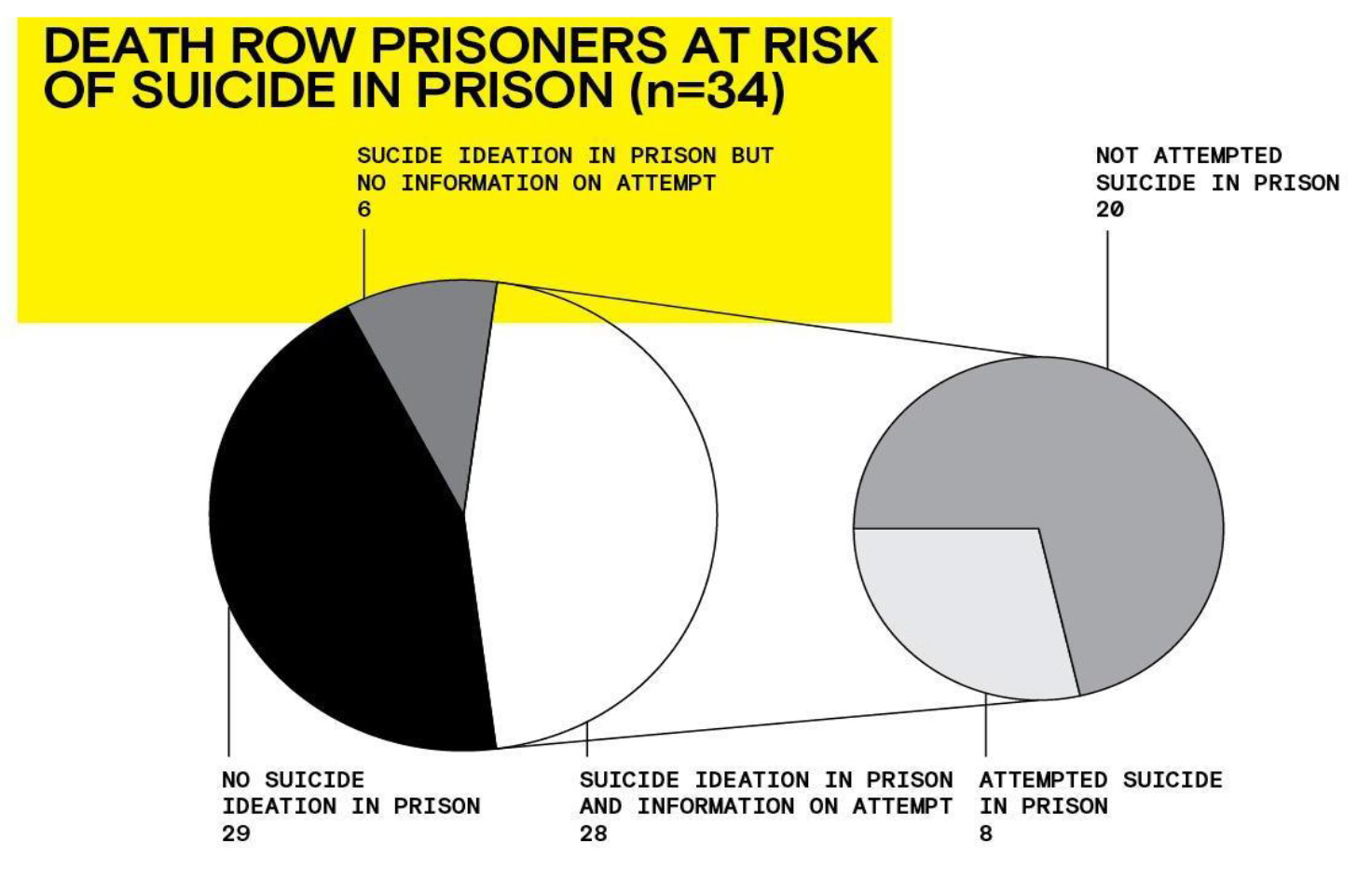 The Report also discusses the change in status from an undertrial prisoner to a death row prisoner. The "living dead" are faced with more stringent restrictions, psychological and physical violence, institutional and social discrimination, and the consequent social alienation create puts them at a higher risk of mental illness.

"Solitary confinement had an effect on my soul. My bones have become brittle; they feel spongy."

The Report also documents the violence by the prison authorities and the harassment meted out by the other prisoners.

"They attack our honour, they touch your private parts. They beat and humiliate you. The searching of the ward is physical and psychological torture. They throw away ironed clothes, they throw away the bed and step on it"

Another constant reminder is the lack of working opportunities. Barring the loss of financial incentive (however minimal), this also takes away the opportunity to mingle with others and build support systems to help them cope with their reality. Consequently, fear is their constant (and only) companion as they wait for their impending yet uncertain death.

"Killing once is better than dying every day, either leave me or just kill me. If you are repeatedly telling someone that they will die, then either kill that person or leave them. What is the meaning of life when nothing except death can be seen further? This death sentence is like slow poison, it would be better if it could be had in one gulp"

Mental health concerns among prisoners acquitted or whose sentences were commuted

"They said I have no right to live, I should be burnt alive. I listened to them silently. I thought of the dishonour caused to the family name. I thought it was better to die."

Of the 88 prisoners who were interviewed, 19 were ultimately acquitted and the sentence of 33 prisoners were commuted to various terms of life imprisonment. 13 of the acquitted prisoners were diagnosed with at least one mental illness, three had attempted suicide in prison. Half of those who were actively contemplating suicide around the time of the interview are not on death row anymore. Once they cease to be on death row, their pain and suffering is forgotten and they become just another statistic.

Dr. Anup Surendranath, Executive Director, Project 39A says "Mental health considerations of the accused before the court rarely receive the attention they deserve. While judgments like Shatrughan Chauhan v. Union of India, Accused X v. State of Maharashtra, move the needle in terms of exploring the relationship between mental health and punishment, we are far from acknowledging the normative foundations of the relevance of mental health in sentencing. This report is an effort to establish the integral and intertwined relationship between mental health considerations and determination of punishment."

They are at liberty to live their lives, in some cases, without means, but in almost all cases without being cared for or helped by a system which deemed them deathworthy.