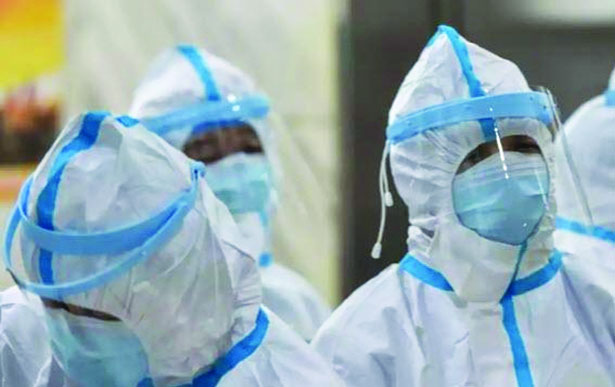 The Madhya Pradesh High Court on Thursday (08th October) ruled that ban of export in respect of KN95 Masks, Personal Protective Equipment Kits and other products does not amount to violation of fundamental right guaranteed under Article 19(1)(g) of the Constitution of India.The Bench of Justice S. C. Sharma and Justice Shailendra Shukla further ruled that its a purely policy matter and...

The Madhya Pradesh High Court on Thursday (08th October) ruled that ban of export in respect of KN95 Masks, Personal Protective Equipment Kits and other products does not amount to violation of fundamental right guaranteed under Article 19(1)(g) of the Constitution of India.

The Bench of Justice S. C. Sharma and Justice Shailendra Shukla further ruled that its a purely policy matter and the Government of India does have the power to frame Trade Policy in exercise of powers conferred under the Foreign Trade (Development & Regulation) Act, 1992.

The petitioner before this Court stated that he is a businessman engaged in the business of manufacturing and trading of Pharmaceutical, Herbal, Skin Care and Personal Protective Equipment (PPE) products.

The petitioner under the Merchanting Trade Transactions (MTT) wishes to supply KN95 masks manufactured in China to a buyer in United States of America.

[NOTE: The Reserve Bank of India in exercise of powers conferred under Section 10(4) and 11(1) of the Foreign Exchange Management Act, 1999 has framed guidelines on Merchanting Trade Transactions]

The petitioner further stated that he had negotiated the supply of PPE Kits and other goods with a buyer of United States of America and he had placed an order for purchase of KN95 Masks from a manufacturing Company based in China, meaning thereby, the petitioner wanted to purchase the goods from China and to supply them to United States of America (the goods wouldn't have touched Indian Soil) by exploiting the system of Merchanting Trade Transactions which involves an Indian Bank as well as Reserve Bank of India.

Importantly, the petitioner stated that under the Merchanting Trade Transactions, an Indian Citizen facilitates the export of any goods or material from a Company or individual of an export country (other than India) and then import / supply of the said goods to a Company in another country, which is also other than India.

Thus, in short the petitioner's contention was that the goods are neither manufactured in India nor imported to India at any point of time, however, the profit comes to India in various currencies.

Further, it was the case of the petitioner that he was aggrieved by Clause 2(iii) of Circular No.20 of revised guidelines dated 23/01/2020.

This clause restricts the trading of goods which are not permitted to be imported / exported under the prevailing Foreign Trade Policy.

The Court observed that the import and export and framing of a policy on the subject of import and export is purely within the domain of Central Government and the Central Government in exercise of its power conferred under Section 3 of the Foreign Trade (Development & Regulation) Act, 1992 read with paragraph No.1.02 and 2.01 of the Foreign Trade Policy 2015-2020 has issued various amendments from time to time and its a purely policy decision to allow import / export or of particular goods keeping in view the policy framed by Central Government.

"The conditions imposed by Government of India as well as Reserve Bank of India are of general application to every Indian entity wishing to carry on Merchanting Trade Transactions. The conditions are not specific either to petitioner's business, or to particular products such as Ventilators or Medical Personal Protective Equipment."

The Court, while citing the Apex Court ruling in the case of Kasinka Trading v. Union of India (1995) 1 SCC 274, concluded that the Courts normally do not interfere with the State policy particularly in financial matters unless fraud or lack of bona-fides is alleged and established.

"Thus, in short the statutory provisions, rules, circulars and notifications issued from time to time permits Merchanting Trade Transactions only in respect of goods that are permitted for export and import under the prevailing Foreign Trade Policy of India and the question of complete ban in respect of freedom of trade and commerce as argued by learned counsel does not arise."

"In our country keeping in view the COVID-19 Pandemic large number of front line health workers and Doctors have succumbed to Corona Virus on account of inadequate Personal Protective Equipment Kits. The Ventilators are also in short supply and therefore, the Government of India is the best judge either to ban export of the aforesaid items or to place the aforesaid items under the restricted categories."

Thus, the Court held that the circular issued by the Reserve Bank of India is in no way violating the petitioner's right guaranteed under Article 19(1)(g) of the Constitution of India.

"In light of the aforesaid by no stretch of imagination the circular can be said to be ultra vires. The restriction imposed by Government of India and Reserve Bank of India amounts to reasonable restriction and in noway violating the freedom of trade and commerce as pleaded by the petitioner. No case for interference is made out in the matter and the writ petition is dismissed."