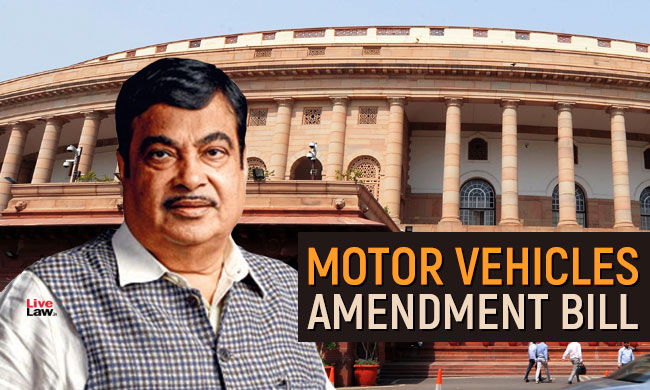 The Rajya Sabha on Tuesday passed the Motor Vehicles (Amendment) Bill 2019 with two amendments introduced by the Union Minister for Road Transport and Highways Nitin Gadkari. The Lok Sabha had cleared the Bill containing 93 clauses on July 23. Deputy Chairman of the Rajya Sabha Harivansh Narayan Singh declared the Bill as amended passed based on 108 'yes' votes as against 13 'no' votes....

The Rajya Sabha on Tuesday passed the Motor Vehicles (Amendment) Bill 2019 with two amendments introduced by the Union Minister for Road Transport and Highways Nitin Gadkari.

The Lok Sabha had cleared the Bill containing 93 clauses on July 23.

Deputy Chairman of the Rajya Sabha Harivansh Narayan Singh declared the Bill as amended passed based on 108 'yes' votes as against 13 'no' votes. The motions moved by Elamaram Kareem (CPI(M)) and Binoy Viswam (CPI) for referring the Bill to standing committee were rejected by the house majority.

Accepting the suggestions made by AIADMK in the upper house, Union Minister Gadkari introduced amendments in the Bill to change the word "consult" in the proposed Section 88A to "concurrence".  The other amendment was to change the word "may" in the proposed Section 67 to "can" with respect to the State Government's power to issue directions to State Transport Authority and Regional Transport Authorities.

Now the Bill in the amended form will go back to Lok Sabha for its approval.

Speaking about the Bill in the upper house, the Union Minister expressed the hope that the amendments will enhance road safety, improve the process of issuing licenses and permits, weed out corruption in RTO offices and usher in use of technology for regulating road traffic.

The notable changes proposed by the Motor Vehicles(Amendment) Bill 2019 are as follows.

Condition to undergo "driving refresher training course" for reviving license after suspension/revocation under Section 19, and also for compounding of traffic offences under Section 200 has been introduced.

Provision has been suggested to regulate licensing of cab aggregators, by amending Section 93 of the Act, and also by introducing definition of "aggregator" under Section 2(1A).

Through amendment to Section 200 , punishment in the form of 'Community Service' can be imposed for traffic violations, . Newly proposed Section 2(4A) Act defines "Community Service" as unpaid work which a person is required to perform as a punishment for an offence committed under this Act .

Change in Duration of License

The duration of licenses to drive light motor vehicles and transport vehicles have been changed. The period within which license has to be renewed after expiry has also been changed.

The Bill defines "good Samaritan" as a person, who in good faith, voluntarily and without expectation of any reward or compensation renders emergency medical or non-medical care or assistance at the scene of an accident to the victim or transporting such victim to the hospital as per Section 134A proposed to be added. The Bill makes provision for protection of Good Samaritans from unnecessary trouble or harassment from civil or criminal proceedings and empowers Central Government to frame Rules for their protections.

Newly proposed Section 110A enables Central Government to issue directions to manufacture to recall vehicle or components in cases of defects reported by such percentage of users as notified, or by any testing agency or by any other source.

Liability of contractor/concessionaire in case of faulty road design

Newly proposed Section 198A imposes liability on contractor, concessionaire or designated authority when their failure to follow prescribed design and standards results in death or injury.

Liability of Guardians in case of accidents by juveniles.

Newly proposed Section 199A imposes liability on guardian or the owner of the vehicle responsible for an accident caused by a juvenile.

The amendment makes non-receipt of premium one of the specified conditions, which would enable the insurer to seek exoneration from the liability., by virtue of new section proposed as Section 150 2(c)

The Amendment replaces Section 163A with Section 164. The structured formula system of payment of compensation envisaged by Section 163A of the earlier Act on the basis of Second Schedule is sought to be repealed. The Second Schedule is also sought to be taken away. This provision contemplates payment of rupees five lakhs in cases of death, and rupees two lakhs and fifty thousand in cases of grievous hurt.

Newly proposed proviso in Section 165(1) states that acceptance of payment of compensation under Section 164 will result in lapse of claim petition. Therefore, the maximum amount a claimant can get on no-fault basis is Rupees 5 lakhs in case of death and rupees two and a half lakhs in cases of grievous hurt.

Sub-section(3) proposed to be added to Section 166 states that the claim petition has to be filed within six months of the date of accident. In the original Act passed in 1988, there was a similar provision. But the said provision fixing time limit was deleted as per 1994 amendment. Therefore, a claim could have been filed at any time, without any limitation. Now, that provision has been brought back.

As per the present law, a claim for personal injury would abate on the death of the claimant, and would not survive to his estate, due to the operation of Section 306 of the Indian Succession Act. The claim would survive to the estate only if death had nexus with the injuries, and only in such cases the legal heirs would be entitled to come on record and continue with the prosecution of the claim.

The amendment remedies that situation, bv incorporation a new sub-section, Section 166(5), with a non-obstante clause which says that the right of a person to claim compensation for injury in an accident shall, upon the death of the person injured, survive to his legal representatives, irrespective of whether the cause of death is relatable to or had any nexus with the injury or not.

Power of Central Government to frame schemes for inter-state permits

Road Safety Board created as per Section 215D for advising on matters relating to road safety.

Read Bill as passed by LS