Remembering Ashok Desai And His Service To The LGBTQI Community 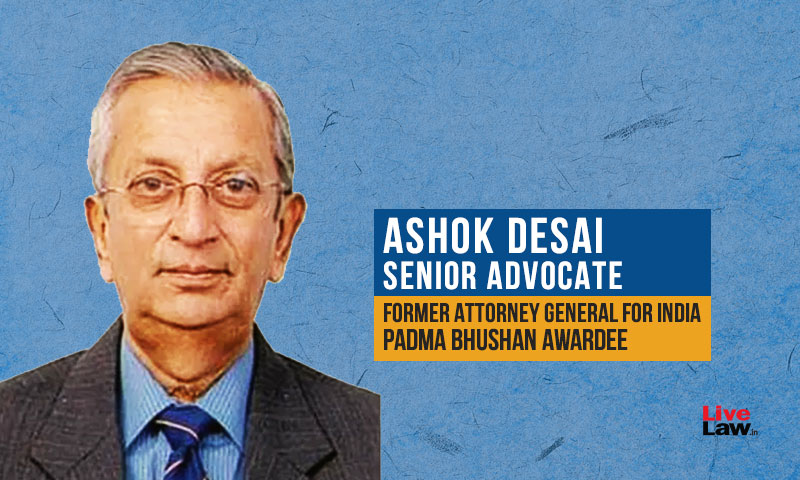 In 2006, the LGBTI community got news that Naz Foundation's challenge to the constitutionality of section 377 was likely to be heard by the Delhi High Court sometime soon.When Naz Foundation's petition (Naz Foundation v Union of India And Others, WP(C) 7455 of 2001) had been filed in December 2001 by Lawyers' Collective's team led by Snr. Adv. Anand Grover, there were few who believed that...

In 2006, the LGBTI community got news that Naz Foundation's challenge to the constitutionality of section 377 was likely to be heard by the Delhi High Court sometime soon.

When Naz Foundation's petition (Naz Foundation v Union of India And Others, WP(C) 7455 of 2001) had been filed in December 2001 by Lawyers' Collective's team led by Snr. Adv. Anand Grover, there were few who believed that an Indian Court could be persuaded to recognize the rights of sexuality minorities anytime soon. (Bear in mind that even the US Supreme Court's Lawrence v Texas ruling holding sodomy laws unconstitutional came only in 2003.) Lawyers' Collective and Mr Grover, however, had already been a few years at the forefront of the fight against section 377 – in seminars, training programmes, meetings and conferences – before filing the petition, and it was with this experience that they bet on holding the constitutional courts to the promise of the constitution.

Voices Against 377 ('Voices', for short), a coalition of 12 progressive groups (working in Child Rights, Women's Rights, Human Rights and the Rights of Persons who identify as Lesbian, Gay, Bisexual, Transgender, Hijra and Kothi) who believed that 377 must go, contacted Mr Grover and team about the wisdom of joining the litigation. They were immediately welcomed; it could only help the cause if such a broad coalition of serious like-minded organizations threw their weight behind the case. There was a problem though; it had been more than 5 years since the petition's filing, pleadings had been completed, and the matter was ripe for argument. It was very possible, if not likely, that an attempt to intervene at this stage would be refused for having come too late.

Senior Advocate, Ashok Desai, former Attorney General for India and Solicitor General of India, leading light of the bar, was requested to represent Voices in its application seeking impleadment. It was a matter of great fortune that he agreed, especially since it would require him to leave a packed Supreme Court schedule to travel to the High Court for the hearings.

Mr Desai had a reputation for fastidiousness that we quickly learned was well deserved. He insisted, before proceeding with the matter, on speaking with Mr Grover and having his views not just to settle strategy but because he acknowledged the centrality of Lawyers' Collective/ Naz Foundation to what was being attempted in court. It was a gesture in keeping with the bar's finest traditions of collegial courtesy.

Mr Desai's fastidiousness also meant that after we had taken him through all our material - covering a vast swathe of evolving criminal jurisprudence - he reached for his copy of Russel on Crimes – a legendary if arcane commentary on Criminal Law only the most academic of law practitioners would trouble. This deep dive into criminal jurisprudence had to be finally halted only because, as Mr Desai reminded us, there were more pressing legal questions to be attended to, such as the Code of Civil procedure and the law on impleadment. On those issues, where a lesser Counsel might have rested content in the Supreme Court's relaxation of standing in matters of public interest, Mr Desai did not. He called for a battered, much-thumbed diary/notebook - the kind used only by Senior Counsels and munims of a certain vintage – to pull out citations that our sophisticated web searches had missed.

With that level of preparation, the impleadment hearing itself was a relative shoo-in. After Mr Desai had gently suggested to the Bench in Court 1 of the Delhi High Court the importance of the issue and what Voices would bring to the hearings, our fears of being shut out for having come too late or for duplicating the petitioner's contentions, evaporated. Mr Desai had got us a foot in the door.

It was this foot in the door that would allow Voices at final hearing to place before the High Court sworn affidavits of brave LGBTQI persons testifying to the torture, degradation and humiliation they suffered because of section 377 - Kokila, who was raped by goondas and then raped by the police; Madhumita, who was arrested and framed in a false case because of her sexual and gender identity; Gautam Bhan, whose self and personhood had suffered by the criminalization of his sexuality; a lesbian woman - whose identity had to be anonymized - separated from her partner and returned to her parents; another person whose identity had to be anonymized, subjected to brutal police violence in Delhi. These narratives would weigh with the court in its celebrated 02 July 2009 decision reading down section 377 – Naz Foundation V Union of India And Others.

Before the Supreme Court in 2012, in the challenge to the High Court's Naz Foundation decision (Suresh Koushal v Union of India and Others, SLP (C) No.15436 of 2009), Mr Desai represented filmmaker Shyam Benegal. Counsels who had argued before he did, had already drawn the court's attention to the devastating impact of section 377 on lives and families of LGBTQI, and to its cruel unreasonableness. Yet, the court seemed skeptical about whether 377 targeted a class of people or was class neutral and only prohibited specific acts, and whether, decriminalizing sodomy was appropriately in the realm of Parliament or of the constitutional Court.

Mr Desai's submissions wove a powerful argument around 'fraternity': "we need to look beyond equality and liberty to the question of fraternity – not just as a trinity of rights, but as a union in which one does not work without the other two", he argued, before quoting Dr B.R. Ambedkar - "equality without fraternity is no deeper than a coat of paint". He then introduced the court to India's long tradition of same-sex love, reading chapters from Ruth Vanita and Saleem Kidwai's Same-Sex Love in India, including Vijay Dan Detha's story Dohri Joon (A Double Life) - invoking understanding through literature where logic and reason seemed to be falling short.

When Mr Desai read from the affidavit of Vijaylakshmi Rai Choudhury on what it meant to her to have a gay son, one of the bench commented that he had never met a gay person, but had learnt a lot in the course of the hearing. This came just after the Bench paid tribute to Mr Desai's advocacy - "Mr Desai, what is the secret of your art of persuading the bench without ever raising your pitch? This is an art which is vanishing". It was moments such as this during the 2013 hearings, that gave us the hope of succeeding and that made the loss of that fateful 11.12.13 day, when the Supreme Court overturned the Delhi High Court's Naz Foundation judgement, the more bitter.

When we went back to Mr Desai for the Navtej Johar round (Navtej Singh Johar And Others v Union of India, WP (C) 573 of 2016, a fresh article 32 writ challenging section 377 IPC's constitutionality) in 2018, he was in his mid-80s and no longer a regular in court. As before, however, there was no question of his willingness or his commitment. As before, he was keen to know and to work with the strategies of the other arguing Counsel. And as before, Mr Desai managed to find the time and the energy to ensure not just that his arguments and submissions were carefully honed but to also oversee the presentation of written submissions. The years had not dimmed his fastidiousness or his attention to detail as he gave us detailed instructions not just about the content, placement and form of the submissions but even the colour and thickness of the cover page.

Mr Desai's commitment to his craft and to the court was repaid in full measure by the Bench's regard for him. By the time it was Mr Desai's turn for submissions, several Counsel had argued at length and time allotted to the petitioners - and the bench's patience - was running thin. Mr Desai returned to the theme of "fraternity" and "dignity" he had developed in 2013, this time narrating Dr B.R. Ambedkar's experience of humiliation when he was denied lodgings because of his caste. The Constitution Bench was rapt in attention, beaming down on this Bhishma of the Supreme Court what seemed as much adoration as respect. After Mr Desai concluded and collapsed into his chair exhausted with the effort it was only to be expected that the Constitution Bench's decision reflected, in no small measure, Mr Desai's carefully crafted submissions (especially see para 97 of Nariman J's opinion and para 143 of Chandrachud J's opinion).

In Mr Desai's passing the LGBTQI community lost a champion.

(Lawyers who represented Voices against 377, Parents of LGBTI Persons & Mental Health Professionals in the 377 Litigation)