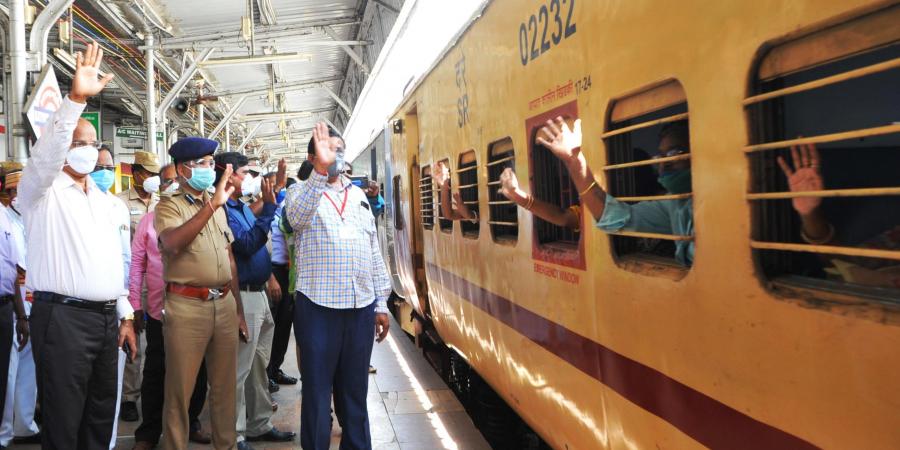 The Karnataka High Court has asked the state to clarify on whether it really wants to take a stand that a migrant worker who has no income and is not in a position to pay Railway fare will not be allowed to travel by Shramik special trains to his home State.

The court sought the clarification from the state by May 21, after government in its written submission said that six shramik trains were arranged till 15th May, 2020 from various States to bring workers from other states back to Karnataka.  The stand specifically taken was that the expenses for travel by shramik trains have been paid fully by the Government of Karnataka. However, the stand taken as regards the migrant workers in the State who want to go back to their States of their origin is that unless the corresponding States to which the migrants wish to travel agree to bear the train fare, the migrant workers will have to pay the train fare.

An argument was canvassed by the petitioner that the State cannot discriminate by creating two artificial classes of migrant workers on the basis of the State of their origin.

Additional Solicitor General appearing for the Union Government, explained to the Court the inter-state arrangements for bearing travel cost of Shramik Trains.

The ASG said : "The state of Madhya Pradesh, Himachal Pradesh, Odisha, Assam, West Bengal, Manipur, Uttarakhand, Nagaland, Tripura etc. have all deposited money in advance with the Government of Karnataka for arrangement of train services for the movement of migrant workers to their respective home states through the designated trains i.e. Shramik special Trains."

In case of migrant workers from other States which have not agreed to pay the train fare of the migrant workers, the State Government will have to pay the fare to the Railways and thereafter, take up the matter with the corresponding States for reimbursement of the amounts, the Centre told the Court.

The Court also noted that the State Government is not willing to accept this stand of the Centre.

In this backdrop, a division bench of Chief Justice Abhay Oka and Justice B V Nagarathna said

"Now, the State wants to create two separate classes of migrant workers who wish to go back to their respective States based on the State of their origin. The State will have to satisfy the Court about the legality of the said stand in the context of the arguments based on Articles 14, 15 and sub-clause (d) of clause (1) of Article 19 of the Constitution of India."

Irrespective of the State of origin, the reasons why the migrant workers are desperate to go back to their respective States are the same, the bench noted.

"The State Government must state before the Court whether it wants to deviate from the stand taken by the Government of India on the issue of bearing the fare of the Railways and whether it really wants to take a stand that a migrant worker who has no income and is not in a position to pay Railway fare will not be allowed to travel by Shramik special trains to his home State."

It added " We must note here that we are dealing with the issue of violation of fundamental right of migrant workers who are unable to approach Writ Court for the reasons which are obvious."

The bench has also called for a broad data regarding the number of migrant workers who wish to go back, along with the data of buses which are made available to migrant workers traveling to the neighbouring States.

The Additional Advocate General for the State  argued that the order of the Apex Court dated 15th May, 2020 concludes the issue and this Court cannot deal with the issue of compelling the State Government to bear the train fare of migrant workers.

The bench also directed the Additional Advocate General to respond on whether the order dated 15th May, 2020 of the apex court will constitute a binding precedent especially when it is alleged before the court that the policy of the State is arbitrary and violates fundamental rights of the migrants.

On May 12, the court had prima facie held that considering the constitutional rights of the migrant workers, no one should be deprived of an opportunity to go back to his own State only for the reason that he has no capacity to pay for the transport.

The court had then asked the Central and State Government to immediately take a decision on the question of paying railway fare of those migrant workers who are wanting to travel back to their states but cannot do so due to their inability to pay.