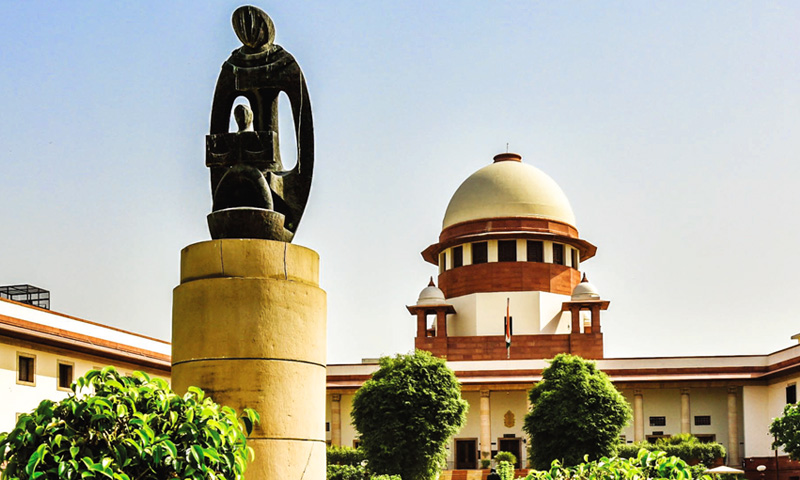 The Supreme Court on Tuesday stayed the order of the Telecom Disputes Settlement Appellate Tribunal(TDSAT) which directed the Union of India to refund the amounts collected from Internet Service Providers as license fee. The bench headed by Justice D. Y. Chandrachud was hearing the Centre's statutory appeal under section 18 of the TRAI Act, 1997 against the 18.10.2019 decision of the...

The Supreme Court on Tuesday stayed the order of the Telecom Disputes Settlement Appellate Tribunal(TDSAT) which directed the Union of India to refund the amounts collected from Internet Service Providers as license fee.

The bench headed by Justice D. Y. Chandrachud was hearing the Centre's statutory appeal under section 18 of the TRAI Act, 1997 against the 18.10.2019 decision of the TDSAT, New Delhi whereby the Tribunal has allowed the petition of the internet service providers and has set aside the license fee demands made by the Department of Telecommunications (DoT) as per the new concept of Adjusted Gross Revenue.

The bench admitted the appeal and listed the same for hearing in the last week of April. The bench also clarified that in the event the appeal succeeds, the ISPs should be prepared to pay the amounts.

"You are not being asked to pay today. But should the UOI succeed in the appeal, there should be provision at your end to make the payment", said Justice Chandrachud to the respondent-service providers.

"Initially, the internet was not the 'in' thing, back in 1998. So incentives in the form of no license fee were offered for people to come and also motivate others to join the sector. Long-term license agreements of 10 to 15 years were entered into. After it became a competitive field, the regime has changed. Now, the people are charged licence fee on the AGR. The old people, though not required to pay any licence fee during the tenure of the agreement, will be granted renewal only with the license fee. The problem is that while the old people continue to not pay, the new people said that there is no level-playing field because they have to pay the license fee. The tribunal, in the impugned order, has said that the government may neither recover license fee from the old ones nor from the new ones", began SG Tushar Mehta.

"This concerns all service providers and needs Your Lordships' examination. If we succeed, the government will be entitled to recover some 4300 odd crores", he pressed.

It may be noted that on 01.05.2014, TRAI submitted its recommendations on definition of AGR in Licence Agreement for provision of Internet Service and minimum presumptive AGR. TRAI has recommended for a uniform licence fee of 8% of the AGR application for all ISP and ISP-IT licences. Revenue for the purpose of licence fee for both these categories shall include all types of revenue from internet services allowing only those deductions available through pass-through charges and taxes/levies as in the case of Access Services, without any set-off for expenses. Revenue from internet services shall also be included in the definition of AGR. It is the common case of the parties that the Government has so far not taken any decision on the above recommendation of TRAI.

It is also not in dispute that later in July, 2014, TRAI issued a Consultation Paper on definition of Revenue Base (AGR) for different types of service licences including for UL ISP Licence and has submitted its recommendations on 06.01.2015 which is also pending.

Senior Advocate Mukul Rohatgi, for the respondent Sify Technologies, advanced that the position of some old licensees is that the revenue from internet service is not to be charged for the purpose of computing the license fee. He pointed out that some of these old licenses will continue till 2028. "There are two recommendations. Six years have passed and the government still has not deliberated on them. After 2028, the old licences can end and all can have a level playing field. Why hasn't the government taken a call for six years?

"If someone is charging Re.1 and we are charging Rs.5, why would anyone come to us?", he asked.

Senior Advocate Arvind Datar, appearing for the Internet Service Providers' Association of India, also advanced that while the May 1, 2014 recommendation is in respect of the old licensees, the January, 2015 recommendation is for the new ones. "If the recommendations are considered, no appeal would even be needed", he said.

"It will still apply prospectively", countered Mr. Mehta. "But you have not decided in the last six years...", pointed out Justice Chandrachud.

"These recommendations are still engaging your attention?", asked Justice Chandrachud. "No. Now there is a new regime", replied the SG.

"Our difficulty before the TDSAT was that the stay was not in favour of the government. If we finally succeed, they cannot say that 'the amount is so high, how can we pass it on to the end consumers'", continued the SG

"You are not being asked to pay today. But should the government succeed, there should be provision at your end to make the payment", said Justice Chandrachud to the respondents.

Mr. Datar argued that it affects their banking and loan capacity, while the SG refuted this claim.

Ultimately, the bench proceeded to list the matter for final hearing in April.

Since 1998, Licenses have been issued under different regimes for the purpose of providing Internet Services, which are categorized as follows:

4. Under the 2013(UL ISP)Guidelines, the license fee is charged at 8% of AGR (including Pure Internet Services)

The Ministry of Communication & Information Technology in a press release on ,15.02.2012, declared introduction of Uniform License fee wherein it was state that, there will be uniform License Fee across all telecom Licenses and service areas which will progressively be made equal to 8% of the Adjusted Gross Revenue (AGR) in two yearly step starting from 2012-13.

In accordance with the press release dated 15.02.2012, the decision with respect to implementation of Uniform Licensee Fee for ISP License was issued by the Appellant, DoT vide Circular NO. 820-01/2006-LR (VOL. II) dated 29.06.2012 wherein Uniform License Fee was imposed on all ISP licensees and Internet Services were included in the provisional definition of AGR of all the ISP Licensees.

The Appellant, DoT, submits that it notified Unified License Regime w.e.f, 19.08.2013 which was not challenged by the present Respondents in the Court of Law.

"That as the Licences of the Respondents No.2 & 3 expired before migration to UL-ISP, they were therefore granted permission to continue providing Internet

Services during the intervening period as per the terms and conditions of ISP License till the grant of Unified Licence subject to completion of formalities for obtaining the Letter of Intent (LOl) within 3 months of expiry of License and subject to payment of License Fee as per the License Fee for ISP Authorisation under Unified License (wherein revenue from pure Internet Services is included in the AGR)", it is averred.

It is stated that the Respondents, being aggrieved by the aforesaid communication, filed the Telecoin Petition No. 169 of 2014 before the TDSAT, under Section 14 of the Telecom Regulatory Authority Act, 1997, challenging the decision of the Appellant, DoT, and that the TDSAT passed the present impugned common Final Judgment and Order dated 18.10.2019 whereby the TDSAT has erroneously allowed the Petition of the present Respondents setting aside the License Fee demands made by the Appellant department on the Respondents as per the new concept of Adjusted Gross Revenue (AGR).

The Centre asserts that the present appeal has been preferred as the TDSAT has grossly erred in not appreciating the following aspects of the case: -

A. That the Tribunal failed to appreciate that, the TRAI had recommended uniform licence fee across all services and licences (including internet service), inter-alia, to eliminate arbitrage between different Licences due to difference in Licence fee/service , areas/definition of AGR vide its recommendations dated 11.05.2010 on 'Spectrum Management and Licensing Framework'. That TRAI has recommended that charges from pure internet service should also be taken into account for calculating the AGR.

B. That, the recommendations of 11.05.2010 of TRAI clearly lay out the reasons for levying the uniform licence- fee on all telecom licences and service area.s. Due to the differential licence fee across different licences, an ample opportunity of arbitrage and leakage of revenue due to the respondent was taking place. That a Unified Access Service / Basic Service Operator / Cellular Mobile Telephone Service (UAS/BSO/CMTS) Licensee can provide Internet services under its respective licence. But several UAS licensees are holding ISP licences also to avoid paying licence fee on internet services / paying reduced licence fee on Internet Telephony service. Thus these licensees avoid paying the Licence fee on internet service, under the UAS Licence thereby depriving Government from its rightful-revenue.

C. That the Tribunal failed to appreciate that, the Unified Licence was finalized after considering TRAI recommendations dated 16.04.2012 on 'Guidelines for Unified Licence/Class Licence and migration of existing Licenses' and response of TRAI dated 12.05.2012 to the back reference made by DoT. Thus the terms and conditions of UL were finalized after receiving TRAI recommendations and response of TRAI to DoT's back reference.

E. That the Tribunal has exceeded its jurisdiction as outlined by this Hon'ble Court in Union of India and Anr, Vs, Association of Unified Telecom Service Providers of India and Ors. reported in (2011)10 see 543 wherein this Hon'ble Court has categorically held that the TDSAT does not have jurisdiction to challenge the validity of the terms and conditions of the License Agreement.

F.That the TDSAT grossly erred in reckoning the impact of the impugned Order. That the impact, will not be restricted to UL-ISP Licenses only and is bound to result into wider ramifications on the entire Unified License Regime.

"Therefore, in the background of the aforementioned contentions the TDSAT cannot construct or impose its own formula or Guidelines for calculating or implementing the License Fees and demands, overriding the clause of the License agreement and terms and conditions proposed and amended by the Appellant department", it is urged.