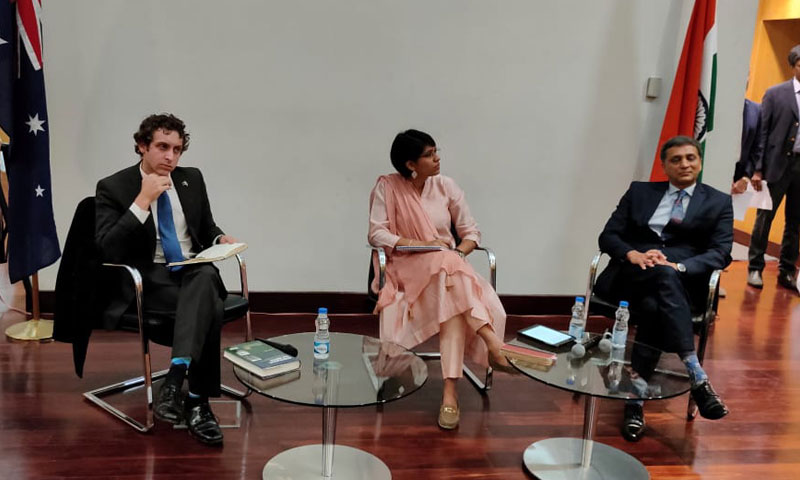 The event commenced with opening remarks by Mr. Vikram Gera, director ANZIBA, who emphasized the shared values of free press, pluralism and governance structures between India and Australia. This was followed by a statement from Mr. Abishek Jebaraj, founding Trustee of Project Constitutionalism, who provided an insight into the objectives of the organization.

With Ms. Prasad as the moderator, the talk began with Prof. Star referring to statements made by Justice Michael Kirby on the lack of awareness both the countries have regarding the legal systems of the other country, despite the existence of common Common Law roots. It is interesting to note at this juncture that, as per a joint study conducted by Indian and Australian professors, out of the total citations of Indian judgements made by Judges of the Australian High Court, 64% of it can be attributed to Justice Kirby.

Prof. Star referred to the similarities between the two legal systems as a consequence of British colonialism: British common law; English as the language used in courts; federal systems; written constitutions; Parliamentary democracy; emphasis on rule of law; tradition of precedents. While Australia's short Constitution came about in the year 1901, India's much longer Constitution came about 50 years later and possessed the opportunity to build upon jurisprudential developments.

The similarities and the bond between the two countries did not end there. Prof. Star remarked that four Indians had been bestowed the highest civilian honour of Australia i.e. Order of Australia: Mother Teresa, lawyer Soli Sorabjee, cricketer Sachin Tendulkar, and recently Biocon founder Dr. Kiran Mazumdar-Shaw. Prof. Star also referred to Sir William Burton, a judge of the Supreme Court of New South Wales, who was later appointed to the Madras High Court.

With regard to the reliance of Indian judgements on Australian jurisprudence, Prof. Star highlighted freedom of trade, commerce and intercourse provisions enshrined Part XIII, Articles 301-307 of the Constitution of India, which had its foundational basis in Section 92 of the Australian Constitution.

Prof. Star also delineated the salient differences between the two Constitutions by referring to the amendability of the same. While the Australian Constitution is harder to amend because of the need of referendum and state votes, Indian Constitution does not require the same rigmarole. Due to this rigidity of the Australian Constitution, it is difficult to introduce new Fundamental Rights, and therefore, Australia can learn from India to guarantee such rights expressly. Currently, provisions such as the separation of powers, right against self-incrimination, right to not be arbitrarily detained and right to due process are merely implied in Australian jurisprudence, while they are expressly guaranteed in India. Australia also has the unswayable right to trial by jury, while India does not. All in all, while there existed multiple similarities, salient differences also existed in the form of amendability and protection of rights.

Senior Advocate Shyam Divan then began with his point of view regarding the comparative analysis of the jurisprudence by citing an event with regard to the Female Genital Mutilation PIL. He said that he had meant to place reliance on a New South Wales trial court decision which had convicted three individuals for engaging in it in 2017. However, the same had been reversed by the Australian Criminal Court of Appeal. Fortunately, this has been reversed again.

Mr. Divan also referred to Justice Kirby as well as Justice Edwin Cameron of the Constitutional Court of South Africa, and their impact on Indian jurisprudence. For instance, decriminalization of homosexuality by the Delhi High Court in 2009 in the Naz Foundation v. Govt. of NCT of Delhi case could have stemmed from the interaction Justice A.P. Shah had with Justice Cameron, who had publicly come out as homosexual and was also HIV positive.

Mr. Divan then elaborated on the importance of the right to property in the development of Australian constitutional law jurisprudence – one of the ways in which it is distinct from the Indian context, where the right to property is not a fundamental right. In India, as he pointed out, it has been Public Interest Litigation (PIL) jurisprudence predicated on the right to life under Article 21, that has been one of the most significant drivers of the evolution in our conception of rights and the Constitution. This portrays more of a parallel with South African constitutional law, where the right to dignity has played a major role, as Justice Cameron informed Mr. Divan.

Mr. Divan also discussed the method in which PILs have become a way for the Indian Supreme Court to try and atone for their betrayal of the citizenry's trust during the Emergency. According to him, "most courts secure their legitimacy with the reasoning of their judgments and the manner they convey this to the people," but through PILs, the apex court has "opened up a channel where it draws support and connects with the people."

Mr. Divan concluded his opening remarks by addressing a pertinent question for the modern age: how will the Constitution be affected by the internet age? Referring to Edward Snowden's 2019 autobiography 'Permanent Record', he argued that liberty in the 21st century was intrinsically linked to privacy. Despite the challenges this creates – something he that he was well aware of as the lead counsel on the Right to Privacy case – he noted that in the 1940s, there was pervasive illiteracy in India and yet we were able to draft our Constitution, the enumerated rights of which served as checks on the bureaucracy, ensuring that for every case which had to go to the constitutional courts, there were several which did not.

Ms. Prasad then posed the question regarding the federal structures in the two countries.

In response to this query, Prof. Star explained that the Australian experience had been one of centralization, particularly in relation to rights; there existed a fair degree of connection to the United Kingdom as Australia is a constitutional monarchy, with Queen Elizabeth II acting as the Head of the State. In fact, till 1986, the provision to appeal to the Privy Council still existed.

Mr. Divan, per contra, talked about how the Centre has the power to alter boundaries of states through ordinary laws, thereby demonstrating a strong centralizing tendency in India. "Do we divide or create these states along linguistic lines? In terms of structure, we are not anywhere close to a strong federal structure. Smaller states are better when it comes to sheer efficiency and administration. However, if the states are too small, they may amount to fiefdoms."

The different approach to the protection of civil liberties in both countries was highlighted by the fact that Australia doesn't have a Bill of Rights in its Constitution. In response to a question by Ms. Prasad regarding the representative nature of legislative processes, Prof. Star stated that most Australians were content with the manner in which rights were addressed by the legislature, with many even believing that they had an express Bill of Rights. Unfortunately, this has led to problems for the minorities there, who have not been able to utilize the protection that such an express document would offer. For instance, mandatory detention laws instituted in the year 1992 (and subsequently amended in 1994) allow for an undefined period of detention of asylum seekers, without any scope for judicial review.

Mr. Divan noted that despite the Fundamental Rights chapter, India has had a slow process of statutory implementation and protection of certain rights like the right to information, the right to food, and more recently, in the realm of data protection. He also noted that one of the pitfalls of the PIL system was that, by allowing the courts to step in to fix gaps in this jurisprudence, it weakened the statutory protection of human rights. "We do not have to work as hard as we had to or to lobby hard enough to bring about a law. Additionally, unless the Executive is backing a statute, it is hard to bring about a law."

On the pressing issue of climate change, which has become controversial in Australia because of the government's refusal to accept it as a genuine problem (despite the recent catastrophic bushfires), Professor Star lamented the lack of political will, which he believes is the appropriate forum to deal with the problem. At the same time, he noted that there have been some recent progressive judgments by the land and environmental courts, particularly with regard to the rights of indigenous people.

ADDITIONAL QUESTIONS FROM THE AUDIENCE

A brief audience interaction followed, wherein Mr. Divan was asked about executive interference in the functioning of the Supreme Court and whether it remained an independent institution. Despite acknowledging the fact that the court faced a significant challenge, he was of the opinion that the Supreme Court of India, unlike apex courts elsewhere, has the opportunity to self-correct even if it got things wrong, as a result of the large volume of cases that came before it.

However, he also noted that the functioning of the Supreme Court in recent times has been patchy. "When governments are strong, courts are weak when it comes to exercising judicial review."

Prof. Star was then asked about how Australian law interacted with international law, and whether this was different from India's dualist approach to this. Prof. Star pointed out that several international rights conventions have been applied in Australia without the enactment of express laws. Mr. Divan pointed out that although India had a dualist system, Indian courts have traditionally looked at and given effect to key international obligations if there was no law to the contrary, or if there is no law at all – the most significant example of which is the case of Vishaka & Ors. V. State of Rajasthan on sexual harassment at the workplace which led to the birth of procedural guidelines by the name of Vishaka Guidelines.

On that note, the enlightening discussion conducted by Project Constitutionalism on comparative analysis of constitutional law in Australia and India ended.