Borrower Must Be Heard Before Account Is Classified As Fraud: Telangana High Court Reads Principles Of Natural Justice Into RBI Master Circular On Fraud Accounts 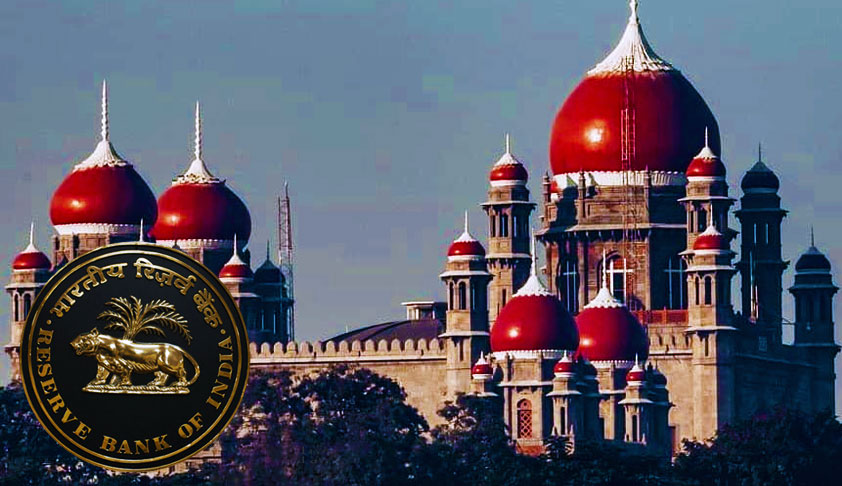 The Telangana High Court has held that the principles of natural justice have to be read into the Master Circular issued by the Reserve Bank of India on the classification of bank accounts as fraud accounts.A division bench comprising Chief Justice Raghvendra Singh Chouhan and B Vijaysen Reddy held that the account holder must be heard before declaring her as a "fraudulent borrower" or as...

The Telangana High Court has held that the principles of natural justice have to be read into the Master Circular issued by the Reserve Bank of India on the classification of bank accounts as fraud accounts.

A division bench comprising Chief Justice Raghvendra Singh Chouhan and B Vijaysen Reddy held that the account holder must be heard before declaring her as a "fraudulent borrower" or as a "holder of fraudulent account" as per the RBI circular.

"..principles of audi alteram partem, howsoever short, have to be applied before declaring a party as 'a fraudulent borrower', or as 'a holder of fraudulent account'", the bench observed in the judgment passed in the case Rajesh Agarwal vs RBI and others.

"The principles of natural justice, especially the principles of audi alteram partem would have to be read into Clauses 8.9.4 and 8.9.5 of the Master Circular," the Court said.

The Court noted that the circular was issued by the RBI invoking powers under Section 35A of the Banking Regulation Act and therefore had statutory force.

The petitioner, Rajesh Agarwal, Managing Director of a company named BS Limited, had challenged the decision to classify the account of his company as "fraud" in 2019 by the State Bank of India's Fraud Identification Committee (FIC) and the Joint Lender's Forum (JLF).

The Court rejected the argument of the RBI that applying principles of natural justice will defeat the requirement of urgency.

"A holistic analysis of the Master Circular clearly reveals that although it is important to report the discovery of a fraud to the RBI, although it is essential to initiate the criminal investigation within a short period, but nonetheless, a sufficient 'warning signal system' is built into the system, so as to alert not only the banks forming the Consortium, not only the RBI, but also the other banks. Therefore, the argument raised by Mr. B. S. Prasad, and Mr. B. Nalin Kumar that, unless urgency is shown in declaring a borrower as a fraudulent borrower, the entire banking organization may be exposed to further fraud by a borrower, is bereft of any merit. For, firstly, there is an inbuilt system for early detection and reporting of possible fraud. There is a system for checks / investigations during the different stages of loan life cycle - beginning with the pre-sanction, disbursement and annual review. Secondly, once a suspicion arises that there is some fraudulent activity, early warning signals can be triggered off putting the rest of the banks on high alert, while dealing with an alleged fraudulent borrower. Thirdly, an account can be declared as RFA by the Fraud Monitoring Group. Therefore, a complete safety system has been prescribed by the Master Circular. Hence, the contention that urgency demands that principles of natural justice should not be read into the Master Circular, is a fallacious contention".

The Court observed thateven an administrative functionary / body, like the JLF, would have to balance the twin aspects of 'hurry' and 'hearing'. Instead of having an elaborate hearing  proceeding, the proceeding can be short but substantive, prompt but effective.

"Undoubtedly, the JLF needs to form an opinion whether the borrower is playing fraud on the bank or not? Obviously, evidence needs to be placed before the JLF for it to formulate its opinion. Therefore, the evidence to be read against a party needs to be furnished to the party. The party has to be given an opportunity to explain, or to challenge the evidence. Thus, the argument of urgency cannot be accepted for jettisoning the applicability of principles of natural justice", the bench observed.

If the requirement of principle of nature justiceis not read into the Master Circular, it would suffer from vagueness.

In this regard, the Court noted that the clauses in the Master Circular regarding declaration of a borrower as "wilful defaulter" contemplate giving opportunity of hearing. However, the same opportunity is not provided in the clauses relating to declaration of fraudulent account. This, the court observed, was a "self-contradiction" in the circular.

The Court also took into account the grave civil and criminal consequences which follow a declaration of a borrower as fraudulent.

"Thus, once branded as 'a fraudster', or 'a fraudulent borrower', or 'holder of a fraud account', the stigma will continue for a considerable time. Needless to say, such a stigma would prevent the Promoter / Director from establishing any other enterprise, or project, or business. Such a stigma would, thus, adversely affect the fundamental rights of a Promoter / Director to carry on a trade or a business, which is guaranteed under Article 19( l)(g) of the Constitution of India. Therefore, such a classification would have "grave civil consequences" for Promoter / Director of a borrowing Company", the Court said.

"The classification of an account as 'fraud' has devastating impact on the life of a person. Yet, Clauses 8.9.4 and 8.9.5 of the Master Circular, which deal with the decision-making process of a JLF, which deal with the declaration of an entity or a person as a holder of a fraudulent account, is absolutely silent about giving an opportunity of hearing to the adversely affected party. Thus, considering the grave consequences of the decision, considering the grave impact on the fundamental rights of the Directors, the principles of natural justice must be read into the said Clauses"

The Court also held that to save the clauses being struck down as violative of Article 21 of the Constitution, it was necessary to read the principles of natural justice into them.

"Further, since the right to livelihood is part and parcel of fundamental right to life under Art. 21 of the Constitution of India, the fundamental right can be deprived only by a reasonable procedure established by law. However, to deny the said fundamental right without giving an opportunity of hearing would be highly unreasonable, unfair and unjust. Thus, the Master Circular, as interpreted by the RBI, would be in violation of Article 21 of the Constitution of India. Therefore, to save Clauses 8.9_.4 and 8.9.5 of the Master Circular from being declared as unconstitutional, it is essential to read the principle of natural justice into the said Clauses"

On Principles of Natural Justice

The judgment also contains an elaborate discussion on the principles of natural justice.

"The principles of natural justice are like a clear sunshine which pervade and permeate into the deepest dark corners, and kill the germs of injustice. The principles of natural justice rein in arbitrary, discriminatory and irrational decisions. They protect an individual from the might of the State, or its instrumentalities. They provide a succor to the common man; they assure the common man that justice not only appears to be done, but is being done to his/her cause. By assuring the people that justice has, indeed, been done, the principles of natural justice restore and strengthen the faith and belief of the people in the rule of law. Not only the three branches of the State, but the State itself rests and progresses on the faith of its people. For, when the faith of the people is shaken, the people may demolish the very foundation of the State", the order said.