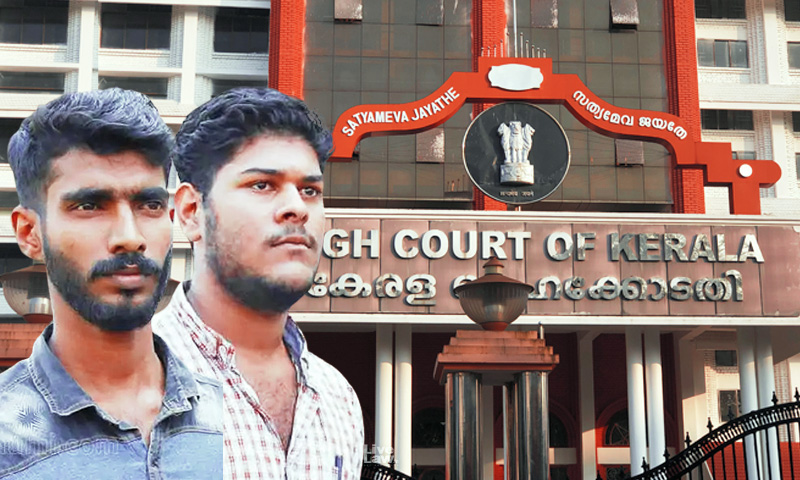 The Kerala High Court on Monday set aside the order passed by by Special NIA Court Kochi granting bail to Thwaha Fasal in a UAPA case for alleged Maoist links.The High Court however has not cancelled the bail granted to Allan Shuhaib, who was also arrested along with Thwaha in November 2019.A division bench comprising Justices A Hariprasad and K Haripal allowed the appeal filed by the...

The Kerala High Court on Monday set aside the order passed by by Special NIA Court Kochi granting bail to Thwaha Fasal in a UAPA case for alleged Maoist links.

The High Court however has not cancelled the bail granted to Allan Shuhaib, who was also arrested along with Thwaha in November 2019.

A division bench comprising Justices A Hariprasad and K Haripal allowed the appeal filed by the National Investigation Agency against the September 9 order passed by Special NIA Court, Kochi, granting bail to Thwaha, student of journalism. The High Court said that it was not interfering with the bail granting to Allan Shuhaib at the moment, considering his young age and also his psychiatric issues. The Court also observed that the materials seized from Allan were less "serious" when compared to those seized from Thwaha. The Court also placed particular emphasis on the allegation that Thwaha had uttered pro-Maoist slogans, which the court termed "blameworthy".

The High Court has directed Thwaha to surrender before the trial court. The HC has also given a direction to the NIA Court to complete the trial within one year.

"While considering the question whether there is prima facie material to infer commission of offence under Sections 38 and 39 of the Act, the court should have confined to the area of enquiry instead of going haywire.We have no doubt that rights and personal liberty are sacrosanct. Courts are bound to protect it. At the same time, individual rights should subserve the national interest. When individual rights are pitted against national interest and security, the latter should prevail", the judgment authored by Justice K Haripal observed.

The HC observed that the trial court went into a "thread-bare analysis" of the documents on record as if in a trial'. Reference was made to the SC decision in NIA v Zafoor Ahmed Shah Watali which held that the totality of the materials should be looked into for the purpose of bail consideration under Section 43D(5).

The High Court observed that the documents seized from the accused were "highly inflammable and volatile".

"After rushing through the materials we are only to say that, generally speaking,some of those materials are not innocent and innocuous which could be ignored in a light-hearted manner", the HC said.

The bench observed that the prosecution had no case that the accused were members of terrorist organization and that the case against them was that they were supporting the banned outfit.

"A terrorist act and acts which further the activities,by promoting and assisting activities of such terrorist organisation by persons who associate themselves or profess to be associated have to be seen differently. Separate provisions have been incorporated in the statute to meet such contingencies", the HC remarked.

The High Court did not accept the argument that the accused were keeping such books and records out of their intellectual curiosity.

"The respondents had carried numerous writings and literature published by the said organisation or by those who have strong allegiance to the outfit. That means, the contention that the respondents had carried such materials out of their youthful inquisitiveness and quest for understanding new ideologies and curiosity does not carry any weight. If they, as youngsters were interested in understanding and assimilating new and novel ideologies, a bunch of materials published by a particular outfit alonewould not have been found in their possession and power. The underlying element of mens rea cannot be overlooked. Therefore, this circumstance alone is sufficient to say, at least at this stage, that they are protagonists of the organisation".

"It is seen that they consider the administrative set up of the Government and the police as their foes.The strategies adopted by them to further the activities of the outfit are vividly given in the guidelines regarding the movements of the activists,how meetings should be convened, guidelines regarding use of electronic gadgets, use of internet, computer, social media etc., and how precautionsare to be taken. This document also envisages two types of comraderie-'parasya sakhakkal' and 'rahasya sakhakkal' that is, comrades working overtly and covertly. By no stretch of imagination it could be thought that such types of documents were carried by the respondents out of mere curiosity or intellectual pursuit of new ideologies", the HC added.

The HC said that 15 copies of the literature were found in the possession of the second accused(Thwaha). It is a very strong circumstance capable of drawing adverse inference against the respondents to say that such items were carried with clear intention, for the purpose of circulation, the HC said.

The HC observed that subsequent conduct of the second accused also should have been taken serious note of by the trial court.

"It is the specific allegation of the prosecution that after having arrested and taken to his residence for conducting a search, the second accused was shouting slogans in support of the CPI(Maoist). This conduct is relevant for the present purpose".

The trial court had observed that the documents seized from the accused were relating to protests against the repeal of the special status of J&K. Differing from this view, the HC remarked :

"The second accused faces offence under Section 13 of the Act also for having carried two banners seeking independence of Jammu &Kashmir. Documents carried by the respondents depict Jammu &Kashmir as a neighbouring country. We are unable to approve the argument of the learned counsel that this has to be viewed in the light ofthe protests emerged against the amendment of the Constitution which conferred status of Union Territory on Jammu & Kashmir. In our view,the said documents carry the seeds of a secessionist ideology and the very Act is intended to compact such activities", the HC said.

Arrested in November 2019
They were arrested by the Kerala police in November 2019 under the Unlawful Activities Prevention Act alleging that they were supporting proscribed Maoist groups, which have been declared as terrorist organizations. The NIA took over the case later.

The national agency cited books, pamphlets, placards, diary notes etc seized from the accused to allege that they were supporters of Maoist ideology. Offences under Sections 38 and 39 of the UAPA which deal with association with a terrorist organization and supporting it with the intention to further its activities, Section 13 of the UAPA (punishment for unlawful activity) and 120B of the Indian Penal Code (criminal conspiracy) were invoked against them.

"Right to protest is a constitutionally guaranteed right. It is well settled that "Government established by law" has to be distinguished from persons for the time being engaged in carrying on the administration. A protest against policies and decisions of the government, even if it is wrong a wrong cause, cannot be termed as sedition or an intentional act to support cession or secession", the court observed.

The Court further noted the mere possession of books on Communist ideology, Maoism, class struggle, etc., does not prove anything adverse against the accused.

The Court also particularly noted that the NIA dropped Section 20 of UAPA(which relates to membership of banned organization) from the chargesheet. So, the Court said that even the NIA does not have a case that the accused are members of Maoist organizations.

Young age of the accused weighed with the Special Court
Special Judge observed that the accused were youngsters with certain rebellious ideas. But their ideas and thoughts have not led to any incitement of violence.
"Here the petitioners are budding youngsters. At the time of arrest, the first accused was just 19 years old. The second accused was 23 yeras of age. The first accused was a student of law. The second accused was a student of journalism. It appears that they used to be pro-active on each and every contentious social and political issues. Such persons are more prone to extremist ideologies and probably that may be the reason for the petitioners to come in contact with banned organizations. Therefore to some extent the court has to be lenient to them on the question of granting bail , but with a clear message that the chance given for reformation shall not be mistook as an opportunity to fasten their bond with banned terrorist organization and to be part of it. One cannot have recourse to violent methods to overawe democratically elected government or legally formed Governmental Machinery, even though people are being tempted to have recourse to such things. Let us hope that the parents of the petitioners would play a constructive role in the betterment of the mental and psychological qualities of the petitioners", the NIA Court had observed.

Overall, the Court said that the evidence on record, at best, suggested that the accused had "leanings" towards Maoist ideology, but they did not indicate any culpability for promoting or facilitating terrorist activities.