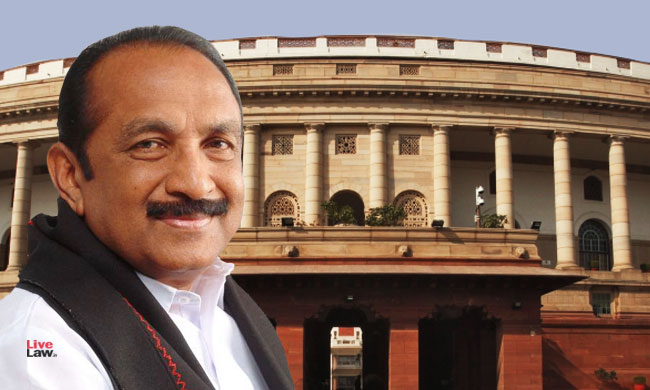 Unlike a typical federation, India has a strong centre, contributing to its Quasi-Federal structure. On Friday, MDMK leader Vaiko moved a resolution in the Rajya Sabha, seeking necessary measures for greater autonomy of states, including amendments to the Constitution to bring back the subjects which were transferred from the State List to the Concurrent List, during the...

Unlike a typical federation, India has a strong centre, contributing to its Quasi-Federal structure. On Friday, MDMK leader Vaiko moved a resolution in the Rajya Sabha, seeking necessary measures for greater autonomy of states, including amendments to the Constitution to bring back the subjects which were transferred from the State List to the Concurrent List, during the last 70 years.

While introducing the Resolution, Vaiko stressed that the core objective of his political party was promoting Federalism. "The Cardinal principle of my party, MDMK is decentralization- giving more powers to the State," he said.

He said that the Constitution had been amended as many as 103 times, and not always for good. He said that the Indian Constitution had been moulded to suit the whims and fancies of the Centre, in complete disregard to the federal structure of the country. Condemning the transfer of four essential powers from the State List to the Concurrent List during the subsistence of emergency in 1976, he said,

"Some important subjects have been transferred over the years from the State List thereby diluting and diverting the States' powers…When we were languishing in the dark dungeon cells of emergency, education was easily swallowed by the Centre. Education went to the concurrent list; now it has become more or less a part of union list. Only for namesake it is in the concurrent list."

The Constitution (Forty-second Amendment) Bill, 1976 transferred four important subjects to the Concurrent List from State List. They are :  (a) education, (b) forests, (c) population control, and (d) administration of justice; constitution and organization of all courts except the Supreme Court and the high courts.

Vaiko remarked that the Centre had seized powers that were germane for proper management of states and left them with items that were "ridiculous". He cited the words of Dr. BR Ambedkar, who said on the last day of the Constituent Assembly,

On the strength of these words, Vaiko stressed that decentralization of power was essential to preserve the Federal structure of the country. Thus, he sought that the residuary powers be vested in the State, along with transfer of ten powers that were contained in the Concurrent List, to the State List.

These Entries read as under:

Entry 6: Transfer of property other than agricultural land; registration of deeds and documents

Entry 25: Education, including technical education, medical education and universities, subject to the provisions of entries 63, 64, 65 and 66 of List I; vocational and technical training of labour

Entry 30: Vital statistics including registration of births and deaths

Entry 31: Ports other than those declared by or under law made by Parliament or existing law to be major ports

Entry 40: Archaeological sites and remains other than those declared by or under law made by Parliament to be of national importance.

Entry 41: Custody, management and disposal of property (including agricultural land) declared by law to be evacuee property.

Entry 42: Acquisition and requisitioning of property

Entry 44: Stamp duties other than duties or fees collected by means of judicial stamps, but not including rates of stamp duty

The common voice among the supporters of the Bill was that federalism is important for preservation of national unity. "An ideal Centre is one which gives greater powers to the states and retains just sufficient powers to itself for preservation of sovereignty and integrity," AIADMK MP Vijila Sathyananth said.

Further, it was argued that since the States dealt with the citizens closely, they were placed in a better position to deal with matters which directly affected the citizens. For instance, the subject of education was raised. It was stressed that education touched upon every person, family and institution and thus, any reform in the education system should be handled with great sensitivity, which could only be done by the States.

"Important and sensitive subjects which have a bearing on the people of the country should be left to the States alone to decide in respect of its policy and implementation, since the State is nearer to the people than the Centre," Vaiko said.

The members also cited the reports presented by the Sarkaria Commission on Centre-State Relations which clearly observed that there was a pervasive trend towards greater centralization of powers and narrow personal interests were given priority over larger national interests.

Reference was also made to recommendations proposed by the Rajmannar Committee, set up by the Tamil Nadu Government in 1971, which had recommended immediate changes in the Constitution to establish a "truly federal" set up with full state autonomy.

"There is an urgency to examine and consider all the recommendations of the various Review Commissions submitted in the past, on the working of the Constitution for implementation… there is an urgent need to improve harmonious development of the Centre-State relationship and to empower the States with more self-sufficient, autonomous and financial power," Vaiko said.

Stating that decentralization was also important from the standpoint of preservation "pluralistic population" of India, in terms of its cultural and linguistic diversity, he remarked,

"India being a multi-region and multi-linguistic nation with people of different hues and colours, decentralization is the need of the hour…Accumulating all the powers at the Centre will lead to Balkanization which happened in Yugoslavia and Soviet Russia."

Interestingly, Vaiko also mentioned the recent political crisis in Maharashta and said that the position of governor should be "abolished". He remarked that the political events in the country clearly showed that the Governors were used as pawns by the Centre, to control the political arrangement of the States, in absolute contrast to the recommendations made by the report of the Sarkaria Commission, which read as under,

"Governor of the state should not consider himself as an agent of the centre but play his role as the constitutional head of the State. The governor as a last resort before recommending president's rule should explore all possible avenues open to him."

The Bill also sought that the States be empowered financially, by allocation of more finances. It was common consensus among the supporters of the Bill that the Centre exercised excessive discretion in allocation of resources, resulting in insufficient funds for fulfillment of its responsibilities.

The Bill was strongly resisted by Congress MP Jairam Ramesh, among other members, who said,

"Undoubtedly, the 42nd amendment was made during the emergency. However, the 44th amendment came to the house when there was no emergency and the govt. went back on certain amendments that were part of the 42nd amendment. However, on four items, the entire house was united in Rajya Sabha and Lok Sabha. Those four items were forests, education, population and administration of justice. There has been a national consensus on this issue."

He said that it was essential that the Concurrent List is not meddled with since the subjects contained therein were of national importance. Talking about the four subjects that were transferred during the reign of emergency, he said,

"Who can say population is not a national concern? The centre must have a role in population planning. It was done deliberately so that Central government can have a greater role in management of forests, education, population and administration of justice…after education has come on Concurrent list, the funding for education has increased astronomically. After forests have come on the Concurrent list, we've had the Forest Conservation Act. After Population has come on concurrent list, population planning has taken place and in fact, many states of the country, barring 6 have already reached replacement levels of population. So bringing them on the concurrent list has had beneficial effect on States, which have seen public expenditure on these areas increased."

Advocating for a Strong Centre, he said that strong centre did not mean execution of diversity but rather that the central government plays a "pivotal role" in raising and distributing resources equitably among the states.

Ramesh also said that the Finance Commission was one of the greatest successes of the Constitution, which very responsibly allocated funds to the States. In this regard, BJP MP Shiv Shukla said that the fiscal powers of the States had been increased in essence, given that the government had raised the share of States in Union taxes to 42% from earlier 32%. He also said that his government was a radical supporter of "cooperative federalism", and had established the NITI Aayog for fostering the involvement of State Governments in the economic policy-making process.

[The earlier report had incorrectly mentioned the 'resolution' as a 'private member bill'. The mistake has been corrected since]