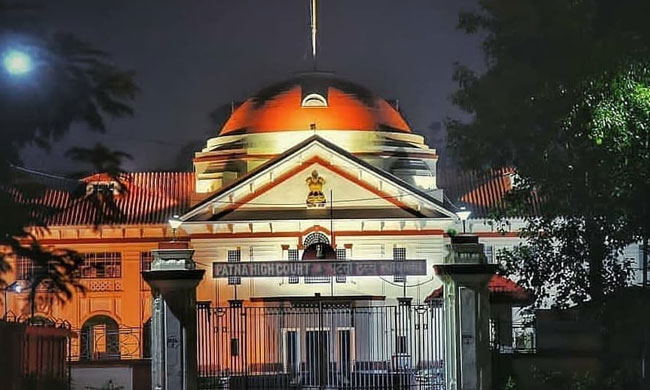 x
"Hindi can be accepted as an elective language for preferring such petitions, but with the caveat that along with the Hindi version, authoritative English translation shall also be provided."

A full bench of Patna High Court has held that writ petitions or a Tax Reference can be filed in Hindi but it will have to be accompanied by an authentic English version of the petition. The 1972 Notification A notification issued by the Government in 1972 authorised the alternative use of Hindi language in the High Court (1) for arguments in civil and criminal cases before Patna...

A full bench of Patna High Court has held that writ petitions or a Tax Reference can be filed in Hindi but it will have to be accompanied by an authentic English version of the petition.

A notification issued by the Government in 1972 authorised the alternative use of Hindi language in the High Court (1) for arguments in civil and criminal cases before Patna High Court and (2) for submitting application with affidavits. The notification put a rider that English shall continue to be used for applications submitted under Article 226 & 227 of the Constitution of India as an exception. Similarly, application connected with the tax reference shall continue to be submitted in English as well.

While considering a writ petition drafted in Hindu, seeking an issuance of a writ of habeas corpus challenging a detention order, the division bench came across a judgment by a coordinate bench.

In Binay Kumar Singh vs. Bihar State Electricity Board, a division bench, interpreting this notification held that there is no prohibition in the institution of an application under Article 226 and 227 of the Constitution of India in Hindi.

The division bench doubted the correctness of this judgment and held that the notification of 1972 specifically carved out an exception with regard to writ petitions. The matter was then referred to full bench.

Chief Justice Sahi held that, as long as the notification remains unchanged, writ petitions or Tax Reference can be filed in Hindi but it will have to be accompanied by an authentic English version of the petition.

Law Is Taught In English, English Convenient For Lawyers, Law Journals/Texts In English

The Chief Justice justified his view by giving two reasons. He noted that Bar Council of India Rules provides exclusively for the medium of instruction to be English in respect of courses taught in Law Schools.

"This therefore clearly lays the foundation that the English language is being primarily used for training legal brains not only because of its historical past but also because of the global impact of the language of English in today's context when laws from all over the world are being referred to in courses of study including International Law, Commercial Law and the like the translation of this massive global information into Hindi Devnagari Script may not be possible in the near future nor such effective translation is available to the extent it is required for training legal minds in Hindi Devnagari Script. The existence of legislations in English, documents of contract, service rules, laws relating to personal life, liberty and employment, laws relating to environment and the like and a large field of curriculum cannot be translated overnight with exactitude for the use in educational institutions or even in Courts of law. This therefore will have a direct bearing on the drafting of pleadings particularly in writ petitions which find heavy institution in all High Courts. This prescription of medium of instruction in Hindi (English?) therefore appears to have been carefully introduced in the Bar Council of India Rules which cannot be ignored while championing the cause of Hindi which definitely one of the constitutional aspirations to be fulfilled."

The other reason given by the Chief Justice read thus:

"The second reason is that our country has diverse languages and Lawyers in today's context travel far and wide to address Courts and assist them to arrive at a correct conclusion which is necessarily a display of expression today in common in the English language. They can therefore also plead and present petitions in the English language more conveniently to express the concern of the litigants. The possibility of litigant getting involved in a case in State where the language is entirely different would therefore make it different not only for the litigant but also for the Lawyer and the Court. In the event an over emphasis is led on the use of Hindi language while transcripting petitions but at the same time if petitions are filed in Hindi Devnagari Script and may have to be dealt by Court which may require a translation thereof then to that extent a provision can be made that in the event a petition or tax references is presented in Hindi then could be accompanied by an authoritative text of the same in English language as that would be the officially recognized language as per the Notification dated 9th May, 1972."

The court also noted that law journals, authoritative texts in all branches of law are available in English.

"The best law journals in India that have been published in the past and present are all in English. The authoritative text on almost every branch of law by authors of repute and scholars of jurisprudence are all in English. It will not be possible for this Court to predict as to when and how this entire material will get translated into Hindi Devnagari Script for its utilization and understanding by those who are espousing cause of the introduction of the Hindi language in the pleadings which are normally and to a great extent drafted by Lawyers and legal experts, and not by individuals. At the moment, the huge source of law in the shape of precedents is also one of the areas of concern as this forms a substantial basis of both legal education and continuing legal education."