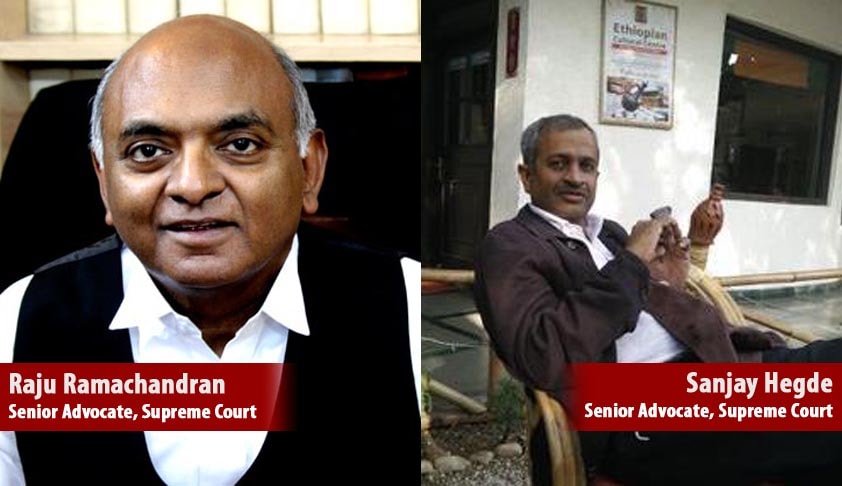 Four days after it began hearing the appeals filed by four death row convicts in the sensational Nirbhaya gang rape and murder case, the Supreme Court in a surprising move today appointed two senior lawyers- Raju Ramachandran and Sanjay Hegde- to represent them to ensure that there were no “inadequacies” and the convicts are ensured a "full and fair" hearing

“Considering the gravity of the case and the questions of law involved, we deem it fit to appoint the senior lawyers to assist the court”, said three -judge Bench comprising Justices Dipak Misra, V Gopala Gowda and Kurian Joseph.

While advocate Raju Ramachandran will represent convicts Mukesh and Pawan, another known lawyer Sanjay Hegde will argue for Vinay and Akshay.

The bench hinted that the exercise of appointing seniors was to ensure that all the convicts got a proper hearing as there were “inadequacies” till now.

M L Sharma and A K Singh, the lawyers who had represented the convicts in the lower court and High Court vehemently protested saying the seniors shall argue only after they argued as they had been representing all accused from beginning”.

But putting his foot down, Justice Misra told them “you cannot stop us from appointing any amicus”.

The Supreme Court had on April 4 finally begun hearing the appeals after keeping it on cold storage for more than two years.

“We have tremendous faith in their abilities. They are also claim they are capable but the whole purpose is to lay down all propositions in this case which the court has not got in its prism”, Justice Misra told Ramachandran.

As per procedure, the apex court also needs to confirm the capital punishment and only then the four convicts can be hanged. The juvenile convict has already walked free after serving three years at a juvenile home while another accused - Mukesh's brother Ram Singh - committed suicide inside Tihar Jail during the trial.

The incident, which sparked worldwide condemnation and spurred major changes in Indian laws took place on a private bus which the victim had boarded along with a male friend on the night of December 16, 2012. They were on their way back home after watching the evening show of Life of Pi at a Saket mall theatre. The accused brutally gang-raped the physiotherapy student, beat up her friend and dumped them from the moving bus. The victim died 13 days later at a hospital in Singapore.