NJAC and The Tragedy of the Library of Alexadria 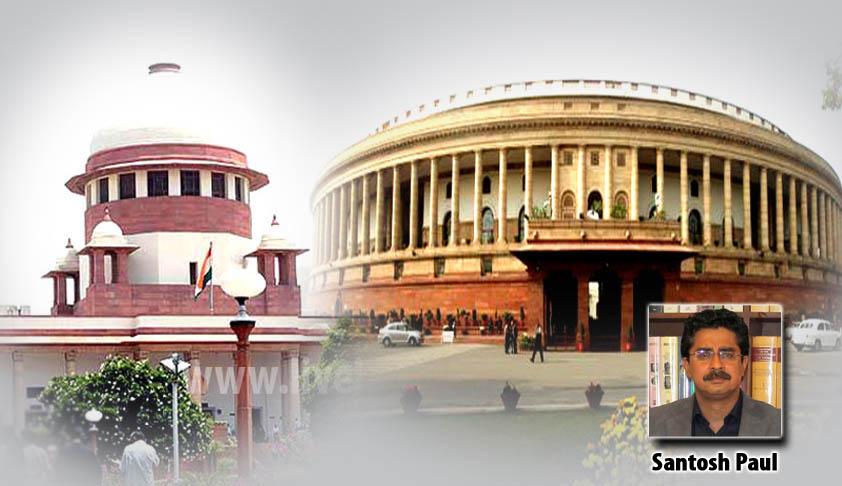 The Royal Library of Alexandria was founded by the Greek general Ptolomy II, the successor to Alexander the Great. Built in the 3rd century BC, it was the  centre of learning of the classical world. It had a precious collection of 5,00,000 papyrus scrolls of world's greatest and foremost thinkers, astronomers, philosophers, mathematicians, litterateurs, scientists like Homer, Plato,...

The Royal Library of Alexandria was founded by the Greek general Ptolomy II, the successor to Alexander the Great. Built in the 3rd century BC, it was the  centre of learning of the classical world. It had a precious collection of 5,00,000 papyrus scrolls of world's greatest and foremost thinkers, astronomers, philosophers, mathematicians, litterateurs, scientists like Homer, Plato, Socrates, Euclid, Archimedes, Eratosthenes, Erasistratus, Hipparchus, Aedesia,  Theon, Hypatia and Aristarchus of Samos.

If legend is to be believed the hunger of Ptolemy III for knowledge was so great that he decreed that all ships docking at the port should surrender their manuscripts to the authorities. Copies were made by official scribes, originals delivered to the original owners and the copies thereafter filed away in the Library.

The library of Alexandria suffered the misfortune of being  burnt to cinders destroying the most complete collection of ancient literature and science ever assembled. It has been a source of intense debate as to who was the culprit to this destruction. Guilt has been  attributed to Julius Caesar (47 BC), Emperor Aurealian, the Coptic pope Theophilius (391 AD) and even to a much later Islamic Invasion by Caliph Omar (495 AD).

But the question which vexes most is why did the liberal populace of Alexandria not protect the library from destruction? Why did the people not prevent the vandals, whoever they were, from entering, burning and  destroying the library? The most plausible explanation  is perhaps that the people felt that the library did not affect their lives and would not impact them in any manner. Little did they realize that their very lives and those of mankind were being transformed by science, mathematics astronomy the literature progressing under the portals of this mighty  library. Had the library remained perhaps Europe may not even have to see the dark ages.

The destruction of the collegium system of appointments is akin to the destruction of  fantastic library of Alexandria. The sudden, abrupt and swift notification of the NJAC as the eminent counsel Fali Nariman put it, "may not be illegal but highly improper", when its very constitutionality was under challenge on the ground of  a serious erosion of judicial independence. However, like the inhabitants of Alexandria, it is evoking little reaction from the general mass of people or the legal fraternity. Somehow an impression exists that it does not matter what system of appointments is put in  place. Have the people forgotten the spectacular development and expansion of fundamental rights, the near permanence and guarantee of a free society expounded in Keshavanda Bharati? Have the people forgotten the head on assault on high crimes be it the coalgate, the 2 G spectrum scam, the oligarchy of corruption in cricket, the relentless pursuit of a magnate defrauding multitudes of their life earnings, coming to the rescue of a resident hounded by the big business in the imaging business, striking down of the ominous and nebulous 66A or the protection of a "five star activist" and the freedom to travel and free speech of a development activist  from political vendetta.

Or is the same sentiment of Alexandria prevailing here as Mathew Battles appropriately puts that the library was  "moldering slowly through the centuries as people grew indifferent and even hostile to their contents."

It not that the collegium system was or is  perfect or that it did or does not need serious restructuring. But the notification of the NJAC has in one stroke demolished the very edifice of judicial independence viz. "to remove political bias from the very inception of appointments" which is so vital for a democracy. And protection of democracy is so vital for India which is perhaps the only post colonial democratic experiment to succeed. Professor Upendra Baxi,  certainly not an advocate of the Collegium system wisely cautions, "appointments and transfers of justices definitely affect the basic structure, and the court should have a say in it."

LUST FOR POWER AND COMPROMISING JUDICIAL INDEPENDENCE: THE PAKISTAN STORY

In July 1997, Gen. Zia Ul Haq, in a swift military coup, deposed Pakistan's,  elected Prime Minister Zulfikar Ali Bhutto. One of the first acts of the dictator was in appointing Maulvi Mushtaq Hussein a known Bhutto baiter as the Acting Chief Justice of Lahore High Court.

In September 1977, Zia had Bhutto arrested and charged with the murder of a political opponent. It was  based upon a confessional statement made in custody by one Masood. This statement was made  three years after he was arrested, detained and kept in solitary confinement.

Bhutto was tried and sentenced to death by the bench headed by the new Chief Justice Maulvi Mushtaq Hussein of the Lahore High Court. Bhutto’s appeal was heard by 9 judges including the Chief Justice Sheik Anwar-ul-Haq who had earlier referred to Zia as a “National Savior”. In a 4:3 verdict, the Court headed by CJ Sheik Anwar-ul-Haq upheld the conviction and death sentence of Bhutto.

One of the powerful dissenting opinions which mocked the General's farce was authored by Dorab Patel. It is told that after the verdict, General Zia-Ul-Haq made an unscheduled visit to Dorab Patel J. at his residence. The General, strangely, displayed no malice or ill will, was extremely cordial and to the judge's surprise offered to be of whatsoever assistance he would require. This incident appears a strange conduct on the part of a dictator towards the judge whose dissent had completely robbed the verdict of all its legitimacy. 'Zia-Ul- Haq was dead sure, that if at all, there would be one Judge who would stand up against the false prosecution of the dictator himself, in a changed circumstance, it would be Justice Dorab Patel’.

The moral in the tale should not be lost on those who clamour for  executive driven  appointments.

THE MYTH OF THE OLD BRITISH SYTEM OF APPOINTMENTS

There is a persisting and influential myth that the executive driven  appointments in the U.K were always fair. This argument is used to bolster the case for a predominant executive in the NJAC here in India. Prior to the Constitution Reforms Act of 2005, the Lord Chancellor the sole voice in appointment of judges. He was a constitutional anachronism of sorts: he was a Cabinet Minister, head of the judiciary, a senior Judge and also the speaker of the House of Lords. The longest serving member was Lord Halsbury and this is what the legal historian R.F.V. Heuston had to say about his performance:

“Halsbury appointed to the High Court and to a lesser extent to the county court, men of little or no legal learning whose previous career in public life had been largely in the service of the conservative Party or else were relations of his own.

It is this glaring anomaly which resulted in the making of the Judicial Appointments Commission in the U.K without a single politician in the 15 member Commission which is in stark contrast to the NJAC here despite the euphemism.  The logic and reason for this exclusion of the political component is best articulated  by Gordon Brown:

"For centuries, they [the Executive] have exercised authority in the name of the monarchy without the people and their elected representatives being consulted. So I now propose that in 12 important areas of our national life, the Prime Minister and the Executive should surrender or limit their powers, the exclusive exercise of which by the Government of the day should have no place in a modern democracy… And I propose that the Government should consider relinquishing its residual role in the appointment of judges"

This article is a Part I of series called ' COURTS, COMMERCE AND THE CONSTITUTION'

Santosh Paul is an Advocate of the Supreme Court of India. He is the author of the forthcoming book titled `NJAC: The Final Battle for Supremacy' and Choosing Hamurabi : Debate on Judicial Appointments published by LexisNexis.