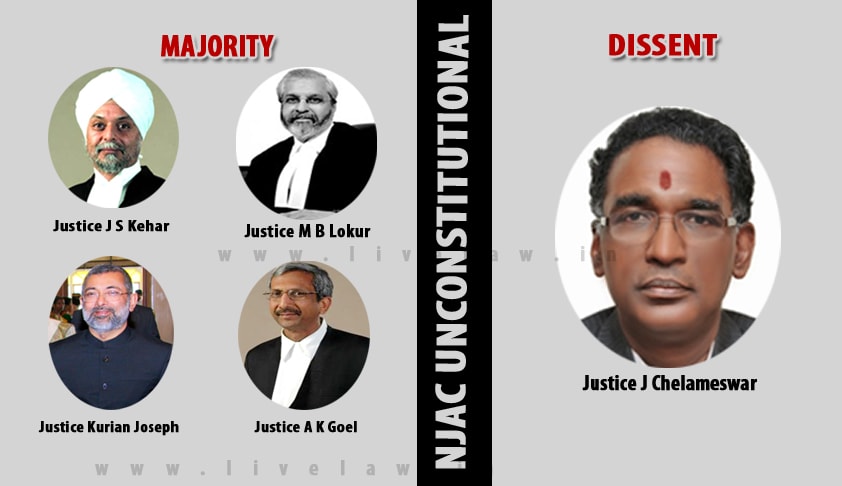 The contention advanced at the hands of the respondents, to the effect, that the provisions of the Constitution which were sought to be amended by the impugned constitutional amendment, would not revive, even if the challenge raised by the petitioners was accepted (and the Constitution (99th Amendment) Act, 2014, was set aside), has been considered under a separate head, to the minutest detail, in terms of the submissions advanced. I have concluded, that with the setting aside of the impugned Constitution (99th Amendment) Act, 2014, the provisions of the Constitution sought to be amended thereby, would automatically revive, and the status quo ante would stand restored.

The National Judicial Appointments Commission Act, 2014 inter alia emanates from Article 124C. It has no independent existence in the absence of the NJAC, constituted under Article 124A(1). Since Articles 124A and 124C have been set aside, as a natural corollary, the National Judicial Appointments Commission Act, 2014 is also liable to be set aside, the same is accordingly hereby struck down. In view of the above, it was not essential for us, to have examined the constitutional vires of individual provisions of the NJAC Act. I have all the same, examined the challenge raised to Sections 5, 6, 7 and 8 thereof. I have concluded, that Sections 5, 6 and 8 of the NJAC Act are ultra vires the provisions of the Constitution".

In April 7, a three-judge bench of the apex court had referred the matter to a five-judge Constitution Bench, the batch of petitions challenging the validity of NJAC Act to replace the two-decade-old Collegium System. Under the old Collegium System, five top judges of the apex court used to recommend the transfer and elevation of judges to the Supreme Court and the 24 High Courts. The NJAC was signed into an Act by President Pranab Mukherjee on December 31, 2014. According to the new act, two eminent persons will be nominated to the NJAC as members by the committee consisting of the Prime Minister, the Chief Justice of India and the Leader of Opposition in Lok Sabha or the leader of single largest Opposition party. The eminent persons will be nominated for a period of three years and will not be eligible for re-nomination.