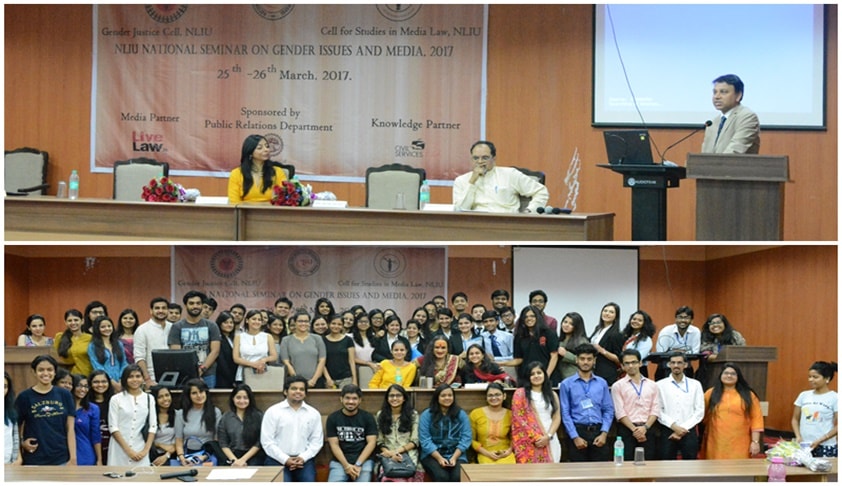 The event ‘Second National Seminar on Gender Issues and Media’ started with the lighting of the lamp by our esteemed guests, Mr. Diwakar Sharma (Director Mass Media, JLU), Ms Madureeta Ananad (Renowned Film maker) and Prof. (Dr.) Mukesh Srivastava.This was the followed by a wonderful insight given by Mr. Diwakar Sharma into the plight of village women in the northern hills of Uttarakhand...

This was the followed by a wonderful insight given by Mr. Diwakar Sharma into the plight of village women in the northern hills of Uttarakhand and the Fear of Voice.

The ceremony came to an end with Prof. (Dr.) Mukesh Shrivastva extending a final welcome and left the audience with a quote by Alfred North Whitehead that sparked conversations in the high tea that followed.

“After you understand about the sun and the stars and the rotation of the earth, you may still miss the radiance of the sunset.”

The first session of the seminar is underway and is on the sub theme - 'Media Coverage of Crime Against Women', The Panel consists of Mrs. Aruna Roy (IPS), Mr. Diwakar Shukla (Director Mass Media, JLU) and Prod.(Dr.) Mukesh Srivastava.

One speaker brought to light the insensitive portrayal of female victims and the character assassination that the media does. Another speaker dealt with conducting of a public trial by the media in case of high profile cases.

The seminar was followed by an interactive session Mrs. Aruna Roy who used personal anecdotes to further deal with the the ongoing topic. She also talked about the positive impact the media can play but at the same time how the media can often play a counterproductive role.

After a fruitful first session and a wonderful lunch we moved on to the second session. the The second session was on the theme ‘Developing Transgender Identity in Social Media’ with panelists Ms Laxmi Narayan Tripathi and Prof Bir Pal Singh

It was an hour of conversation sparking thoughts and interactions. The first two presenters talked about the definition of gender, sex and sexuality asking us to go back to the vedas before shaming transgender community on the grounds of religious purity and spirituality. The speaker suggested a fashion show with transgender models as a way of bringing the third gender into the mainstream.
The next speaker brought the legal aspects of the transgender community into light. He further talked about the recent Transgender bill 2016 and about the protagonist of the session NALSA Vs UOI judgment. He also talked about the need for change in media portrayal of third gender characteristics as a joke.

The last speaker brought with her an overflowing bucket of ideas and suggestions for absorption and betterment of the transgender community into daily Indian lives. Some of her suggestions included using social media platforms to spread awareness about equality and creating an online portal for the trans community.

The session ended with Ms Laxmi’s speech regarding the need to educate ourselves about the evolution of the trans community. She in her own flamboyant manner and wit gave us a spoonful of sugar to help the bitter medicine of trans reality go down. Dr. Bir Pal Singh threw light upon the need for thorough academic research about trans communities and also spoke about the other side of the coin reminding the audience of how a right should never become a privilege.

The second day of the seminar was dealing with Gender Stereotypes in the Entertainment Industry. The panel consists of Ms. Madhureeta Anand (Independent Film maker), Ms. Bhakti Sharma (Sarpanch).

The speakers were trying to analyze different films and identify not only the stereotypes reinforced by them but also suggest constructive steps to fight them.