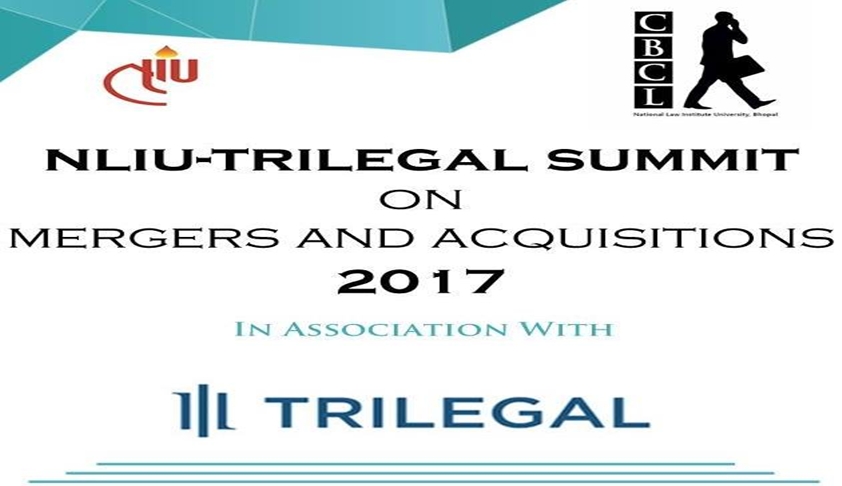 Subscription starts from
₹ 599+GST
(For 6 Months)
View Plans
Premium account gives you:
Subscribe Now
Already a subscriber?
Login
The Centre for Business and Commercial Laws (CBCL) of the National Law Institute University, Bhopal in collaboration with Trilegal, is organizing the second edition of NLIU-Trilegal Summit on Mergers and Acquisitions on 26th February, 2017. It aims at going beyond the letter of law in the analysis of M&A transactions, along with discussing the same with the industry stalwarts.

There has been an enormous increase in demand for corporate lawyers deft at M&A negotiations and transactions as scope for M&A has increased massively with further liberalization of the FDI policy. Therefore, to keep up with the need of the hour, NLIU has stepped up its promotion of work in commercial laws in the past few years and the Summit was conceptualised to compensate for the lack of dedicated modules on M&A in legal courseware in colleges.

The Summit aims to bring together the best talent from top law colleges of the country and provide a platform to discuss M&A issues with peers as well as an interactive panel of judges comprising partners from the collaborating firm, Trilegal, academicians and in-house counsels will be held after the each presentation. The panel will also feature members from the Competition Commission of India.

The Summit will witness sixteen paper presentations from various law colleges all over India discussing Mergers and Acquisitions, within the contours of the sub-themes, in light of the relevant legal provisions.

The top sixeen submissions from both categories have been published in a limited edition book commemorating the Summit.

The Cell has been extremely active in the buildup to the event. The Facebook page, especially, has seen regular updates on M&A transactions including Yahoo-Verizon, Sony Pictures-Ten Sports, and Microsoft-LinkedIn. Detailed yet simple explanations of these deals have been provided on the page, along with interactive videos elaborating the basics of M&A.

This is the second edition of the event, with the first in 2016 having been a resounding success. Organized by an enthusiastic and dedicated Cell, the Summit will serve as a great learning experience for participants and attendees alike.