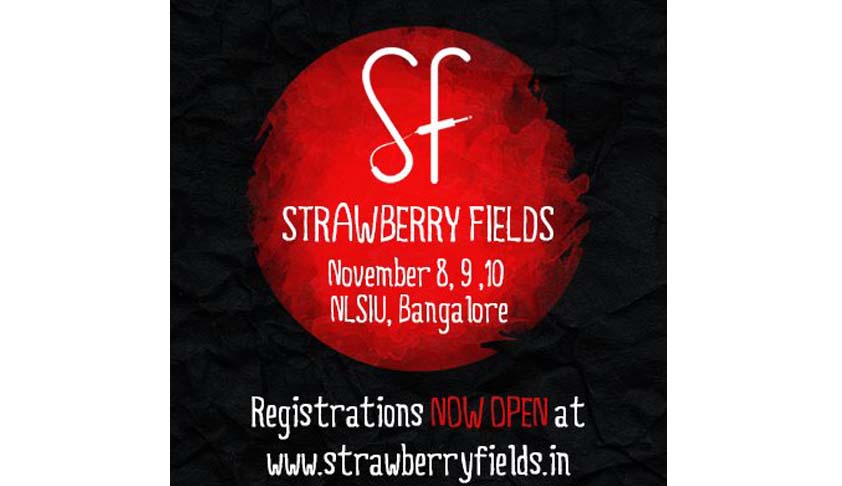 National Law School of India University, Bengaluru is all set to host the 17th edition of the music festival Strawberry Fields from November 8-10, 2013. The show is run with a twin mandate, of providing upcoming bands with a platform, and of providing audiences with free access to high quality music. Apart from having 40 bands participate in this grand melting pot of music, the festival has also traditionally played host to Special Acts and Headliners every year. The professional bands performing at this year’s edition, over the second and third day of the festival, are Clown with a Frown, The DownTroddence, Anthracite, Sky Rabbit and Scribe.

Winner of the 16th edition of Strawberry Fields, Clown with a Frown from Bangalore is a 9 member group replete with a brass section that has turned a sizeable number of heads in the two years of its existence. Playing its brand of pop and funk rock, this group has now become a phenomenal crowd puller. Already set to perform at the Great Indian Octoberfest and the M.A.D Festival in October, this is one act that has the promise of becoming one of the biggest names in Indian music in the coming years. The Down Troddence, a six piece folk/metal band from Kerala has gathered for itself a dedicated following of fans with its music video Shiva garnering over 90,000 views on Youtube and winning the IndieGo South Asian Music Awards. Having won several college competitions, the band is soon set to take the next step by releasing their debut album.

Clown with a Frown and The DownTroddence will be the two Special Acts performing on November 9th, 2013 at Strawberry Fields.

The industrial metal act Anthracite, from Mumbai, has just released its debut album Groove Sandwich and is set to return to Strawberry Fields after having reached the finals in 2012. Anthracite takes the stage as the first Special Act to perform on November 10. They will be followed by Sky Rabbit. This Mumbai-based electro post-punk band’s latest release, Where has been described as one that charts new horizons. Formerly known as Medusa, the band soon re-modelled itself as Sky Rabbit and assumed the alternative/electronic sound that it is now famous for. Sky Rabbit has recorded with legendary producer John Leckie (known for his work with Pink Floyd, Radiohead, The Verve, etc.) and toured the United Kingdom. And headlining the show this year is the hardcore/experimental act Scribe, from Mumbai. Having been an integral player in the Indian music scene for 8 years, Scribe is largely recognised as one of the most technically proficient bands in the metal scene in India. Their amazing run includes winning Independence Rock 2007 at Mumbai, a performance at the famous Inferno Metal Festival in Norway and winning the Best Metal Album, Best Metal Band, Best Metal Song and the Best Metal Vocalist at the first ever Rolling Stone Metal Awards in 2010.

Anthracite, Sky Rabbit and Scribe will perform at Strawberry Fields, on November 10th, 2013, at the National Law School of India University campus, Bangalore. Entry for all three days of the festival is free.