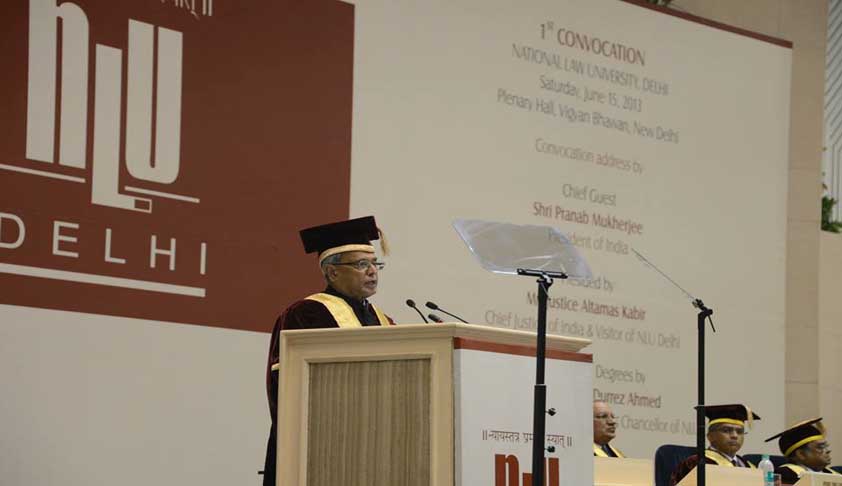 The degrees were conferred by Justice Badar Durrez Ahmed, Acting Chief Justice of the Delhi High Court and Chancellor of NLU Delhi.

Justice Dalveer Bhandari, Judge, International Court of Justice (ICJ) & former Judge, Supreme Court of India; was conferred with LL.D. (Honoris Causa). Justice Bhandari is the fourth Indian to be appointed as a Permanent Judge at the ICJ.

President Pranab Mukherjee highlighted the importance of lawyers in the society and said, “Lawyers play an important role in enabling the public access to justice and ensuring that our Constitution becomes a living reality. The legal profession is regarded a noble profession in every society where the rule of law prevails.”

President requested the student community of NLUD to always keep in mind the fact that the wonderful education they have received is a contribution of the state and the community. He said, “The land on which your university stands has been provided by community. Similarly, these buildings, the books that fill your library, the online databases etc. come from money that the state has invested in you. The nation invests in its Universities because students are our future. Students, in turn, have an important responsibility, not just to themselves and their families but also to this country, its legal system and its people.”

President further cautioned the young graduates that they must constantly look for ways in which they can give back to their country. He added, “I hope all of you gathered here will take up legal aid for the poor as a lifelong commitment and do your utmost to draw attention to the problems of the disempowered. However, do not do this demanding or expecting gratitude. Do it as your duty.”

You can read the entire Convocation Address here.