NLU Delhi Runs For A Cause 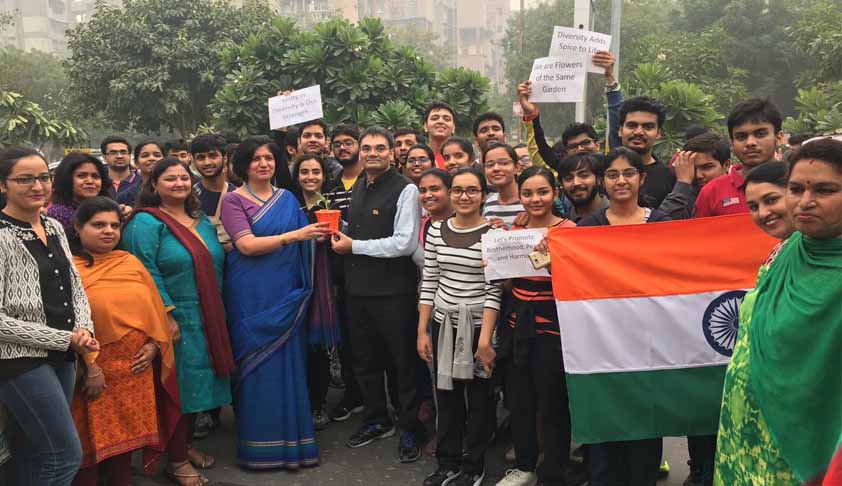 National Law University Delhi had organised a unity run as a part of the nationwide campaign of ‘RashtriyaEktaSaptah’ in Dwarka on the morning of 5 November 2016.

52 students of the B.A., LL.B. programme participated in the run organized in the densely populated Sectors 22 and 23 of Dwarka.This activity aimed at strengthening the feeling of unity in diversity, and to convey the message of a unified Bharat. The Vice Chancellor of NLUD, Prof. Ranbir Singh and Registrar Prof. G.S. Bajpai took a keen interest in seeing the success of the event. However, it remained primarily a student driven initiative. The enthusiasm of the students could be seen not only in the numbers, but also the zeal and lively participation demonstrated on the road.

Dr. Prasannanshu the Professor coordinating this run was full of appreciation for the students and he expressed his optimism for the future of the country after witnessing the soulful participation of the youth.

Anugya and Aditya, two of the participants said the unity run was an exhilarating experience.

“The event reinforced the spirit of brotherhood and harmony” said Karan who also participated in the run. A similar experience was shared by Anant, Anirudh and Amit who were the flag bearers.

The unity run started from outside of the Chitrakoot Apartments where Sh. Shashi Kant Kapoor, President; Captain SS Mann, Vice President; Sh. Prem Bihari Mishra, General Secretary; Sh. DC Mathur, Secretary, and other members of the Organization ‘SukhDukhkeSathi’ flagged off the run. It was again warmly welcomed by Sh. Mukesh Sinha, and Mrs.Sudha Sinha on its way outside Dilli Apartments.

The students were motivated by the words of Dr. Shabana Nazeer, a Retired School Principal and enthusiastically chanted slogans on national unity and unity in diversity along with her. The next point on the route was Delhi International School where Ms. Rashmi Malik the Principal greeted the procession at the gate of the school along with her faculty members and students. It was very encouraging to see Ms. Rashmi Malik, her faculty members and students join the run to show their solidarity with the cause of the run, and the students of NLU, Delhi. Finally Assistant Commissioner of Police Mr. Meena addressed the students, and the students in turn thanked him and had photographs taken with him. He praised the students for their efforts.