NLU Delhi’s Death Penalty Research Project raises 7 lakhs in 7 days for rehabilitation of Adambhai, one of the acquitted persons in the 2002 Akshardham terror case 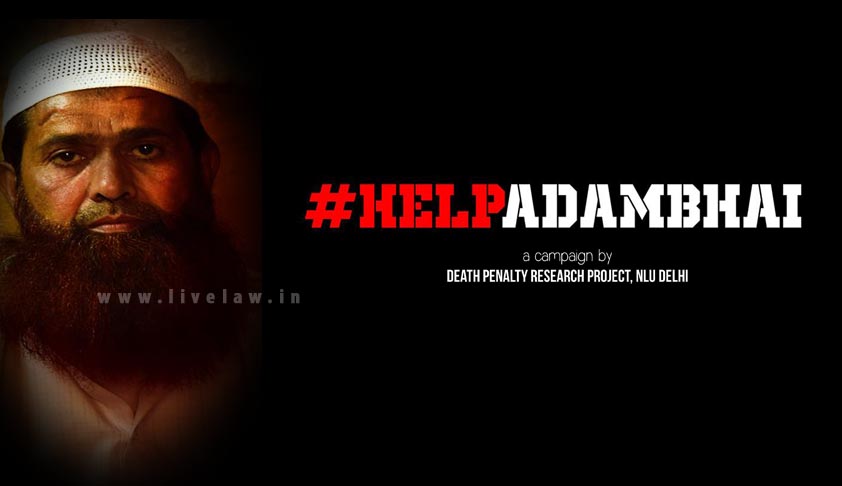 In a display of unparalleled compassion, the Death Penalty Research Project, National Law University has successfully raised the target amount of Rs. 7 lakhs in 7 days, to help in rehabilitation of Adam Suleiman Ajmeri, one of the acquitted persons in the 2002 Akshardham terror case.Seeking support for Adambhai and his family, the campaign note had said, “Grim memories are woven...

In a display of unparalleled compassion, the Death Penalty Research Project, National Law University has successfully raised the target amount of Rs. 7 lakhs in 7 days, to help in rehabilitation of Adam Suleiman Ajmeri, one of the acquitted persons in the 2002 Akshardham terror case.

Seeking support for Adambhai and his family, the campaign note had said, “Grim memories are woven into Adambhai’s past, proffering neither solace nor escape, and the future does not seem to hold in its uncertainty the promise of a better life. He does not have the means to eke out even a meager living, much less the ability to reconstruct his life from the shattered remains of what is left of his past. Let us help Adambhai start afresh.”

The appeal in the end read, “Your contribution towards setting up Adambhai’s business will help sustain him and his family. Support Adambhai and his family to rebuild their lives and reclaim their lost years. Please donate.”

The Death Penalty Research Project first came in contact with Adam bhai in February 2014. Mr. Anup Surendranath, Director, Death Penalty Research Project. According to Mr. Surendranath’s account, Adam bhai contacted them a couple of months after his release, with the troubling news that he was finding it very difficult to make ends meet. Eleven years in prison and inhumane custodial torture had left him incapable of doing many things.

Adam bhai was arrested in August 2003; almost 11 months after the terrorist attack on the temple, illegally detained for close to a month and was tortured to confess the crime.

He was then convicted by a Special Court in 2006, convicted and sentenced him to death. The death sentence was confirmed by the High Court in 2010.

In May last year, the Supreme Court had all the six accused, after they had spent almost 11 years behind the bars.

While acquitting the accused the Court also held that, “Before parting with the judgment, we intend to express our anguish about the incompetence with which the investigating agencies conducted the investigation of the case of such a grievous nature, involving the integrity and security of the Nation. Instead of booking the real culprits responsible for taking so many precious lives, the police caught innocent people and got imposed the grievous charges against them which resulted in their conviction and subsequent sentencing.”

Speaking to LiveLaw, Dr. Anup Surendranath had said, “As part of the Death Penalty Research Project at NLU Delhi, we had interviewed all three prisoners sentenced to death in this case in Ahmedabad Central Jail. While I am of course not at liberty to reveal the contents of that conversation, it is heartening to see that the Justices AK Patnaik and Gopala Gowda gave sufficient weight to the critical lapses in the investigation and trial and rightly found it sufficient to acquit the three death row prisoners along with others convicted in the case. Very often the rhetoric of national security results in compromising the integrity of the legal process and it is to the credit of the two judges that they have upheld the highest traditions of the rule of law.”

The six acquitted had also demanded compensation, rehabilitation and punishment to officials who falsely implicated them in the case. Addressing a Press Conference, they had reportedly demanded adequate compensation from the Gujarat Government and the then Chief Minister, Narendra Modi, for the long periods of confinement that they had to go through. Read the LiveLaw story here.

Adam bhai is now struggling to get back into his life and the Death Penalty Research Project has come to its rescue. He now lives with his family of seven, consisting of his wife and six children in Ahmedabad, struggling to make ends meet. He was an auto driver before he got arrested. He is presently unemployed; his family subsists on a meager Rs. 5000 per month earned by his elder son Muhammad Almas, who runs a sewing unit.

He plans to rent a small area of land on the outskirts of Ahmedabad to rear goats and cows to sell milk and milk products. According to his estimates, he was to require an initial capital to the tune of Rs 7, 00,000.

The support garnered by the campaign has been tremendous. Last checked, it had 364 supporters with Rs. 7, 34,452 already raised. DPRP’s project would be able to save the livelihood of one such wronged person. However, as Mr. Surendranath has rightly put it,  “Work like this continuously teaches us so many things and Adambhai’s struggle has taught us that the romantic notions of freedom has so little meaning when faced with the grim realities of daily survival.”