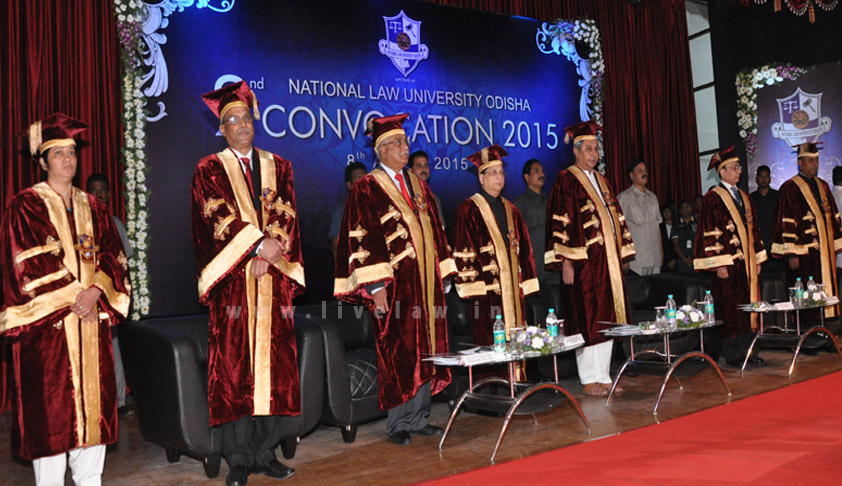 The speech of the President of India who was invited originally to give the Convocation address was read by the Chancellor in absentia as he was unable to come due to some unavoidable reason. He advised them to have a sense of duty to fight injustice and forefront against criminality, domestic violence, caste discrimination and other forms of exploitation. He also added that it is important to lend their voice to the voiceless, represent the powerless and obtain justice for them. He stressed upon the importance of the Indian Constitution as a powerful guarantor of justice, liberty and equality and urged that the graduating students should have it at the bottom of their heart. He stressed upon the importance of the cause of democracy and how it should be served well by engaging themselves with the issues of national interest.

Stressing the importance of learning as a life-long process, Vice-Chancellor of NLUO Srikrishna Deva Rao quoted Nobel Laureate Rabindranath Tagore: “A teacher cannot teach unless he is still learning, a lamp cannot light another lamp unless it is burning.” He also underlines the constant endeavour at NLUO to come up with intellectually stimulating research in law and its interdisciplinary fields. “Contribution of law schools in legal research, legal aid, and legal clinics have made a significant impact to ensure access to justice for needy and poor,” stated Mr. Rao. “However, still it is not enough; we have miles to go”, he added. The involvement of the University’s vibrant student community with co-curricular activities has yielded remarkable results, including consistently high results and performance in moot court competitions, active participation in prestigious national and international academic conferences, and seminars, said the Vice-Chancellor, NLUO. The liberal yet demanding academic culture, coupled with the friendly environment have ensured that students are able to harness their full potential and contribute in the area of their choice, he remarked.

The Registrar of NLUO Dr. Dolly Jabbal, a host of dignitaries from the legal fraternity, parents of students, and staff of NLUO were also present for the occasion. The second issue of the National Law University, Odisha journal on “Access to Justice” was also released on this occasion by the Visitor, NLUO.