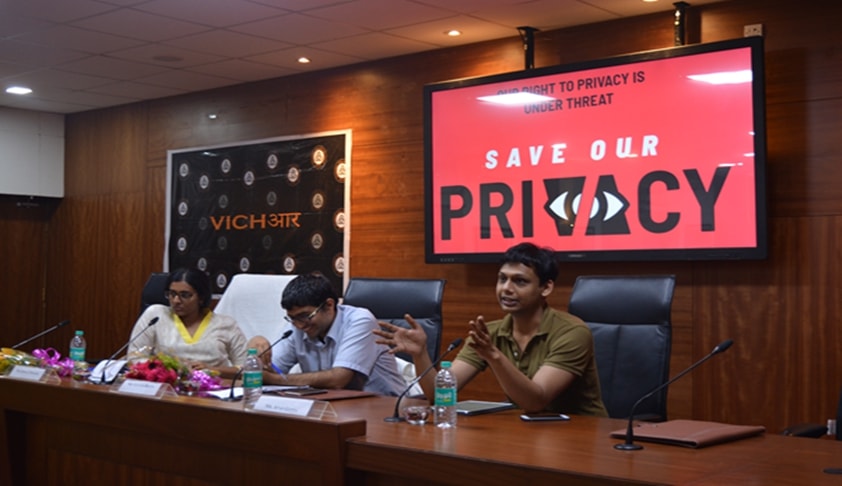 The Informal Discussion Group (IDG) at National Law University, Odisha was established in 2016, to provide exposure for interdisciplinary learning by way of informal discussions with people at the forefront of their fields, organizing panel discussions on burning issues and other related activities to foster the culture of informed reasoning for holistic learning.

IDG conducted its first flagship event VICHआर in March 2017 with a Foreign Policy Panel Discussion. This year the event VICHआर 2.0 was conducted on 28th July with Mr Gautam Bhatia, Ms Ujwala Upalluri and Mr Apar Gupta as the panellists. The topic for this year's VICHआर was 'Citizens' Privacy Code, as part of the broader, on-going national conversation about data protection, surveillance, and the right to privacy.'

The session aimed at imparting awareness for and inviting constructive discussions on the recent developments in the sphere of Right to Privacy in India. The Srikrishna Committee report that was released just a day prior to the scheduled panel discussion was the main background of the discussion.

The question-answer session commenced with a myriad of questions ranging from the implementation of the Right to Privacy from an administrative point of view to its reconciliation with RTI. The panel discussion was self-moderated by Mr. Gautam Bhatia.

Another question that was deliberated upon was that it often happens that people file RTI’s and the information is not disclosed citing various pretexts like ‘Public Interest’ and ‘National Security’ etc. Will the Citizen’s Privacy Code append to these pretexts? The discussion on public intimacy was a result of a question asked by a student, pertaining to the working of the Doctrine of Waiver in the sphere of privacy.

In yet another question, the reason for Right to Privacy was questioned on the grounds that information sharing is essential in a globalized world and instead of taking a paranoid approach we should also ponder on what if the information is used in a meaningful way. It was also discussed that privacy is very broad a term and it is difficult to come up with an objective and all-encompassing definition. The Citizen’s Privacy Code contains such minimums which have been identified as a result of extensive research from our past to present.