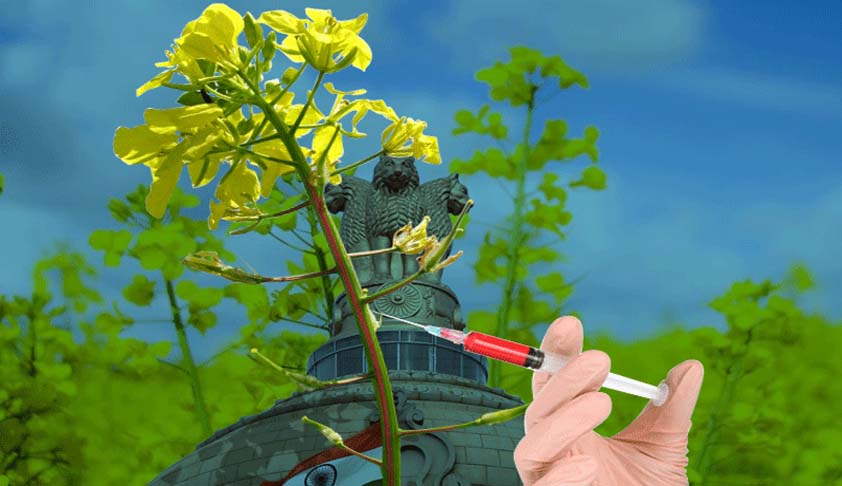 Government of India has submitted before the Supreme Court that no release of Genetically Modified Organisms shall take place till 17.10.2016 because the Government has sought views from the public and upon receipt of such views and objections the matter will be considered by a Committee of experts which process cannot be completed by 17.10.2016. The Court has recorded the submission and...

Government of India has submitted before the Supreme Court that no release of Genetically Modified Organisms shall take place till 17.10.2016 because the Government has sought views from the public and upon receipt of such views and objections the matter will be considered by a Committee of experts which process cannot be completed by 17.10.2016. The Court has recorded the submission and posted the matter to October 17, for further hearing.

With the decision on commercial approval of GM Mustard on the anvil, anti-GMO campaigner Aruna Rodrigues had filed the  petition seeking a moratorium on the release of any genetically modified organisms (GMOs) into the environment pending a rigorous bio-safety protocol conducted by independent expert bodies.

Prashant Bhushan, counsel of the petitioner, has sought a prohibition of open field trials and commercial release of genetically modified crops, including Herbicide Tolerant Mustard DMH 11. The petitioners drew attention to the potential bio-safety and bio-security hazards to India as the crop is slated for commercial release.

The application pleads prohibition of open field trials and commercial release of the herbicide tolerant (HT) crops, including HT Mustard DMH 11. The petitioners also prayed that the authorities be directed to carry out implementation of the TEC report recommendations. Citing a slew of irregularities on part of the authorities, the petitioners prayed for constitution of an inquiry into the field trials and application process of HT Mustard DMH 11.

Prashant Bhushan contended that, ‘three other official GOI reports also support the unanimous findings of the TEC 5-Member Committee in terms of the abysmal state of GMO regulatory oversight, and the need for the Precautionary Principle (PP) to be applied without delay’. He put forth that the TEC recommends a bar on HT crops as well as on crops of ‘origin’ and India is the centre of origin and/diversity of both mustard and brinjal.

“The relevance of this report now and the need for the implementation of its recommendations has become super critical to overturn a slew of illegal regulatory decisions to bring HT hybrid Mustard DMH 11 and its two HT parental lines, to the point of imminent commercialisation (scheduled for early Oct),” he stated.

He alleged that the regulatory institutions under the government and the developers - Centre for Genetic Manipulation of Crop Plants (CGMCP) - involved in ‘regulatory jugglery’ and ‘brazen display of collusion to fraud the nation’ with sceptical oversight and precautionary regulations.

It was further stated along with evidence that DMH 11 was not tested according to the established norms of the All-India Co-ordinated Research Protocols of Rape-Mustard (AICRP-RM), which were comprehensively flouted in field trials to test seed yield. They claimed that in the absence of adequate and proper agronomic testing and sufficiency of data, the conclusions are rendered invalid.

Secondly, the application alleged that deliberate use of the wrong low-yielding ‘comparators’ is a serious deviation from every regulatory norm and ethical conduct and thirdly, allegations of  statistical manipulation of data have also been raised on the authorities.

The application puts forth the TEC report revelation that the HT crops are like sponges, absorbing significant quantities of herbicide into the plant and can be easily categorised as herbicidal crops. The herbicide residue Glufosinate, that is retained on the plant, is known for its toxic effects and resultant brain abnormalities in animal studies. Its persistence in the environment is also likely to contaminate the water.

Drawing attention to the social aspects, he stated it can displace women who are traditionally employed in weeding, without any alternate source of employment.

He stated, “There is no oversight. The petitioners humbly state that the present situation requires the immediate recognition by the Hon’ble Court that the time-factor or ‘timeliness’ of its decision to stop environmental release of GMOs has now become a ‘criticality’.”

The application pleaded for immediate attention of the court in the face of circumstances where timeliness of its decision has attained criticality and stated: “The nation faces maverick regulators and regulatory tyranny seriously threatening and irreversibly, India’s biosafety, her food security and contravening India’s Constitution. The agenda is policy-driven.”

Read the order and petition here.