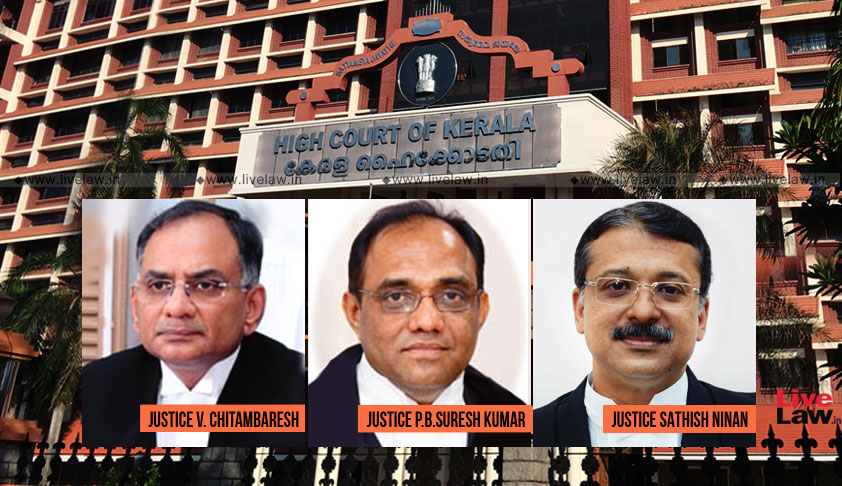 A Full Bench of High Court of Kerala has held by 2:1 majority that quarrying sites will not come within the definition of 'commercial site' under Section 2(5) of the Kerala Land Reforms Act, 1963 so as to qualify for exemption from ceiling limit under 81(1)(q) of the Act.While Justices Chitambaresh and Sathish Ninan ruled against granting exemption to quarrying sites, Justice P B...

A Full Bench of High Court of Kerala has held by 2:1 majority that quarrying sites will not come within the definition of 'commercial site' under Section 2(5) of the Kerala Land Reforms Act, 1963 so as to qualify for exemption from ceiling limit under 81(1)(q) of the Act.

While Justices Chitambaresh and Sathish Ninan ruled against granting exemption to quarrying sites, Justice P B Sureshkumar dissented to hold that quarrying sites would qualify as 'commercial sites'. Commercial site is defined in the Act as any land which is "used principally for the purposes of any trade, commerce, industry, manufacture or business"

The matter arose out of doubt expressed as to the correctness of view expressed in the 1996 decision State of Kerala v Muhammedali Haji which held that "blasting of rock for the purpose of making rubbles or metals or cutting of laterite block into stones is a manufacturing operation and any land meant for such use is a commercial site, as defined in Section 2(5), entitling exemption as provided in Section 81(1)(q) of the Act". This conclusion was reached reversing that view taken by a Single Judge in 1975 in Krishnan Kutty v State of Kerala that "mere fact that operation such as blasting and conversion into metals is being conducted in a rocky area does not render the area a commercial site".

Doubting the correctness of view expressed in Muhammedali, a Single Judge referred the matter to Division Bench. It was observed that this will aid conversion of agricultural land, defeating the purposes of the Act and also leading to environmental degradation. The doubt of Single Judge was endorsed by the Division Bench and matter was referred to Full Bench.

The land in question was a rocky area amidst a plantation which was proposed to be used for qaurrying operations.

Answering the reference, the majority judgment authored by Justice V Chitambaresh held "The term 'commercial site' has to be so construed to prevent the mischief of any holder of land from claiming any exemption by starting industrial activity consuming the very land. A literal interpretation of the term 'commercial site' as defined in Section 2(5) of the Act will have the deleterious effect of environmental depredation as observed by the referring Judge"

The majority noted that Section 81(3) of the Act empowered Government to exempt, inter alia, commercial lands from the provision of the Act for bona fide public interest. If commercial sites stood autmotically exempted from the Act as per Section 81(1)(q), there was no need to empower Government to give exemption to lands used for commercial purposes. Hence, the definition of 'commercial sites' under section 2(5) has to be read narrowly, reasoned the majority.

The majority further reasoned that provisions of an Act should be interpreted to avoid mischief. The view taken in Muhammedali case will defeat the purpose of the Act, which was to distribute excess land to landless . As per Muhammedali view, any  holder can claim exemption contending that he is removing the entire sub soil, which is an industry or is selling the entire block of land itself, which is a trade.

Thus, the Muhammedali judgment was overruled and the decision in Krishnankutty was approved. The majority however added that any industrial activity existing on the surface of the land like a metalcrusher unit or artificial sand manufacturing unit may perhaps qualify for exemption.

Justice P B Sureshkumar, in his dissenting judgment, expressed that the Act has to be interpreted in accordance with the objective of the Act, which was to promote agrarian reforms and equitable distribution of excess land. The Act was made drawing power from Entry 18 of List II of the Seventh Schedule to the Constitution dealing with the right in or over land, land tenures, transfer and alienation of agricultural land etc. Hence, concerns regarding degradation of environment should not find place while interpreting the provisions of the Land Reforms Act.

The words used in the definition of Commercial Site, namely, trade, commerce, industry, manufacture and business are general words, which are to be attributed their common and ordinary meaning. There cannot be any dispute to the fact that granite stones are extracted from private quarries mostly as part of business for sale for profit. Hence, quarrying in private land was a commercial activity, held Justice Suresh Kumar, though no conclusive view was expressed whether it would amount to "manufacturing" due to involvement of blasting operations.

The dissenting judge enquired the State as to how quarries which were existing at the time of the enactment of the Act were permitted to continue operation.The answer was that such lands were exempted under Section 81(1)(k) of the Act. It was noted that Section 81(1)(k) also employed the expression 'commercial activity'.

"The State concedes that for the purpose of permitting the existing quarries to continue, the quarrying activity was understood to have been a commercial activity", the dissenting judgment observed.

Interestingly, the dissenting judge also placed reliance on Section 81(3) to support his conclusions, as the majority judgment. The argument that denial of exemption from ceiling limit will shut down all quarries was addressed by the State by pointing out that Section 81(3) empowered State to give exemption to lands where commercial activities were carried out. In this regard it was observed by Justice Suresh Kumar as "If quarrying sites are to be treated as commercial sites in the context of Sections 81(1)(k) and 81(3) of the Act, there is no reason why the same shall not be treated as “commercial sites” for the purpose of Section 81(1)(q)"