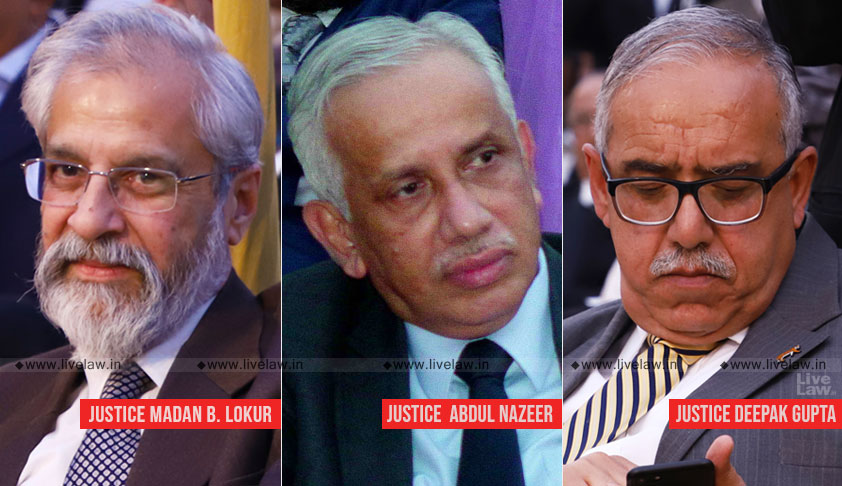 The Supreme Court has reiterated that when the appointments were illegal and void ab initio, the question of regularization of their services by invoking the judgment in Umadevi case does not arise.

The bench comprising Justice Madan B. Lokur, Justice S. Abdul Nazeer and Justice Deepak Gupta allowed appeal filed by the State of Bihar against the Patna High Court order directing reinstatement of many employees in service in a primary health centre.

The state government, after having found that a large number of appointments were made on the basis of false or forged documents, without following due process of recruitment and mostly without the appointment orders, cancelled such appointments and the concerned incumbents were discharged from service. The high court had set aside such termination invoking Umadevi judgment.

The bench explained the Umadevi judgment and observed that the Constitution Bench has held that unless the appointment is made in terms of the relevant rules and after a proper competition among qualified persons, the same would not confer any right on the appointee. “If it is a contractual appointment, the appointment comes to an end at the end of the contract, if it was an engagement or appointment on daily wages or casual basis, the same would come to an end when it is discontinued. A temporary employee could not claim to be made permanent on the expiry of his term of appointment. It was also clarified that merely because a temporary employee or a casual wage worker is continued for a time beyond the term of his appointment, he would not be entitled to be absorbed in regular service or made permanent, merely on the strength of such continuance, if the original appointment was not made by following a due process of selection as envisaged by the relevant rules,” it added.

The court also took note of the State Committee report that many of them had secured an appointment by producing fake or forged appointment letter or had been inducted into government service surreptitiously by the concerned Civil Surgeon-cum-Chief Medical Officer by issuing a posting order.

It highlighted Para 7 of the judgment in State of Karnataka v. M.L. Kesari, wherein this observation was made: “The appointment of such employee should not be illegal, even if irregular. Where the appointments are not made or continued against sanctioned posts or where the persons appointed do not possess the prescribed minimum qualifications, the appointments will be considered to be illegal.”

Allowing the appeals, the court said: “The State Committee on appreciation of the materials on record has opined that their appointment was illegal and void ab initio. We do not find any ground to disagree with the finding of the State Committee. In the circumstances, the question of regularisation of their services by invoking para 53 of the judgment in Umadevi (supra) does not arise. Since the appointment of the petitioners is ab initio void, they cannot be said to be the civil servants of the State. Therefore, holding disciplinary proceedings envisaged by Article 311 of the Constitution or under any other disciplinary rules shall not arise.”