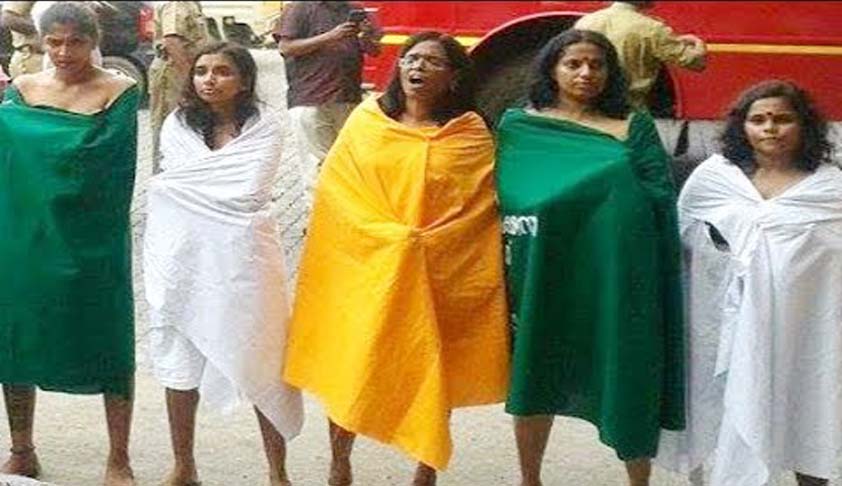 Court quashed the case against 6 accused women including two lady lawyers for conducting protest march in shawls wrapped with slogans against atrocities of women , in wake of rape and murder of two girls at Badaoul, Uttar Pradesh.The Kerala High Court in Adv Preetha K.K and other v State of Kerala and another[Crl M.C 67482014] has while quashing the criminal case against 6 accused including...

Court quashed the case against 6 accused women including two lady lawyers for conducting protest march in shawls wrapped with slogans against atrocities of women , in wake of rape and murder of two girls at Badaoul, Uttar Pradesh.

The Kerala High Court in Adv Preetha K.K and other v State of Kerala and another[Crl M.C 67482014] has while quashing the criminal case against 6 accused including two practicing lady advocates of the court has ruled that nudity in any form by itself will not legally fulfill the requirement of obscenity and further that vulgarity is different from obscenity.

The facts leading to registration of crime were that the accused persons, who are women, covered themselves with shawls written of various slogans against the atrocities of offences committed towards women .It is further their actions had the effect of causing disturbance on a public road with heavy traffic and commutation of people and vehicles.The Photographs depicting such nudity were widely circulated in social media and other mediums as well. Hence crime was registered against the accused on the ground that they had exposed nudity and caused obstruction to the commuters and vehicles and thereby committed offences u/s 143,147,149,238,294(a) r/w Section 118 (a) of Kerala Police Act etc.

Petitioners on the contrary contended that they had conducted a march to protest against an incident involving alleged rape and murder of two teenaged girls at Badaol,Uttar Pradesh in June ,2014. Citing the failure of the law enforcing agency /police machinery to nab the criminals, the women accused concerned in this case led by two prominent lawyers of the court , had assembled in front of a flat at a public road,covering their normal dresses with shawls and having written slogans against atrocities of serious heinous offences committed against women. Hence they contended that their acts , were not in any manner attracted to the offences charged against them in this regard. They submitted that what they had intended in their procession was a mere protest and gesture of solidarity against the atrocity committed against women at Badaol, Uttar Pradesh.

Justice Alexander Thomas on a sharp and precise analysis of the statutory provisions, including Justice Verma commission report observed that the entire proceedings against accused by the police machinery were sheer abuse of process of law and further that none of the accused had committed any offence as alleged by the prosecution.

Regarding the alleged offence of obsencity, the court after a through perusal of Judicial pronouncements held that nudity in any form by itself will not legally fulfill the requirement of obscenity and further that vulgarity is different from obscenity. Justice Alexander Thomas observed :-“Evaluating the allegations in the impugned Anx.I criminal proceedings in the light of the aforestated well settled legal principles, it is to be noted that nudity by itself will not legally fulfill the requirement of obscenity as envisaged in Sec.292 and Sec.294 (a) of the I.P.C. and that vulgarity is different from obscenity. Even the respondents clearly advert to in their materials in the impugned Anx.I criminal proceedings that the petitioners, who are women accused, were demonstrating and agitating against heinous and grave offences committed against women and teenaged girls. Though there is a reference in the impugned Anx.I FIR that they exposed nudity, the photographs as in Anx.II were widely circulated in the print media as well as social media to highlight the novel form of agitation by the women activists to show their active protest against the commission of such grave and heinous crimes and to show their solidarity and sisterhood with the teenaged victims of murder and rape. Anx.II photographs would also show that all the accused had covered themselves with shawls, wherein there were slogans written on its back portion and the shawls had covered their apparels and the shawls were placed in such a way as if they would expose their nudity to show their protest against the said incidents of crimes. During the course of the hearing, to a pointed question to the learned Public Prosecutor appearing for the respondents as to the respondents have any case that the true state of affairs were not in the manner shown in Anx.II, the learned Public Prosecutor fairly submitted that the respondents are not in a position to assert against the correctness of Anx.II, but that as the law and order enforcing machinery, the Police have resorted to the impugned criminal proceedings, etc. This Court, on an evaluation of the entire facts and circumstances of this case, has no hesitation to hold that by no stretch of imagination can it be held that the accused have in any way committed an act, which amounts to a lascivious act or which appeals to the prurient interest or that it tended to deprave, corrupt and defile the morals of any persons, so as to attract the vital elements of obscenity as contemplated in Secs.292 and 294(a) of the I.P.C.”