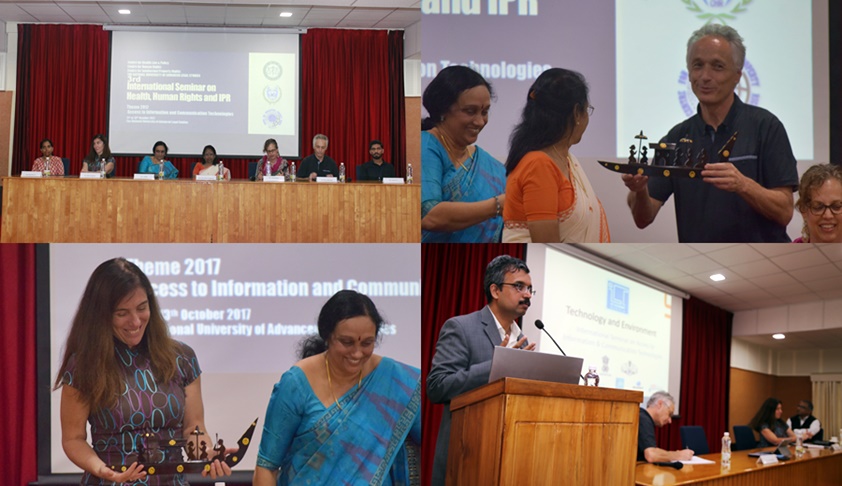 Special Lecture by Dr. Arul ScariaThe special talk by Dr. Arul Scaria, National Law University, Delhi, brought to light the open science movement. The learned speaker commenced the interaction session by quoting real life instances about researchers who engaged in fabricating reports to masquerade them as his own theories and staging their success which was not real. Some of these theories...

The special talk by Dr. Arul Scaria, National Law University, Delhi, brought to light the open science movement. The learned speaker commenced the interaction session by quoting real life instances about researchers who engaged in fabricating reports to masquerade them as his own theories and staging their success which was not real. Some of these theories were – ‘Meat-eaters are more selfish and less social than vegetarians’, Trash-filled environment tended to bring out racist tendencies’, etc. The burning issue was the fate of doctoral and post-doctoral students who had taken such fabricated documents as reference materials. Such practices adversely affect not only the researchers but also the surrounding people.

Another global crisis which happens across disciplines is the concept of paid authorship. A revolutionary solution to this is open science, which broadly refers to scientific inquiries wherein the characteristics of accounting, data collection and compilation is given transparency. It encompasses open access, open data, open lab notes, open research tools and optimal usage of scientific resources. He conducted a research along with his enthusiastic team which discussed the status quo highlighting the sharing practices of respondents, factors influencing data publication, sharing research techniques and mythology used. He challenged the status quo and suggested encouragement of data citations, providing simplified version of scientific research, strict implementation of the Marrakesh Treaty and a need for radical change in innovation techniques. He concluded by quoting Mahatma Gandhi and the need for change in today’s time.

Discussions and deliberations on the three-day International Seminar on Health, Human Rights and IPR, being held at the National University of Advanced Legal Studies, held successfully. The session was chaired by Dr. Sitharaman Kakarala who was also the first speaker for the session. He aimed at linking technology and environment through Human Right. He stressed on the fact that every problem can be possible solved with technology. Technological dystopia has evolved over past few decades and its mention can be various works like Myth of the Machine and Works on Technological Society. Human Rights are the wake of technology and should catch up with it. He propounded three main theories – Firstly, principle of cautious optimization which says that technology undoubtedly displaces jobs today, but creates more tomorrow; secondly, principle of eternal scrutiny which is liberal in nature and says that technology at design level needs to be democratized; thirdly, principle of citizen agency which will focus on providing more control to citizens. The lecture ended by discussing sustainable development goals of sustainable consumption, full responsibility and combating climate change.

The next presentation was on the topic of ‘Big Data and Law’ by Mr. Pierre Mazzega and Ms. Claire Lajaunie who talked about legal texts as big data as well as health issues between bio diversity and climate change. They defined law as an open self-organized evolving complex normative system and the approach followed was evidence-based. Various new concepts were introduced including concept of bag of words, concept of hierarchy, ontology building and mapping citation networks. Through their research, a comparison was drawn between the French Environment Code to French System of Legal Codes. The presentation ended pushing the need for introduction of new legislations as well as enforcement of current legislations like Convention on Biological Diversity and Convention on Migratory Species.

The third speaker for the session, Mr. Santhosh Kurup, emphasized that technology is an important tool which enables us to collect and transmit quality data. He said that technology can be understood through organizational aspect as well as beneficiary aspect. The concept of green computing which refers to eco-friendly use of technology is of great relevance. He ended his presentation by showing an informative video on sustainable development and the need of the hour to take action with an immediate effect.

This session was concluded by an interactive question answer round.

The chair of the session was Dr. Bismi Gopalakrishnan and the resource persons for the same were Dr. Claire Lajuanie, Dr. Pierre Mazzega, Dr. Vani Kesari.

Dr. Claire and Dr. Pierre started off with the presentation on ICT challenges and legal frameworks. According to them law should respond to the phenomena increasingly globally and also locally. ICT can be used for a better implementation of law. Further, information about the ‘objects of law’ broadens our conception of law. They also stated that the innovative ways to reflect on emerging trends are globalization of law and adaptivity of law.

Subsequently, Dr. Vani took over the mic and introduced the audience about the telemedicine and rough terrains of regulatory challenges. She holds that we predominantly live in an era where business and services are controlled by telecommunication and data technology. Then, she shifted to the reasons for searching alternative models of medicine which are: high cost, population growth, budget constraints, unequal distribution etc. Thus, the key issues such as access, equity, quality and cost effectiveness can be solved by way of telemedicine. She gave us insights into the concept of telemedicine which literally means ‘healing at distance’. Doctors link up with their patients by phone, email, web camera etc. Thus, consultation takes place electronically. Some of the positive dimensions of telemedicine are better disease management, reduced travel time, easy access to patients, reduced cost etc. The concept is still in nascent stage in India. In the later slides she elaborated on the apprehensions and challenges on telemedicine. These are: jurisdiction problems, legal ambiguities, potential liabilities of health professional, duty to maintain confidentiality and privacy of patient records. In conclusion, she emphasized on the need to have an adequate law in India to effectively regulate the mechanism and the remedial system and to increase the standard of public safety awareness.

Dr. Mini ended the session with her insightful presentation on the topic “Telemedicine & Access to Quality Health care Service”. She concluded her presentation by putting forth her suggestions including increasing public awareness, monitoring of the safety of clinical systems, education of health professionals among others.