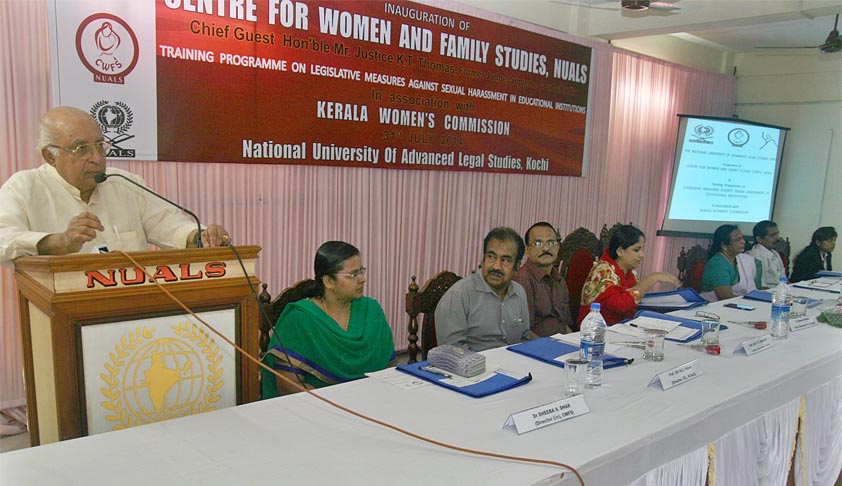 The National University of Advanced Legal Studies, Kochi has inaugurated the Centre for Women and Family Studies.

The Chief Guest was Hon’ble Mr. Justice K. T. Thomas, former Judge of the Supreme Court of India, who elucidated upon the important provisions providing protection to women against sexual offences. He also impressed upon those present, S. 96 of IPC, which states that nothing is an offence which is done in exercise of Right to Private Defence

A Training Programme on Legislative Measures against Sexual Harassment in Educational Institutions was also conducted in association with Kerala Women’s Commission. It consisted on three academic sessions.

The first was chaired by Adv. Seemandini V.P., President of Kerala Federation of Women Lawyers. She elaborated on the provisions in the Constitution on Gender Justice, provisions in various statutes that have been enacted for the protection of women and various International Conventions and Treatises on the same.

The second session was chaired by Dr Sonia K. Das, Asst. Prof. Govt. Law College, Thrissur. She shed light on the various legislative measures against sexual harassment in India, its evolution, and gave an overview of the Sexual Harassment of Women at Workplace Prevention, Prohibition and Redressal) Act, 2013.

The third session was chaired by Smt. Lida Jacob, IAS. She dealt with the Implementation of the Legislative Measures against Sexual Harassment in Educational Institutions. She emphasized that implementation is the most important part in a legislative framework and successive implementation can cause a sea change in the existing problems of women.

The Training Programme was attended by academic heads of 50 colleges in the district of Ernakulam. It was an initiative to comply with UGC Recommendations based on Saksham Report, 2013 to create gender awareness and sensitiveness among society.

In February this year, universities and instituted across the country were asked to implement the recommendations of a task force called ‘saksham’, which had suggested amplification of infrastructure and formulating guidelines to deal with sexual harassment cases.

Set up in the wake of the Delhi gang rape incident of December 2012, it had also recommended setting up of a gender sensitization unit within the UGC.

The report can be found here.