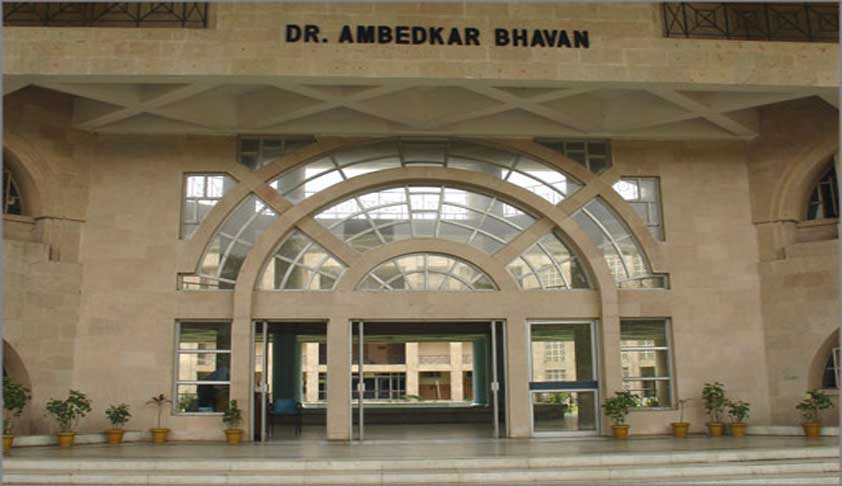 After the revelation of the first ever Review Commission for the West Bengal National University of Juridical Sciences (NUJS), the NUJS Student Juridical Association (SJA) has called for the immediate ouster of Vice Chancellor (VC) Prof. Ishwara Bhat.In a release, SJA has called Prof. Bhat out for being "corrupt, nepotistic, undemocratic and despotic, incapable, and incompetent"....

After the revelation of the first ever Review Commission for the West Bengal National University of Juridical Sciences (NUJS), the NUJS Student Juridical Association (SJA) has called for the immediate ouster of Vice Chancellor (VC) Prof. Ishwara Bhat.

In a release, SJA has called Prof. Bhat out for being "corrupt, nepotistic, undemocratic and despotic, incapable, and incompetent".

Highlighting their disappointment with their VC, the  release states, "Our lived experiences show how several of us have been victims of his blatant casteism and continued inaction against sexual harassment. The hallmarks of his tenure have been three no-confidence motions, stagnation and regression of academic culture, evasiveness and shirking responsibility, destruction of all meaningful engagement with stakeholders and deliberate repression of their voices.

His selfishness and indifference towards the institution is exhibited by his years of efforts to delay the constitution of the long-overdue review commission and his attempt to again evade responsibility by seeking appointment at CNLU (Patna) on receipt of the report from the Hon’ble Chancellor. Unsurprisingly, NUJS suffers from large scale mismanagement and administrative failure today."

It then gives an ultimatum to Prof. Bhat to resign "on grounds of his proven incapacity and moral culpability" by 9 am on 28 March. The students have decided to mark their protest passively, but have assured that in event of his failure to resign, the protest would become more active and vigorous. They have, however, assured that none of this would affect their academics, stating,

"...under no circumstances, shall we be compromising on our academic integrity. To that end, we will be appearing for our mid-semester tests, submitting our project papers and requesting faculty to reschedule our classes so as to not jeopardize our constitutional and educational rights. In course of our protest, we shall not be obstructing the right to work of any faculty or staff member."

The protest comes in wake of the Review Commission report, which notes a "failure of management and administration of a very large scale". The report was allegedly buried by the administration, as the SJA release notes: "To act as a mirror to this institution, a review commission is mandated every five years. Yet, this right was denied to our institution for over thirteen years. It is a testament to half a decade of our struggle that gaining access to the first-ever, statutorily mandated review of a public university was considered a success in itself."

Here are a few issues highlighted by the report:

While abstaining from a detailed discussion on legal education reform in the country, the report does take note of the "crisis facing our legal education system". It says,

"National law schools are today themselves struggling with a serious crisis of quality of teaching and research. They receive, happy, a flood of brilliant students each year. However, there is cute shortage of quality teachers and administrators. The autonomy granted to these institutions is being used, in some cases, less for educational innovation than for immunity from public accountability and concentration of power.

They have failed to deliver radical innovations of curricula, pedagogy, theory or doctrine. Rather than innovate, they are concerned today more on compliance with UGC and Bar Council requirements, including on NET qualification, making them increasingly indistinguishable from traditional law colleges. A nexus between negative elements in the administration and the Bar is emerging in these national law schools, preventing meaningful progress in innovation and experimentation."

It opines that while national law schools have accorded high importance to the issue of academic excellence, they have failed to develop their own frameworks to define, monitor, measure, and improve their own academic quality.

The report then takes note of a statement submitted to it and signed by over 500 students, conveying their "utter dissatisfaction and complete loss of faith in the leadership of the Vice Chancellor" with respect to the concerns raised by them. It cites another similar student statement addressed to NLUs in general, which said,

"Administration of NLUs have subjected students to increasingly stringent rules and regulations while simultaneously reducing facilities available to them... Prof. Madhava Menon established these institutes to improve legal education and nurture a generation of "social engineers". Yet, he continuous fights for basic survival and a right to decent education may leave us too drained and disillusioned to be of any use to society."

This, the report says, "is a wakeup call to each of us involved with legal education". It then lists down several suggestions and asserts that "when the world is at the cusp of disruptive change in legal education, NUJS is a crown jewel of our country that can and must be saved".

The report goes on to note several "risk factors" that are holding NUJS back from doing better. It points out that the college has failed to expand its faculty size and infrastructure, both of which have remained the same since its inception. At the same time, it notes that it has greatly expanded the size of its student body to increase earnings from the fee, in order to meet the rising expenditure.

It further notes, "Some 15% of seats are not lucratively "sold" to NRI sponsored students who get low scores in admissions tests but come with high fees. The consequent over-crowing has naturally adversely affected quality of teaching administration and infrastructure, as well as students life and satisfaction."

Besides, it notes that the faculty-student ratios are "unacceptably weak", noting, "NUJS's student strength has increased 122% since 2002, whereas its faculty strength has increased by only 6% in the same period. NUJS today has an unacceptably low faculty-student ratio of 1 faculty: 22 students. To keep pace with the student expansion, NUJS should have increased its faculty by 55 positions and should have today a faculty strength of 87. NUJS is today short of 55 faculty members based on its 2002 teachers-student ratio."

It then cautions, "NUJS is in danger of slipping into a downward spiral unless immediate and firm corrective action is urgently taken." Therefore, it primarily suggests that quality be protected by temporarily cutting back on new admissions until faculty and resources are adequately augmented.

In order to augment academic excellence, the report emphasizes on the need to shift to a research-oriented academic environment, stating, "The old distinction between research and teaching is disappearing because teaching can no longer be in the mere transmission of information available freely on the internet. Research has therefore become essential to teaching."

It then suggests several measures to enhance academic excellence, including putting on hold admission of Ph.D. students, and appointment of a Dean (Research), a Dean (Teaching) and a Dean (Student Welfare). It further calls for the appointment of an Independent Ombudsman, reporting directly to the Executive Committee, to ensure that grievances are attended to promptly and fairly.

Inadequate representation of women and Muslims is also pointed out, asserting that the reasons for such significant under-representation need to be looked into and suitable remedial action, including reservation, be considered to maintain diversity in the institution.

With regard to the quality of available faculty, the report suggests that the selection process be revised and strengthened, and that a strong framework for accountability of quality of teaching and research be put in place. This, it says, may include introduction of a student course evaluation.

With such issues highlighted in the report, anonymous students have now created a Facebook page for the protests, under the name “NUJS Speaks”, with posts highlighting the administrative inefficiencies during Prof. Bhat's reign. The page also has an account of the first day of passive protests lead by the students, who wore black to show support and engaged in sloganeering ("No Ifs, No Bhats", among others).