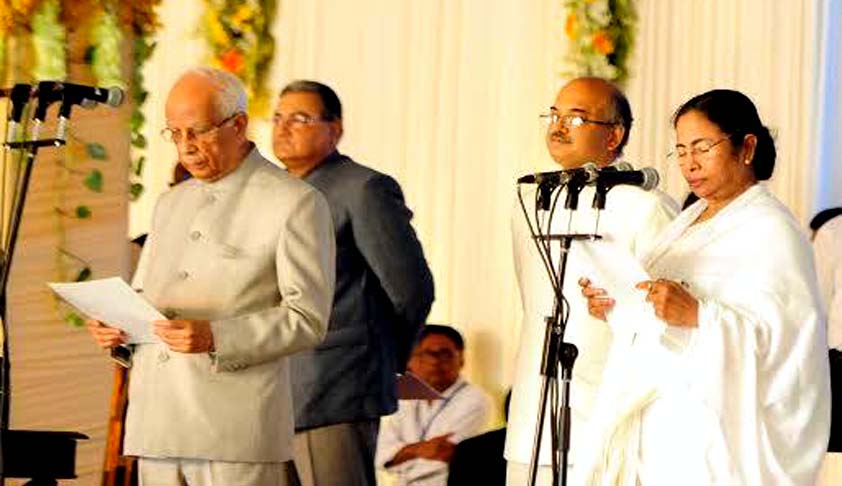 Mamata Banerjee has scored another political point. She has introduced an inventive way of taking the oath in the name of ‘Allah and Ishwar’ combined, in the place of ‘GOD’ given in the form of oath as mandated by the Constitution. By this stroke of oath politics, she has pleased her two major constituencies. Though the act illustrates her political astuteness, one can foresee the...

Mamata Banerjee has scored another political point. She has introduced an inventive way of taking the oath in the name of ‘Allah and Ishwar’ combined, in the place of ‘GOD’ given in the form of oath as mandated by the Constitution. By this stroke of oath politics, she has pleased her two major constituencies. Though the act illustrates her political astuteness, one can foresee the legal challenges ahead. We may also see her lawyers taking shelter under ‘Ishwar Allah Tere Naam’, and wake up Gandhji for this reason.

Under any democratic system of governance, the oath of office and oath of secrecy are sacrosanct. It is treated as the proof of your allegiance to the constitution and the principles embodied. It’s more of symbolism rather substance. Ultimately, the Nations are run more on symbolism and braided ceremonies, which worked always as a catalyst for pumping patriotism.

The ‘form of oath’ given to us by constitution makers provides only two options, either ‘swear in the name of God’ OR ‘solemnly affirm’. Since term ‘GOD’ is too wide to interpret, the oath taker gets enough room to play around and install any ‘God ’ or even ‘Demigod’ of her choice in the place of ‘GOD’ to witness and confirm her allegiance to the Constitution. The relevant format is “ I, A.B., do swear in the name of God/solemnly affirm that I will bear true faith solemnly affirm and allegiance to the Constitution of India as by law established”.

The improvisations of oath, substituting the word ‘GOD’ with ‘Allah’, ‘Guru’ etc have met with serious legal challenges reaching the issue even up to the Supreme Court. In a Kerala case, a legislator took oath in the name of ‘Sree Narayana Guru’ a revolutionary social reformer in the history of Kerala, proclaiming that he found ‘GOD’ in his Guru. Unfortunately, in the legal challenge, the High Court found that Guru by any means can’t replace the ‘GOD’. It was held that the constitutional format does not have such elasticity to install whosoever in place of GOD. Though the said judgment was carried in appeal to the Supreme Court, and also the Court felt it as matter of great constitutional importance, the case ultimately became infructuous as the legislative term ended in the meantime. Incidentally, I must mention that many such cases, particularly the Petitions challenging Elections, are won by being infructuous and not on merits.

In another case from Kerala, 16 MLAs of Muslim League, who won 2006-Assembly elections, took oath in the name of ‘Allah’, triggering another Writ Petition. The Writ Petitioner relied upon a judgment rendered by an earlier Division Bench of the same court in Haridasan Palayil vs The Speaker, Kerala Legislative Assembly, which held as“ A Member of the Legislature, Union or State, represents a constituency. He is the spokesman of all the people belonging to the area. He has to stand for all, irrespective of their shade of faith and religion. He is the people's representative. He is not free to cater to the belief of a sect or section of the society. He does not represent the Christians, Hindus or Muslims only. But even the Buddhists, Jains and all others. By the very nature of his office, he is bound to inspire equal confidence and faith in the minds of all. The perception of God has to be as that of the entire people. Not personal. The society at large and not merely the 'Assembly' must get the confidence that the legislator shall work under the fear of 'God' as understood by all and not by him as An individual. This is essential to ensure that he represents everyone, irrespective of the caste or creed, faith or religion, it is meant to help in maintaining national harmony. It is intended to foster Unity in Diversity so as to preserve the integrity of India as a country. That is the apparent rationale and reason for the prescription of a 'Form' in the Constitution. And then, why does the provision provide for a penalty? For the reason that the Constitution does not permit any deviation. It insists upon a strict compliance. A deviation is not a mere irregularity. It is a manifest illegality. Thus, every person has to conform to the 'form' as prescribed. Otherwise, it has to be assumed that he has not taken the oath. He has not duly entered upon the office”.

The view taken above was corrected later by the High Court in Madhu Parumala vs Speaker, Kerala Legislative Assembly (2006). The learned Division Bench held “ We reiterate that when a person takes 'oath as per Form VII B of the Third Schedule to the Constitution it is purely personal and not on behalf of the voters of the constituency. By the sacrosanct act of oath or affirmation, he is binding himself (and not his electorate) against any breach of the pledge which he has undertaken. The oath which is thus personal as against the oath-taker cannot and is not expected to bind other believers in God, agnostics and atheists in the constituency which the oath-taker represents and he alone incurs the consequences of any breach. We are therefore unable to agree with the reasoning that the prescription of God that we get in the form is general and not personal because the constituency consists of not only believers in God, but also atheists”.

The Court finally found ‘Allah’ being the ‘GOD’ of the oath taker, nothing unconstitutional about it. If this logic is applied and stretched a bit, there is nothing wrong if oath is taken in the name of ‘Ishwar Allah’. P.V.Dinesh is a Lawyer in the Supreme Court of India.